This past Saturday, London moved into the “Tier 2” category of the three-tier system the government recently introduced in an attempt to simplify COVID-19 restrictions. They’re obviously trying to avoid going into full lockdown mode again, both for the economy’s sake and also because so many people have “quarantine fatigue.”

As opposed to what happened at the end of March, when we went from being able to do anything to being able to do almost nothing, this weekend’s rule change felt like a lot of smoke and no fire. They got everyone all freaked out by announcing on Thursday that new restrictions would go into effect on Saturday, but basically nothing has changed from last week to this week other than we aren’t allowed to socialise with people from other households indoors anymore/again. The “Rule of Six” still applies outdoors.

They haven’t closed any businesses (or schools, thank goodness), and I’ve still seen plenty of people who are definitely not in the same household meeting up for coffee inside a coffee shop, or for Sunday lunch inside a pub. While this is technically illegal, what are the people who work in a restaurant going to say? They need the business.

It’s a strange world we’re living in when people can go work out in a gym or small fitness studio with no masks, or go to a pub for drinks (but only till 10 p.m., that’s apparently the hour when the virus becomes more contagious), but we can’t throw a simple 4-year-old birthday party at home with a few of our daughter’s little friends.

After we heard the news on Thursday, it was a mad scramble to move a group children’s birthday party from what was supposed to be one day this week to last Friday, and turn it into a celebration for ALL the children attending the party, because they are all turning 4 in the next month or so, and this was possibly the only chance we’d get to give them a birthday party.

We pulled it off, and I’m so happy we did, even though I couldn’t even attend (because, Rule of Six). Now R can feel like she did get to have a birthday party celebration with her friends, even if it was a couple weeks early.

We could still host something outside, but our family is already four people, so she could only have two friends… and also the weather in London in the beginning of November is not usually conducive to an outdoor party.

I’ve also been putting a lot of thought into ways we can still celebrate Halloween, safely, but also so the kids don’t feel like they’re totally missing out this year. No authorities have actually come out and said “no trick-or-treating,” so we may still go begging for sweets, but probably just to houses of people we know. If we are outdoors, and in a group of fewer than six people, then I don’t know why this would be a problem. But certainly Halloween will be a little, well, less overall this year.

Remember the “mouse hole” (aka Victorian boot scraper) on our road that we invaded a few months ago? It was a big hit with the neighbours, and I’ve had nothing but positive feedback and accolades from people about it. With half term next week, culminating in Halloween, it felt like it was time for another mouse pop-up party, and we made it a spooky one.

I used the same pattern as before for hand-sewing a little felt mouse, but gave her pointy black “boots” and a little black witch’s hat and cloak.

Aside from the cauldron, which I ordered online, I sourced everything from stuff we had in the house.

I made the broom out of half a bamboo skewer and some straw I cut from our actual broom. The potion bottles were tiny glass glitter containers that came with some children’s art project kit at some point. The coloured glitter was already inside, so I just added water, and a bit of green food colouring in a couple. They’re nestled in a bottle cap from a container of children’s vitamins, lined with felt and trimmed with orange ribbon.

Plenty of googly eyes, plus some glow-in-the-dark cobweb and a bat taken from my box of Halloween decorations added some haunted house flair. A battery-operated candle with a timer and a miniature “pumpkin” taken from my autumn vase filler completed the scene.

I was hoping we could get it all set up without anyone seeing us, but we chose the wrong time of day for that. Lots of people went by, and many commented on how much they love this idea, and were excited we were back.

And I finally met the owners of the house, which I had been nervous about, because I didn’t exactly ask permission to decorate their private property. But the first thing they said was, “We missed the mice!” Phew!

Well, the kids are back in school (hallelujah!) and life is taking on some form of return to normality, or what counts as normal in Autumn 2020.

There are many things we still can’t do, or shouldn’t do, or just don’t feel personally comfortable doing even though other people are; but then there are some things we can do again, with certain precautions, that we haven’t been able to do since mid-March. You follow?

Well, we made it back to London. (If you didn’t read my account of flying from the U.K. to the U.S. a few weeks ago, you can read it here.)

There were definitely more people around, in both the airports and on the plane, on our trip from Dulles to Heathrow than we saw going west in July. I think we saw a lot more people in the Washington Dulles airport this time because we weren’t in an international-flights-only area of the terminal; there were plenty of domestic flights departing from the gates around us. END_OF_DOCUMENT_TOKEN_TO_BE_REPLACED

And on the 80th day (which was this past Tuesday), R went back to nursery school, effectively marking the end of this period of isolation for our family.

She was so excited. We had talked about how things would be different there, and she seemed fine with it, as long as she got to go back and see her friends and her teacher. Hearing my 3-year-old ask about seeing her best friend again, “Can I touch her?” was just heart-wrenching. END_OF_DOCUMENT_TOKEN_TO_BE_REPLACED

My kids and I have often walked past this house on our road and wondered about this curious little hole next to the front door.

It’s not connected to a drain pipe or anything at all. Is it some sort of coal hole? The place the milkman left the milk bottles? A Floo Network portal to the Ministry of Magic, house-elf service entrance?

The girls and I decided a while back that it must be a very fancy mouse hole, for a very posh mouse.

So last week, we made a mouse and some decorations and moved him in. (Free pattern and instructions for a hand-sewn felt mouse found here.) 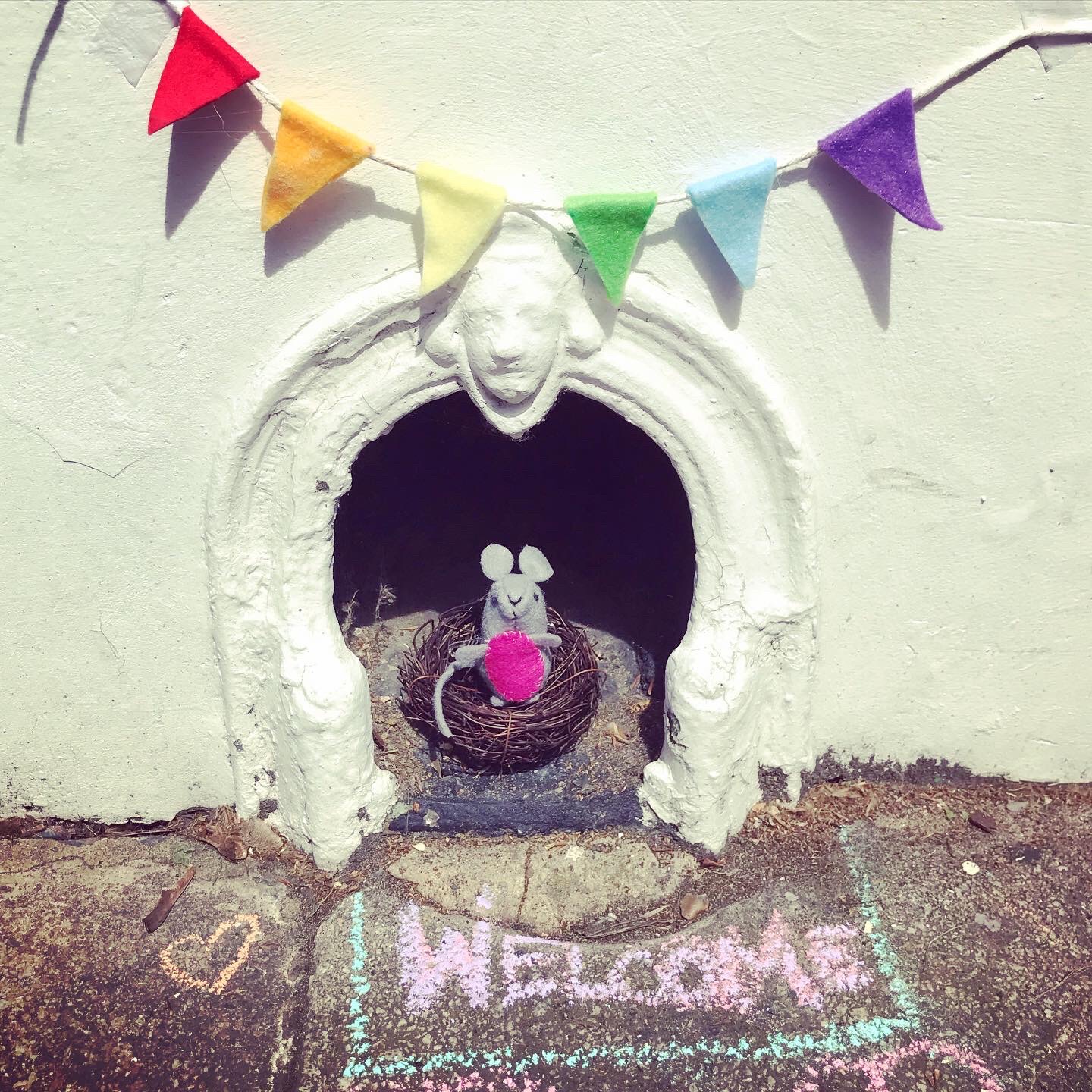