Well, we made it back across the pond and to Virginia on Sunday. Deciding whether or not to make the journey back to the States this summer to visit family was probably a harder decision than when we were offered the opportunity to uproot and move to London with a 3-year-old and another baby on the way. More complicated.

Obviously, flying during a pandemic is risky; however, at the current time, the only people allowed to enter the U.S. are U.S. citizens, and Americans entering the U.K. are required by law to quarantine for 14 days, so direct flights between the U.S. and the U.K. are practically empty.

(BTW, I’m looking into donating to a carbon-offset project, because I feel pretty guilty about flying on a nearly-empty plane.)

Non-essential businesses have only just started reopening in London this month, and for the time being, the U.K. has things relatively under control.

The U.S., clearly, does not. But fortunately the area my in-laws live in is not a big crowded city, and we are pretty much just staying put at their house. We recognized that this could be our only window for the rest of 2020 for flying to America to see our family. And while being locked down and not able to get to each other, we realized just how far away we really are. We decided it was important to go while we have the chance.

We took a black cab to London Heathrow Airport, which was the first time any of us had been in a vehicle since March. That was the beginning of a long day of mask-wearing.

Heathrow wasn’t a total ghost town, but it certainly was less crowded than I’ve ever seen it, particularly during summer holiday season. We breezed through check-in and security with hardly any time spent waiting in line. Actually, I’m not sure we waited in line at all. 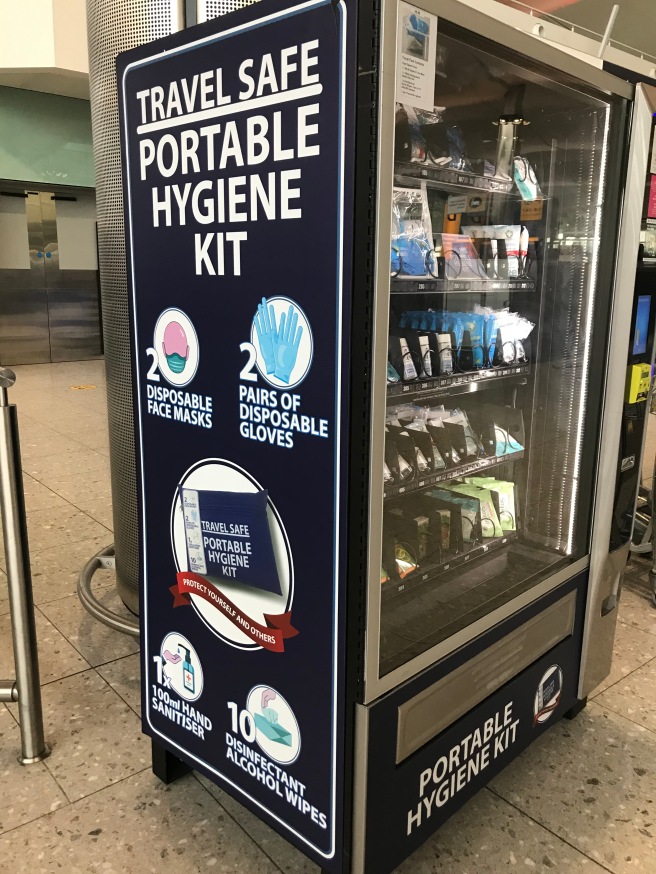 Only a handful of shops and eateries were open. It seemed kind of random which ones were open. Boots drugstore being open makes sense, for when you need to buy new contact solution because the security guy confiscated your American 4 oz. “flight-safe” bottle of contact solution, because that is 118ml and the E.U. limit is 100ml.

But the other places I saw that were open were a Leon restaurant and a Thomas Pink men’s clothing shop. In case you fancy upgrading to a natty Thomas Pink face mask?

There are hand sanitizing stations set up all over the airport, vending machines are selling “portable hygiene kits,” and every other seat is closed in the waiting areas, to encourage distancing from others. Not that we had to worry about that.

The kids were disappointed that the play areas were closed, but then, they’re pretty used to hearing “No, we can’t do that, it’s closed because of coronavirus” now, so they accepted it without much fuss.

We were handed individual disinfecting alcohol wipes as we boarded, to wipe down our seat area, but I’m sure all of that had been cleaned by the crew already. It was the newest, cleanest plane I’ve ever flown on, no question. Also the emptiest.

We were required to wear masks on board the entire flight, except for when we were eating and drinking. The service was reduced, but not entirely omitted. The flight attendants came through with the drinks cart and the meal cart together once near the beginning of the flight, and once again near the end. But that was it; no duty-free sales, no coffee and tea tray, no water top-ups. We could go to the back of the plane to get more tiny bottles of water when we needed them.

Honestly, wearing a face mask that long wasn’t as bad as I’d feared. We packed multiple for each of us (our 3-year-old didn’t have to wear one), so we could change into a clean one every few hours. If my 7-year-old can wear a mask for 12 hours, you can wear one to the grocery store, Karen.

When we needed the bathroom we used toilet seat covers, washed our hands well and used hand sanitizer, and prayed to the patron saint of airplane lavatories and lost causes. At least we didn’t have to share the bathrooms with many other people, and we never had to worry about passing someone else in those one-person-wide aisles.

When we landed, we remained in our seats while they decided if they were going to deplane us one row at a time, but then they seemed to decide that was unnecessary because there were so few people on board.

On our arrival at the customs and passport control area of Dulles Airport, we had to stop at a health screening station. We handed over the “travel health declaration” forms we’d filled out on the plane, answered a couple questions, and had our temperature checked and recorded. 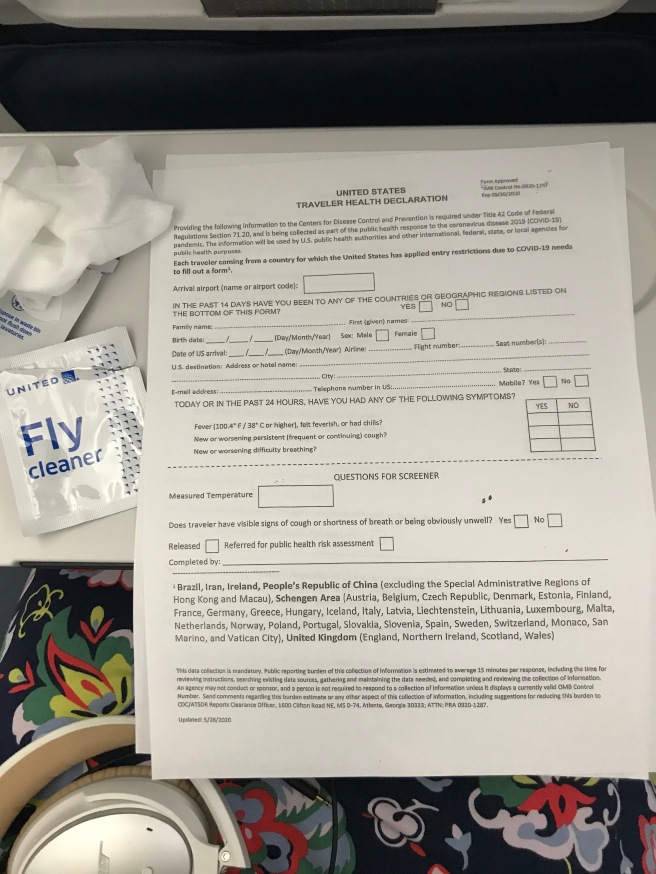 We all registered right around 98 degrees F, so we were waved on through to the regular customs and passport check line (which of course had no line that day).

And that was it. After collecting our bags, we were finally reunited with M’s parents, and could unmask as soon as we got to the car.

We’ve got three weeks here, and then our return flight to London, where we will have to quarantine in our house for 14 days. That won’t be fun, but we know it’s doable, because we’ve already done it, and for a lot longer.

And the looks on my children’s and their grandparents’ faces when they finally got to hug each other tells me it’s worth it. 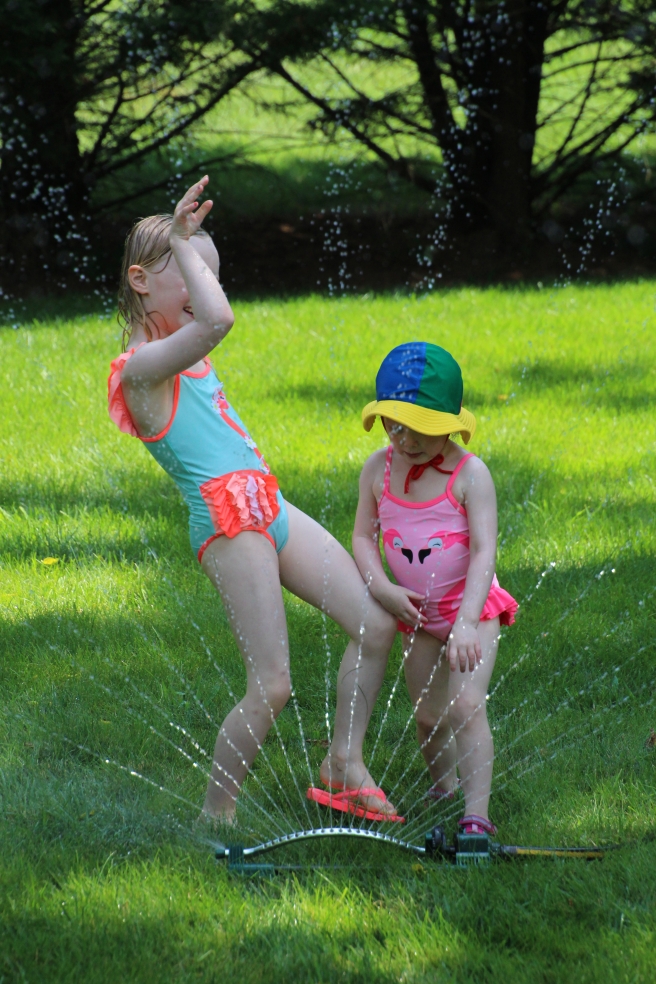 One thought on “Flying From the U.K. to the U.S. During the COVID-19 Pandemic”