After Boris Johnson’s televised announcement last Sunday evening, restrictions have begun to ease a bit in the U.K.

The prime minister was quite vague in his Sunday speech, and left a lot of people with more questions than answers. It wasn’t until Monday evening that the government published a 50-page document outlining the recommendations, and offering some clarification, and held a news briefing Q&A.

I mean, what’s not to understand about a 3-step plan consisting of “Stay Alert, Control the Virus, Save Lives”? Easy peasy.

We probably shouldn’t have let 3.5-year-old R be in the room with us while we watched the news briefings on Sunday and Monday, because not only did she make it hard for us to hear the TV, but also she picked up on the phrase “control the virus” and was walking around the house repeating it in a creepy loud-whisper voice.

What I personally took away as the highlights of the new rules:

Wearing masks was notably absent from the Sunday night speech. There’s still a surprisingly small percentage of people wearing them in public around here.

We started seeing some changes pretty much right away this week. There’s noticeably more traffic on the roads.

We’re getting emails from lots of local businesses and services that have been completely closed, informing customers that they are reopening in some form. More restaurants offering takeaway food, the dog groomer now taking bookings if you can drive your dog there, etc. I got an email from the local tennis association saying it’s now possible to book a one-on-one lesson with a coach, or to book a court for playing singles, or doubles with a partner from your household.

It looks jarringly normal at the common, with people now able to picnic and sunbathe. Many of the DO NOT SIT signs have disappeared from the benches.

It feels like an alternate universe in a sci-fi story, where everything looks normal, but it’s not. One sighting of someone wearing a mask and I’m snapped back to reality.

Schools are making plans for at least some students to return to the classroom on 1 June, in just two weeks’ time. What that will look like depends on what the school can do to keep the numbers down and keep children at a distance from one another. School officials must be scrambling to try to come up with an achievable plan.

E is in Year 2, so it doesn’t look good for her returning to school before September, but R’s nursery school is going ahead with plans to open its doors in two weeks’ time. We have not yet decided whether or not to send her. There are quite a lot of pros and cons for both sides of this decision.

The easing of restrictions feels like it’s happening too soon, in my opinion. I read an analogy comparing this to an injured athlete trying to get back into the game too soon, where instead of taking longer to properly and completely heal, the athlete jumped back in too early and ended up doing permanent damage.

But only time will tell whether we should have waited longer.

I know everyone around the world is debating this topic, and weighing up the risks and benefits of reopening businesses and lifting stay-at-home orders, because of course the impact on the economy is tremendous, and so many people are no longer receiving a paycheck, and we’re apparently facing a mental health crisis directly correlated to all of this.

R has become so well trained to keep 2m from other people that she gets upset if people get too close to her. This is helpful right now, sure, but I’m growing concerned that this will have some sort of permanent effect on her psyche, and she will forevermore have some level of phobia of getting too close to other people, whether that’s mental or physical in manifestation. But that’s just one of the many fears parents are experiencing over how this is going to affect our children and their generation as a whole. I know I’m not alone in this.

So. After all that (you still with me?), I think I’ll shift the tone here and do another list of the

1. The ducklings and baby coots (cootlings? cooties?) in the nearby pond.

The girls and I have been going nearly every day for the past week to watch them, feed them (I was able to get duck and waterfowl food from the local pet supply shop), and repeatedly remark on their cuteness and how fast they are growing.

There are two sets of coot parents with two babies each, and one mama duck with nine ducklings to look after. That’s a lot of kids constantly asking for a snack or screen time. I see you, Mama Duck. You’re doing great.

You too, coot parents. I see how hard you work on building that nest, and it still looks a hot mess no matter how much time you spend on it.

R loves the baby ducks and coots, but is much less tolerant of the pigeons.

Just when you think you have done a good job fostering a love of all creatures great and small… your 3-year-old maniac proves you wrong.

2. Seeing people smile as I cycle past them with this crew. After all this time, I finally tried taking Wren in our family trike, and she doesn’t hate it like I thought she would!

3. Our mini philanthropist. E managed to save up £20 in her “DONATE” jar, and she chose to donate it to Little Village, a charity that helps mothers and children in London, and is struggling to meet the increased demand right now. So proud of her.

4. Discovering audio entertainment with my kids. Since we’re trying to limit screen time outside of learning times, we’ve started listening to audio books and podcasts together, and two in particular have been a pleasure to listen to for both the kids and for me.

From the library’s online ebook service, we borrowed the audio book of Louis Sachar reading all three of his Wayside School books, which I loved as a kid. Revisiting these books from my childhood with my own kids has been such a delight. It’s over 8 hours of audio, and I think we listened to it three times before our library loan expired. I can’t believe how much R loves it at her age, but she does.

And a new Wayside School book just came out, 40 years after the first one was published(!), and we’re now reading that together on the Kindle.

We have also been listening to “Wow in the World” from NPR, sometimes several in a day. And R saying “Can you put on a podcast, please, Mommy?” is the most hilariously pretentious thing to ever come out of a 3-year-old.

5. Trying new things in the kitchen. I made my first ever batch of jam and successfully canned it! 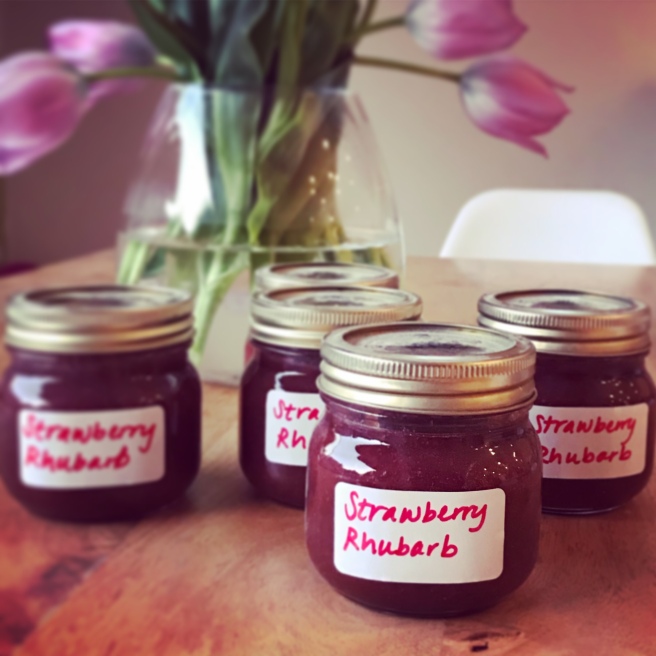 Next up: get started on that sourdough starter.