Well, it finally happened. We knew it would. Boris Johnson announced last night that London is going into lockdown for three weeks, effective immediately. If we are not essential workers, we are allowed to leave our houses just once a day, for the purpose of going to the grocery store or pharmacy, or for exercise such as walking, running, or cycling. Non-essential shops would all be forced to close. Playgrounds and outdoor gyms are now off limits (finally). People are not allowed to be out together in groups larger than two, aside from families.

Thank goodness they haven’t closed the parks entirely (though that could be the next wave of restrictions, if people don’t behave themselves this time). If they take away M’s ability to ride his bike around Richmond Park in the early morning, my husband will LOSE THE WILL TO LIVE.

I knew stricter measures would have to be enacted, because there have been way too many people flouting the recommendations regarding social distancing. Though it’s not entirely the fault of the public; the UK government has not been too clear or too strict on the rules. If there aren’t consequences, then there will always be people who continue to disregard the “laws” of the “lockdown.”

One thing that really irks me is that BJ made construction workers exempt from this lockdown, and the construction on the house immediately attached to ours continued as usual today, with quite a few construction workers there, not distancing themselves at all, smoking outside our front door. I understand making an exception for construction workers on important, necessary projects, but someone’s multimillion-pound home remodel (they’re not even living there right now) hardly seems essential.

I took the girls out for our government-approved daily exercise excursion this afternoon, and it appeared to me that most people seemed to be playing it safe. There were significantly fewer people out than usual around here, especially since it was a sunny day and the warmest it’s been in a while.

For the first time, no one was in the playground. But there were still people using the outdoor gyms on the common, including children who decided that was a reasonable alternative to the playground. Sigh. There’s no physical barrier around those, so I guess that makes them harder to close. 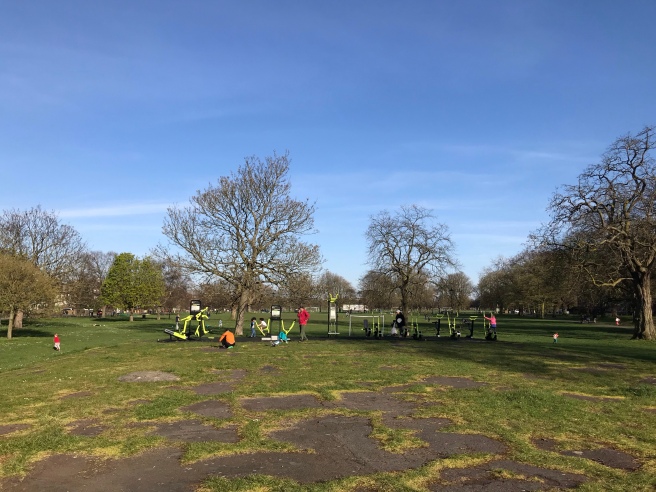 In terms of enforcement, there aren’t military officers marching up and down our street or patrolling Clapham Common, at least not yet. I did see a police cruiser cruise by the house when we left, and there was also a helicopter flying slowly around the area for a while (felt like Baltimore!).

One silver, non-hazy lining to this mess of a March: I’m very much enjoying the reduction in traffic and air pollution! The air smells and feels clearer, it’s noticeable. And I feel like I can actually let E ride her bike in the road with me now, and get some practice and build her confidence.

We meandered slowly around an eerily quiet neighbourhood, past the closed shops, and I couldn’t help but wonder how many of these small businesses will never be able to open their doors again.

I cannot imagine a better group of class parents. Going to miss these ladies so much 😭
Smizing after dose numero dos! Thanks, @batterseaartscentre 💉 🌈
Generally, when you plan a picnic boat ride for an evening in July, you’d expect it to be nice weather. #greatbritishsummer 🇬🇧 ☔️ 🚤
Less than a month left as a Londoner… so naturally I’ve been leaning in pretty hard to the London Ladies Who Lunch persona. I’m about one amuse-bouche away from my husband canceling my credit cards. 🥂🍽
Follow Walks Between the Commons on WordPress.com
Loading Comments...
%d bloggers like this: