{My Anecdotes are posts in which I comment on my observations of unexpected cultural differences, or just amusing incidents that don’t really warrant their own individual blog post.}

1. Well, today is finally The Day. Brexit deadline is finally here, for real this time! No more extensions! Except that no one really knows what’s going on or how things are going to change or what it will mean for them, personally. It’s still a mess that no one knows how to handle.

Back in the autumn, when the deadline was 31 October, I started stockpiling some food items, just because everyone else was. I bought a bunch of canned food, and a whole lot of extra virgin olive oil.

But then it didn’t happen, and eventually I started dipping into my stores of oil and tinned tomatoes, and haven’t restocked. The moving Brexit deadline feels a bit reminiscent of Y2K. People freaking out over a deadline that they’d been whipped into a frenzy of worry over for a long time, and then nothing happens.

In reality, no one seems to know what this will mean for those of us living in the UK, whose citizenship or visas mean we aren’t worried about being kicked out of the country. What it will mean for us, personally, in our daily lives? How does it affect us financially? Will we still be able to get fresh oranges and tinned tuna from Spain? French wine? Italian tomatoes? I don’t know. We can’t stockpile fresh fruits and veg anyhow. And at least for the rest of 2020, the UK will continue to trade with the EU as usual, kicking that can down the road a bit.

But of course that’s a nothing worry considering there are people this will actually affect in a significant, meaningful way. My thoughts are with them as the deadline looms and their anxiety mounts over what this will mean for their future.

And of course, as an American citizen whose children are also American citizens, I’m more concerned about the current clusterf— going on in our home country, what with this impeachment trial.

If you look at the Wikipedia entry for the U.S. Senate right now, there’s been a most… heroic, one might say, edit today:

I was awakened last night at 11:00 p.m. by fireworks going off somewhere not too far away. It was the minute the UK left the EU. So some people in London were certainly celebrating. Here’s today’s paper I picked up (I obviously choose the liberal media):

2. When there’s a Michelin-starred pastry chef baking for the nursery school bake sale, is there really any point in baking something yourself? This takes things up a few levels.

I bought the cake. Of course I did.

Only a £10 donation for an entire cake made by a Michelin-starred pastry chef, I just couldn’t pass that up! Plus I was going to a dinner party that night, so I felt that gave me a reason to buy an entire cake. Unfortunately, this was a dinner party of six ladies, so only the smallest dent was made in this massive cake. Now M is working on making a larger dent.

3. As I’ve mentioned before, in our affluent neighbourhood, the most popular car amongst the yummy mummy set is the Range Rover. Also known as a “Chelsea Tractor,” because why would you need a large 4-wheel-drive vehicle when you’re pretty much only driving it around a small urban area? (And have to park it on the street.) The most common crime committed in our neighbourhood is stolen Range Rovers, taken in the night. Anyway, that’s not the point of this story.

The point is that a couple of weeks ago, I did a double take as I was cycling my children to school, because I saw what appeared to be a Range Rover covered in black velvet. No, I thought, I must be mistaken; that is surely too absurd to be true. But later I Googled it, and lo and behold, it is, in fact, A Thing: 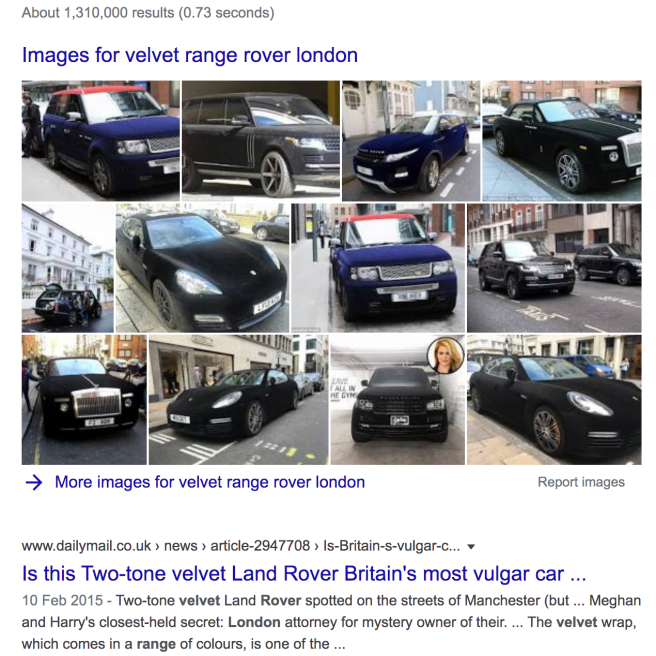 So yeah. What do you get the mummy who has everything for Christmas? You get her luxury vehicle wrapped in luxury fabric, of course.

I have absolutely no idea how they wash their car now, and I’m thinking black velvet is going to look pretty tatty after just one day of driving around a city, especially one where it rains a lot, and where you have to park on the street.

3. Someone made a fake dust jacket and swapped them out for the real thing on David Cameron’s autobiography in a bunch of Waterstones book stores. Absolutely hilarious. (NB: I don’t know who to credit for these photos, as they were forwarded to me.)