In London at Christmastime, you can be both, all in one packed week. I’m clearly setting out to confuse Father Christmas right down to the deadline.

After doing my part for our class’ table, I took the girls around to the Christmas-themed game booths, such as Hook-a-Bauble. 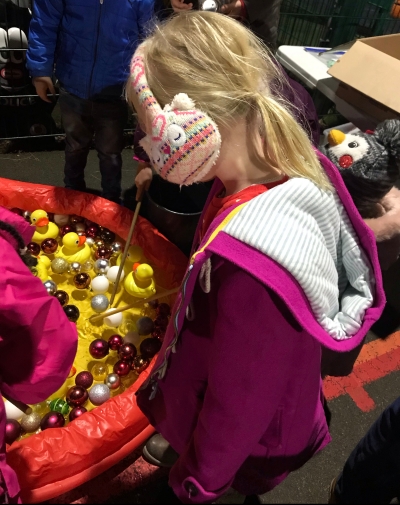 But after the kids were nestled all snug in their beds, with visions of sugarplums dancing in their heads, instead of settling down for a long winter’s nap, three of us mamas donned sequins (not kerchiefs) and headed out to the Bethnal Green Working Mens Club.

Walking into that club was like stepping back in time, because it looked like a room that was decorated in the 1970s, and they like it that way.

It’s historically a very LGBTQ-friendly club, and hosts a lot of shows there. We three girls were blinged out in sequin dresses, but we knew we wouldn’t be the most over the top guests there, and we were right. Performers aside, many of the audience members were also dressed to attract attention.

Our outfits were so shiny, the flash from my phone caused lens flare in our pictures 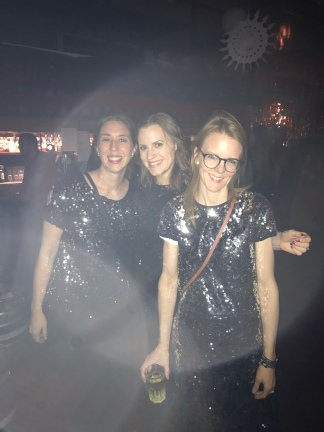 Our outfits were so shiny, the flash from my phone caused lens flare in our pictures.

The Mariah and Friendz show was a mix of drag queen performers, burlesque, cabaret, some sort of aerial acrobatics, and random other performances, most of which were too naughty to share on this family-friendly blog. I can no longer say I’ve never seen a woman light her pasty tassels on fire and twirl them around.

But you still can, because I didn’t film that part, sorry.

But don’t go thinking I’m that wild… the show didn’t start till 10:15, then took a break from about 11:15, and we made it to about 11:45 before calling it a night. The second half of the show hadn’t even started yet, and there were only so many ‘70s disco hits we felt we could dance to while waiting for the performers to come back on. We did have children that would be waking us up in a few hours, after all. I’m pretty sure most of the crowd there did not have that problem.

The next day, I enjoyed several hours in the printmaking studio at a Christmas linocut workshop. I’d gone to a printmaking workshop there in the summer, and loved it, and jumped at the chance to do a Christmas-themed one. We could make cards, wrapping paper, and tags.

My London double-decker bus Christmas scene looked all right on the cards I printed, but it looked even better on the tags, which turned out to be the perfect size for it. 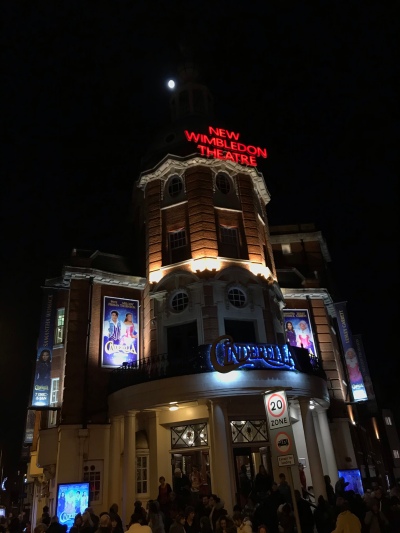 This was our third year attending a “panto,” one of my favorite and very English Christmas traditions. Like last year, we took E but left R with a babysitter. This year’s panto at the New Wimbledon Theatre, where we’ve gone the previous times, was Cinderella. 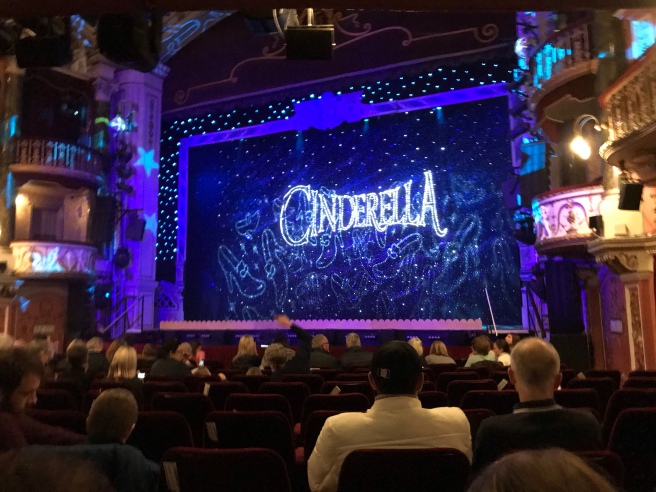 I didn’t know until this year that all the different pantomimes that play at theatres around London are all actually put on by the same company. It’s a fully staffed year-round operation that writes the shows, does all the casting and costumes and sets and everything, and the theatres contract with them.

Pantos typically star D-List, or as they say here, Z-List (pronounced “Zed-List”) celebrities I’ve never heard of. The featured actors in Cinderella this time were an actress known for her role on “Eastenders”; “Britain’s best soprano” opera singer; a magician/comedian who has appeared on various reality/talent-competition shows; and Cinderella was played by a former member of the pop group the Pussycat Dolls. Allll right. 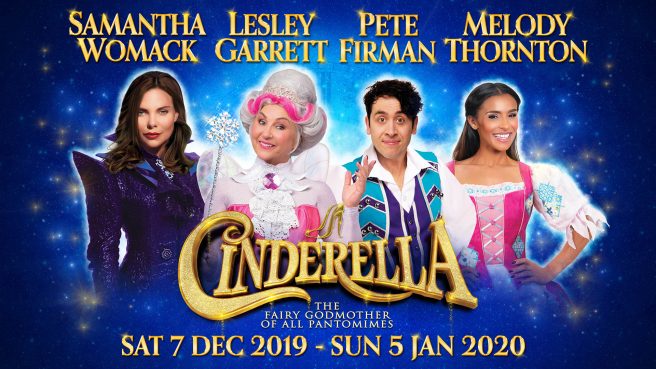 It had all the cheesy, over-the-top, purposely-ridiculous hallmarks of a panto that I’ve come to expect and enjoy. Bright, glittery, and loud; men dressed up as really ugly women; and a fair amount of making the audience feel awkward and embarrassed when it came to forced participation. Slapsticky humour for the kids, and rude humour for the adults, which, hopefully, goes over the kids’ heads.

I don’t get why this is a Christmas tradition here, as it doesn’t seem to have anything to do with Christmas, but I like it anyway. 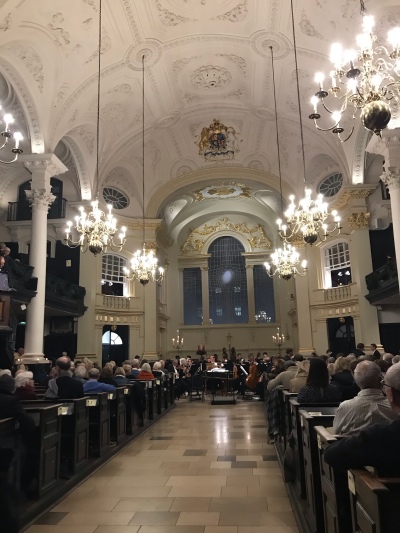 On Thursday evening, I had two tickets to a Christmas concert at St Martin-in-the-Fields, the lovely church by Trafalgar Square. Unfortunately, I couldn’t find anyone to go with me, because most people are more sensible than I am and don’t go out four nights in a row. Clearly I suffer from some sort of Christmastime FOMO and am careening merrily towards a New Year’s burnout. 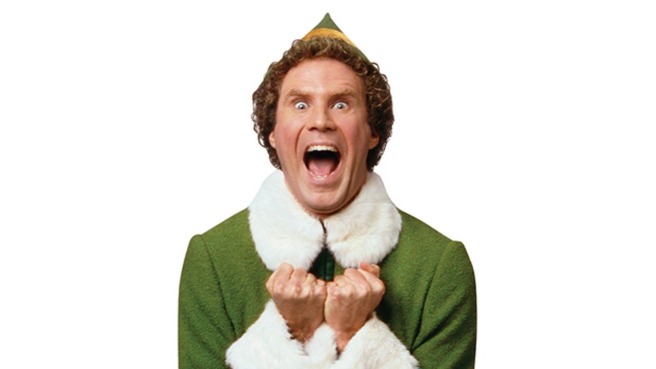 So I went by myself. And it was really nice! I didn’t talk to anyone, I didn’t even bother to put on makeup; I just enjoyed the music.

St Martin-in-the-Fields offers lots of different concerts throughout the Christmas season, featuring different musical groups. This particular night brought together the Thames Chamber Orchestra and the Choir of Christ’s College Cambridge. In between musical pieces, an actor read Christmas-themed poetry. And after the interval, the audience was invited to join in on some carols, as well.

6. Friday–Saturday: 3 Christmas Parties in 2 Days (A Bit Naughty, at Least for Our Livers)

Not much to say about this one, other than whoa. Christmastime in England is quite boozy.

Saturday was back-to-back parties at friends’ homes, and Friday night was our class Christmas party for the parents of E’s class. It was in a pub, where thankfully we had a private room. English pubs at Christmastime can be either delightfully cosy, or packed with drunk people wearing silly Christmas jumpers and paper crowns that fell out of Christmas crackers, who have obviously been drinking since lunch. This place was both. When we walked in, we saw the latter, but fortunately we had a room off the main bar area to ourselves, which looked like this: 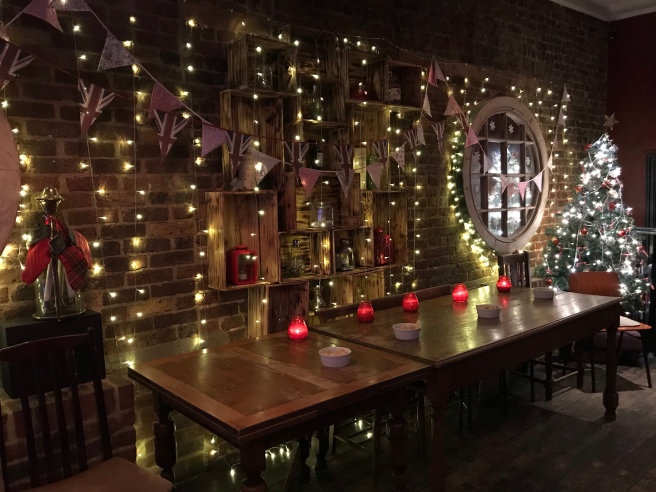 7. Sunday: The Snowman (Quite Nice)

I took E to see The Snowman last year, and we loved it, so this year all four of us went. This was R’s first full-length theatrical experience, and she was mesmerized.

I had bought the book to introduce it to her in advance, and we’d also watched the 1982 film, so she was familiar with the (wordless) story and the music. 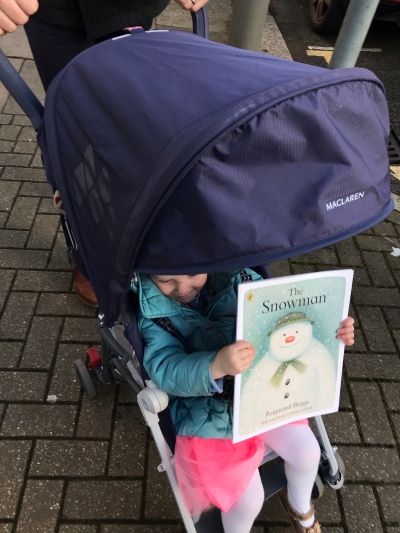 The show at the Peacock Theatre is so well done. There are no words, just like in the book, but it still captures the children’s attention. It’s sort of part-play, part-ballet. And R is now doing ballet club at nursery school, so she very much enjoyed seeing real ballet dancers. 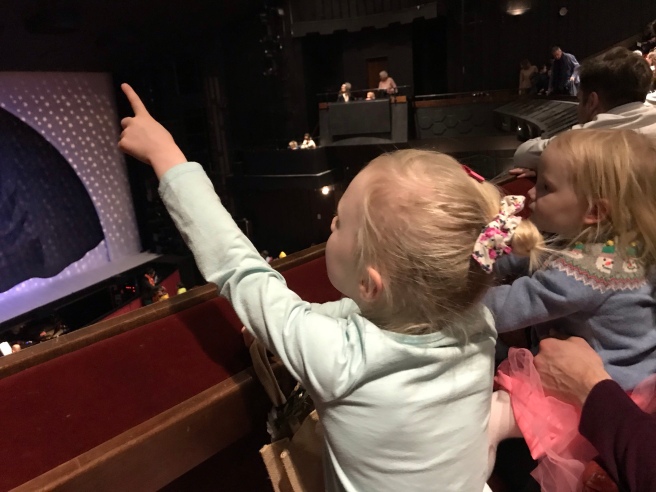 The super cool thing about it this year is that a Year 5 boy from E’s school is starring in it. Unfortunately, we had bought tickets well in advance of him even getting the part, and he wasn’t performing in the particular show we had tickets for.

So that was our crazy week of Christmas activities in London for 2019.

I figure that somehow finding the time in this crazy week to bake Christmas cookies for the school charity bake sale might tip the scales more towards the Nice List, so I’m probably OK. Not to mention having the patience of a saint while helping two sticky children construct this in my kitchen. 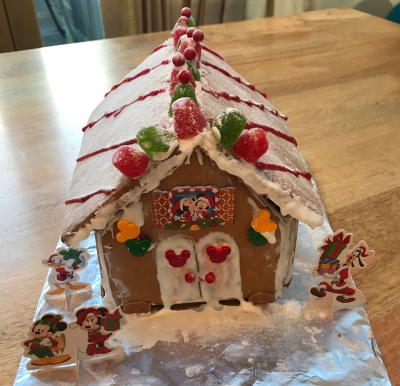 Now please excuse me while I go unwind by watching a TV show about murder.

🐭 nicked again 😢 #wakehurstmousehole
[Zoolander voice] MerMOUSE! 🐭 🧜‍♀️ #wakehurstmousehole [undersea background credit to my 4yo and her generous sharing of her stickers]
A long-awaited grownups-only lunch @trinityoutside with @lauraaisling82 🥂
Coffee is calling ☕️
Follow Walks Between the Commons on WordPress.com
Loading Comments...
Comment
×
%d bloggers like this: