Well, technically, we took the ‘glamping’ option, which was my preference, because everyone knows

Anyway, one of the families in E’s class organised this big camping trip in June at a campground in Sussex, not too far from London. All the families from the class (there are 30) were invited to come along, and about half did.

The campsite is called Wowo, and it’s really geared towards families.

It’s also obviously geared towards Londoners making a show of getting back to nature for the weekend. 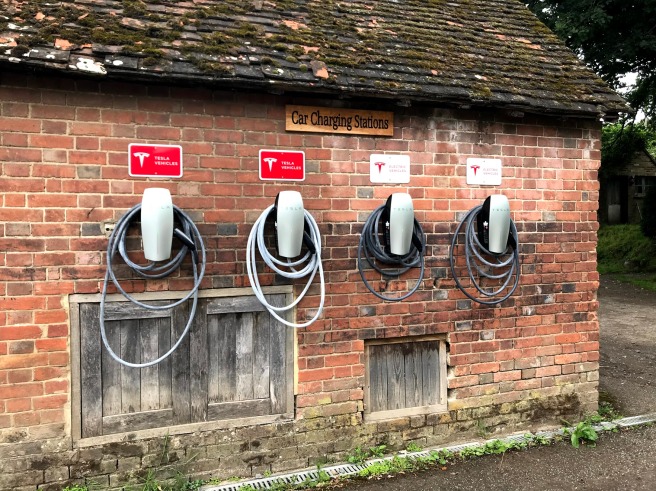 We rented a car for the weekend and headed out of town right after school got out on Friday afternoon, which happened to be E’s sixth birthday. She was extra-extra excited that she was going to be camping overnight with a whole bunch of her classmates on her birthday.

On Friday nights, the campground has a couple food trucks come in, which is a nice option as people are arriving and getting their tents set up.

Unfortunately, these were so popular that it took us an hour to get our pizzas, and shortly after we ordered they ran out entirely so everyone after us then had to wait in a very long queue for the fish and chips van. A few more food trucks would have been welcome.

The kids all enjoyed just running wild while we waited. 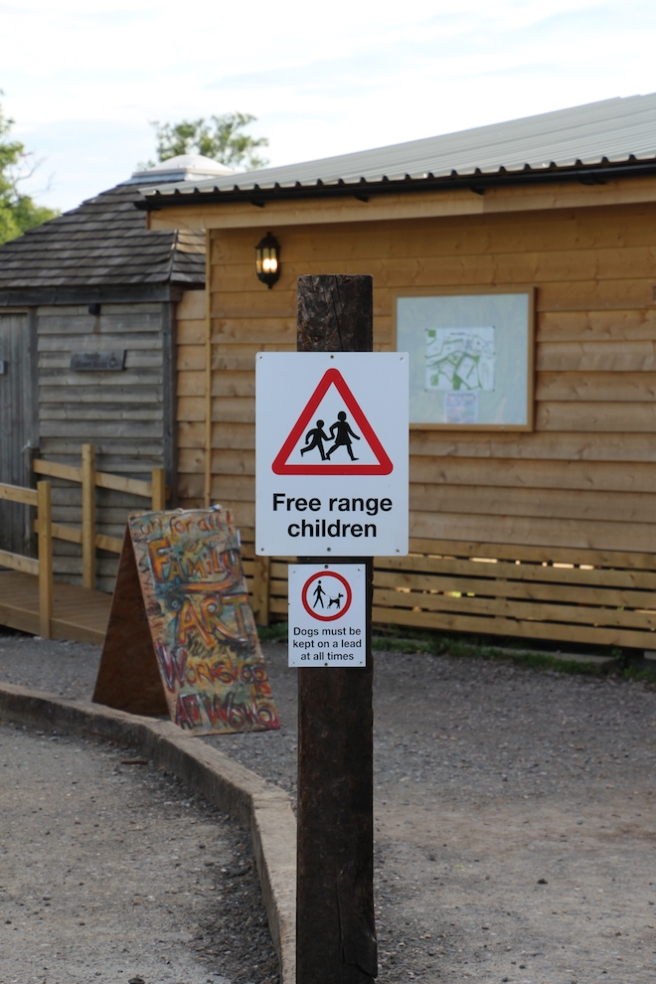 They were positively feral at times, which, I suppose, is the whole point of getting them out of London and into some wide open space.

After we finally got our pizzas, we joined the group by the fire at our class campsite. 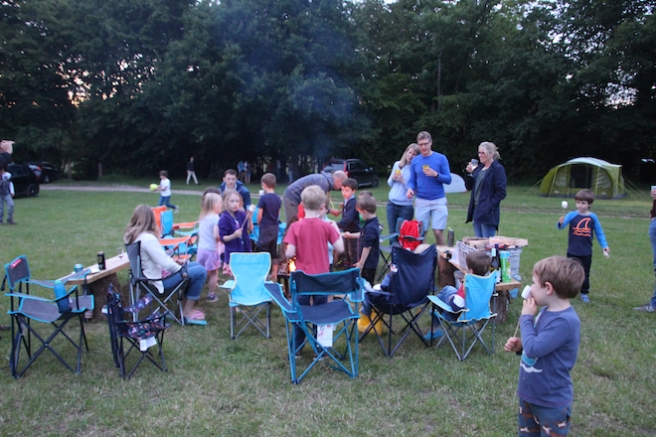 As it was E’s birthday, I put some extra special thought into a birthday cake for the occasion.

It was a big hit with everyone (I’m pretty proud of it).

As I mentioned before, we did not actually camp in a tent. The campsite offers a couple glamping options of yurts and ‘shepherd’s huts,’ and we ended up with one of the shepherd’s huts (which was more like a cabin-meets-trailer).

The big pros of this were having beds to sleep on (though our bed was much too short for M), a sink with running water and a stovetop, and a private bathroom, which was really just a compost toilet It didn’t smell the best, but at least we didn’t have to go outdoors in the middle of the night. We were a bit removed from the group who were tent camping, but that also meant it was much, much quieter for sleeping. I heard a lot of “Did you get any sleep?” questions among the mums on Saturday morning.

It took me a good long while to make our coffees by the cup, but we didn’t have anything in particular to do on Saturday, so that didn’t matter much. 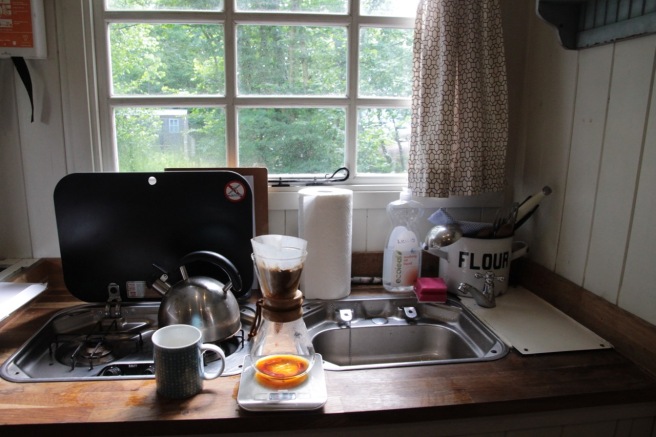 There was a very artistically talented girl doing face painting and henna for a few pounds that morning, so I took E to have that done. 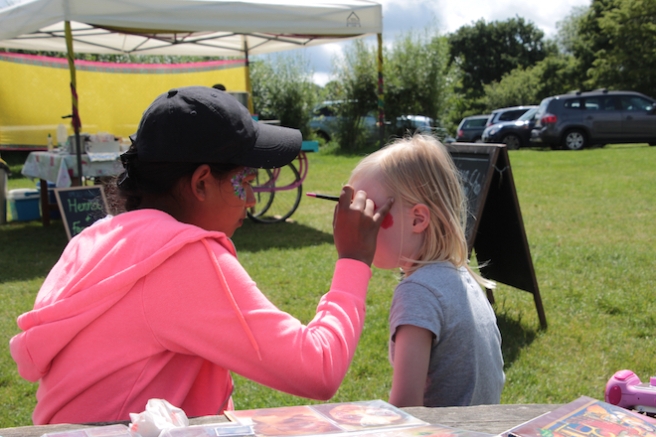 Some of the kids had been booked into various workshops and activities but we hadn’t booked anything for that day, so it was just free play for our girls all day long.

They got a bit muddy.

That afternoon, our group had planned to do a big BBQ together. There is a farm shop onsite, with various food items from local producers, so my friend Tomoko and I went together and got a bunch of food to do on the BBQ.

Unfortunately, as is bound to happen when you camp in England, it started to rain.

And then it started to rain really hard.

Some of the families headed over towards an area where they were doing free vegetable soup and bread (BYOBowl), and discovered there were some covered picnic tables over there. 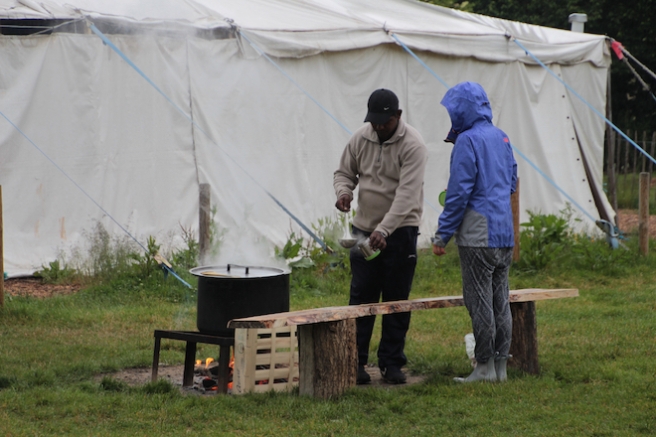 So most of us ended up taking cover there, clutching our hot soup in our cold hands. 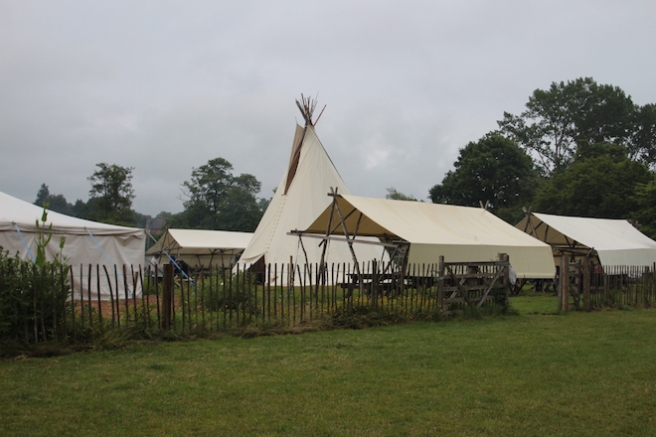 On Saturday nights they have music in the teepee, which turned out to be just the perfect thing to do while we waited out the rain.

Once the rain let up, and a rainbow stretched over the campsite, it was time to introduce our internationally diverse group to the American camping classic: s’mores. 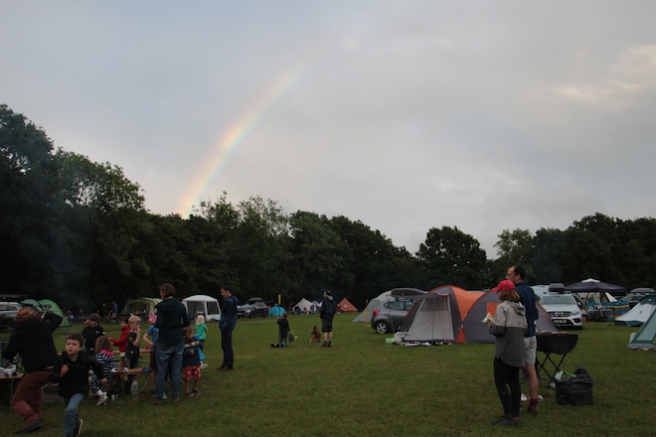 We couldn’t believe no one had tried them before! M’s mom had graciously imported the ingredients for us when his parents visited a couple weeks before.

Obviously, everyone loved them. I had at least two mums come tell me they thought they wouldn’t like them, but then discovered they were delicious. Um, duh. 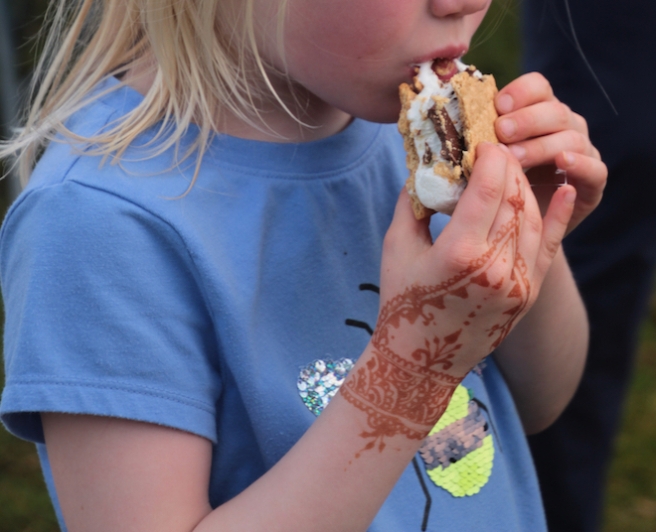 Sunday morning dawned rainy and soggy. A few of the families packed up right away and headed back to London for their warm showers and dry beds. We had booked activities for Sunday morning, however, so we weren’t quite ready to throw in the damp towel.

E went off on the ‘Fairy Preservation Society’ walk, and I went to yoga. Which was NOT under cover.

Normally, I love outdoor yoga in the summer. But when water is cascading down the mats, it makes for some particularly soggy down-doggies. I hung in there even as other people were calling it quits, but it wasn’t enjoyable, and finally the instructor just gave up. Next time, namastay in my yurt.

After our little fairy preservationist returned from the woods, magic wand and potion in hand, we could whisk our wellies into the car and head home.

We had hoped to return to the Griffin Inn for Sunday lunch that day, because it’s not far from Wowo, but it was definitely no day for a pub garden. So we returned to London, where the laundry cycles began.

And wouldn’t you know it, next summer’s weekend at Wowo is already being planned, and somehow M has managed to talk me into actually tent camping this time… though I may just have a little look-see at the Griffin Inn for room availability…