July was a particularly busy month this year. Between loads of end-of-school-year activities for both kids and people trying to get their summertime soirees in before everyone headed out of the city for the month of August, our family calendar was booked.

And there was one week in mid-July that must have broken some record in how many things I managed to squeeze into four days. Apparently I was trying to do as many British summertime activities as I could before spending a month doing American summertime things. Here’s a recap of the weekend we did All the Things: 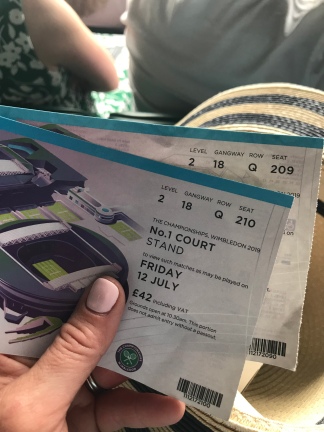 My dream come true. I have gone through the ballot process every year to try to get tickets to Wimbledon, and this year I was successful! Right after we had given up on ever getting tickets to the championships and instead purchased tickets to the No. 1 Court opening celebration in May.

And we got a good day and seats, too: Friday the 12th of July, the semi-finals. And No. 1 Court again!

And funny enough, we knew another couple (a French couple whose daughter is in E’s class) who also got tickets to the same court that day.

It’s really nice that they let you bring in your own food and alcohol to have a picnic there. So we didn’t have to spend a fortune on their particular brand of Champagne, or queue a long time for the bar, like we did back in May.

I made the chicken salad and dessert, and they brought what all good French people would bring:

We could see the people waiting in ‘The Queue,’ who had been there who knows how many hours in the hopes that they would have the chance to buy someone’s returned tickets in the Wimbledon ticket resale scheme, which raises money for charity. 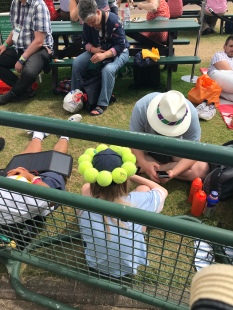 We got lucky to have such a beautiful day for it. After walking around and soaking up the atmosphere a bit, and a stop in the shop, we found a place just beyond Henman Hill/Murray’s Mound to picnic before play began on No. 1 Court. 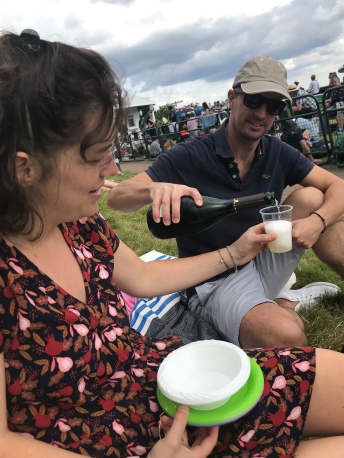 Our first match was ladies doubles, Dabrowski/Xu v. Krejcikova/Siniakova (Dabrowski and Xu took that one). 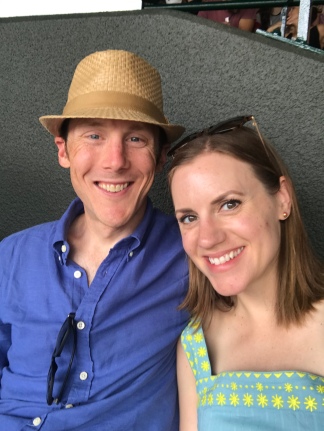 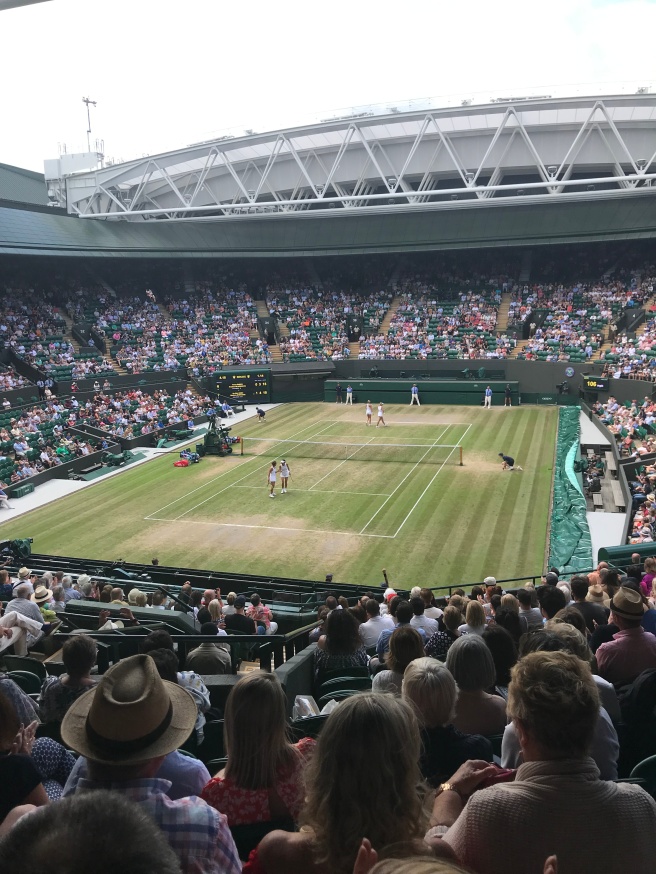 Then we headed to No. 2 Court, where they were showing the Centre Court match between Nadal and Federer live on the screens. 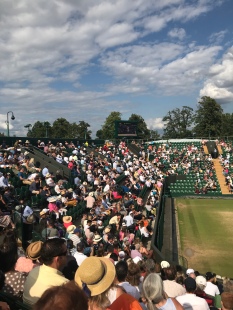 Of course I had to get the quintessential Wimbledon treat of strawberries and cream, but the queue for the stall selling them was bananas (yes, that’s a fruit pun).

But here’s a tip: they also sell them at many of the other food stalls, so you can buy them elsewhere with a shorter queue.

The screens in No. 2 Court weren’t that big, so we finished watching that very exciting match on the Hill/Mound, on the big screen, with an enthusiastic crowd. 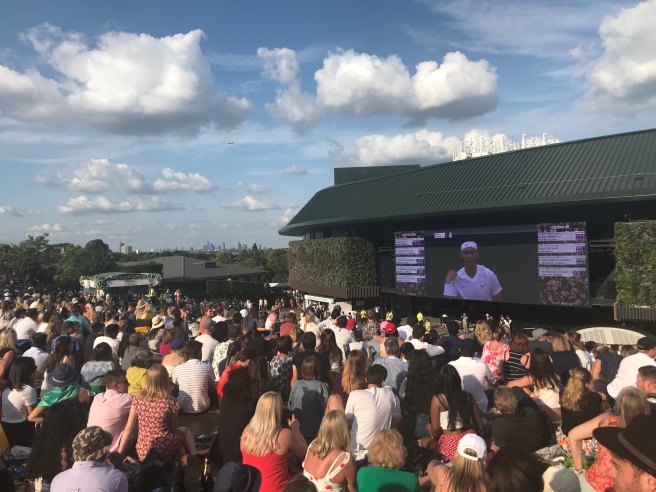 A few of the British celebrities there that day: Pippa Middleton, Hugh Grant, Jude Law, Leona Lewis, and the Davids—both Beckham and Attenborough. (Of course they all had Centre Court seats, so we didn’t see any of them.)

The British Summer Time (BST) music festival in Hyde Park is huge, but I didn’t realise quite how huge until we went for the first time this year to see Florence + the Machine. 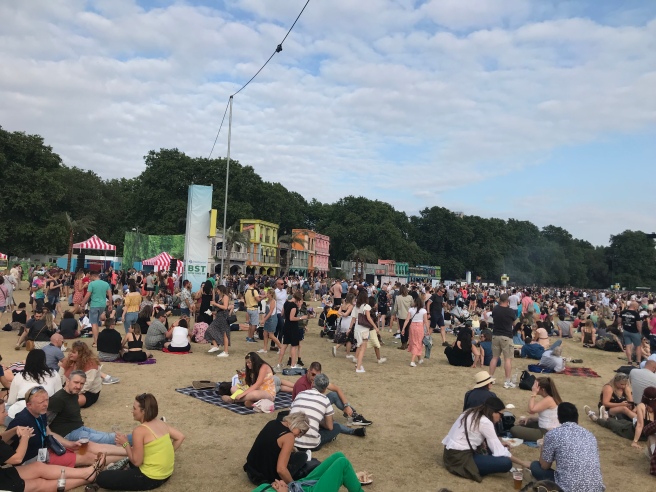 When I purchased tickets, I saw the concert would begin at 1:30 p.m., and I naively thought that meant it was an afternoon show, and we’d be home by dinnertime. Uh, no.

It was an all-day festival. So a bunch of bands I’m not cool enough to have heard of would be playing all afternoon and evening, and then Florence would go on as the headliner sometime around 9:30 or so.

While I love going to concerts of bands I like, I’m not really a music festival-going-type person. Being out in the sun (or rain and mud, as the case often is for Glastonbury) all day, drinking for 10 hours, pressing up against smelly and possibly high strangers, queuing for nasty port-a-loos… I’ll pass, thanks. I also haven’t worn face glitter since high school.

Fortunately, our babysitter could change the hours we’d asked her to come, and M and I decided just to go around dinnertime and hope we wouldn’t be a mile and a half from the stage at that point.

Our strategy ended up working out fine. The area of Hyde Park they block off for BST is massive, and they set up a ton of infrastructure for the series of concerts each summer. So there were plenty of places to get food and beverages. 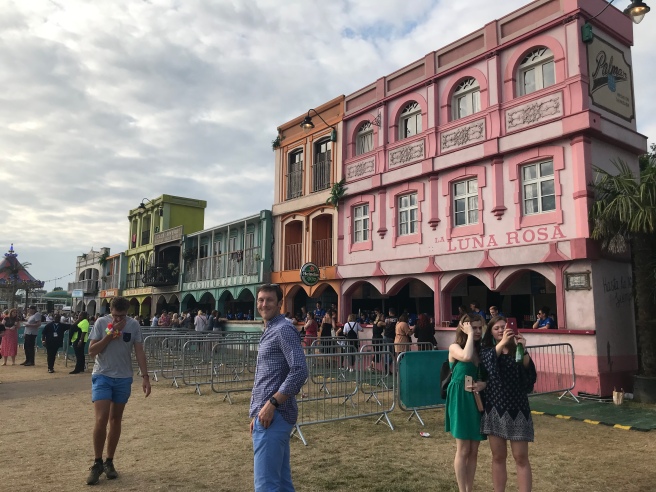 Now what we did have to walk a mile and a half for was to find craft beer. All the bars except one that was way in the back were boasting Heineken as their best option, but we decided it was worth the hike to the pop-up pub to get something good. (Come on, BST, it’s 2019—craft beer has been a thing now for quite some time.)

We made it back across the beeren wasteland in time to enjoy Florence, albeit from a ways away from the stage.

We had seen the band once before, years ago before we had kids, when they opened for U2 in Washington, D.C. They put on a great show, even from back here, in Latecomers Lane.

We also got to enjoy a magnificent sunset while we danced it out, IPAs in hand, so overall, we were glad we went. (And the toilet infrastructure was better than expected, too.) 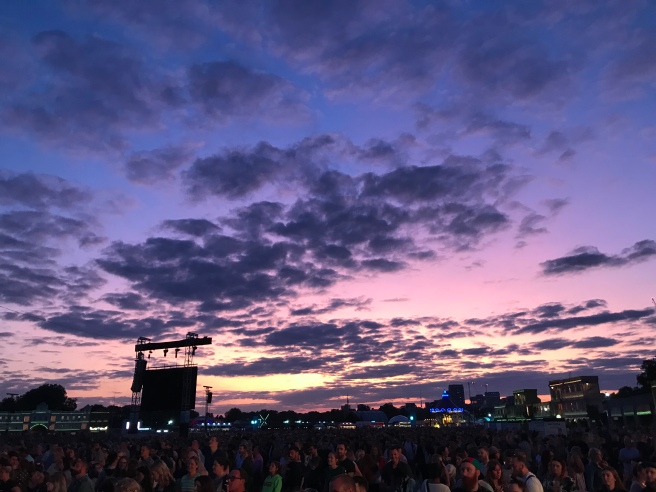 Our daughter kept calling the band “Florence Nightingale and the Machine,” which presents a very funny mental image if you think about it, of Victorian nurses up there rocking it out. 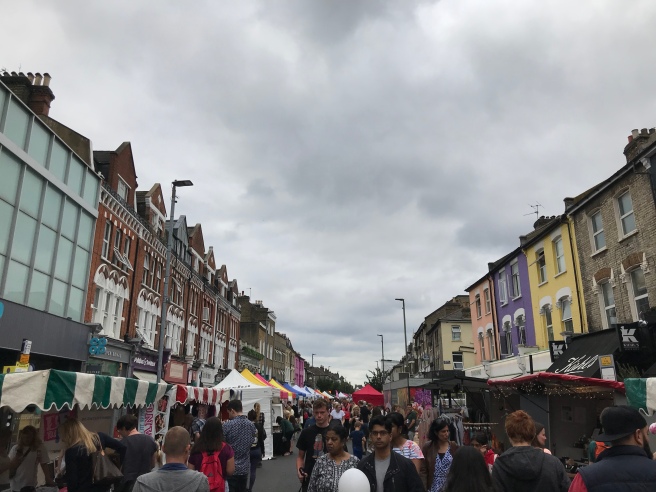 Our high street, Northcote Road, holds a summer street fair, usually on the day of the Wimbledon men’s finals.

The road closes to car traffic, stalls line the street, and there’s plenty of entertainment and fun atmosphere for the whole family. It always makes us lament that they don’t close the road to traffic every weekend. Or at least one day a month!

Stalls sell artisan crafts and gifts, food, and drinks (plenty of Pimm’s of course); there’s a children’s section with smallish fun-fair-type rides and games; and right in the middle of the road is a big screen showing the Wimbledon final (Federer v. Djokovic). 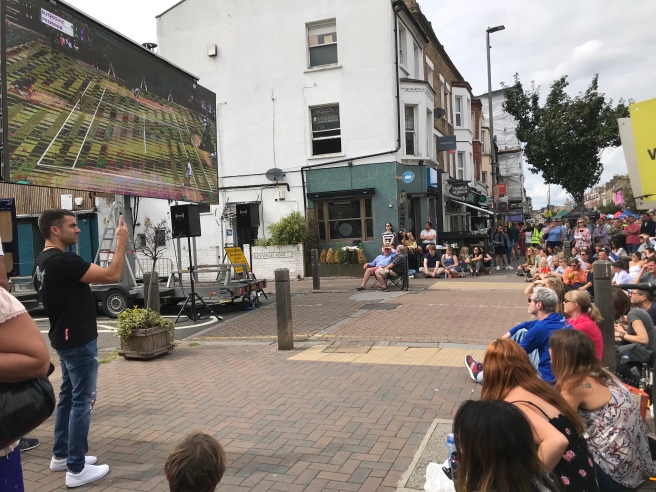 So we watched the final match of the championships with just a few of our neighbours.

And one of my favourite summer pastimes is outdoor theatre. It’s just not summer for me until I’ve seen some Shakespeare performed under the stars. Or rather, in London, under the continual airplanes that fly overhead, their droning noise making the audience strain to catch the Bard’s every witticism. (The stars may be up there, but you definitely can’t see them in London, especially in summer.)

When we lived in Baltimore, we always went to see the Chesapeake Shakespeare Company perform ‘in the ruins,’ which was fun but usually very hot and humid and mosquito-y, and possibly thunderstormy.

Here in London, I can actually get my open-air Shakespeare fix year round at Shakespeare’s Globe Theatre. And while summertime is generally a nicer time to be outside, I still take the more expensive option of purchasing a seat ticket, which is under cover. If you want to go for just £5, you can, but you’ll be standing for the entire show, and you’ll risk getting rained on. Plenty of people do take this option, as you can see! 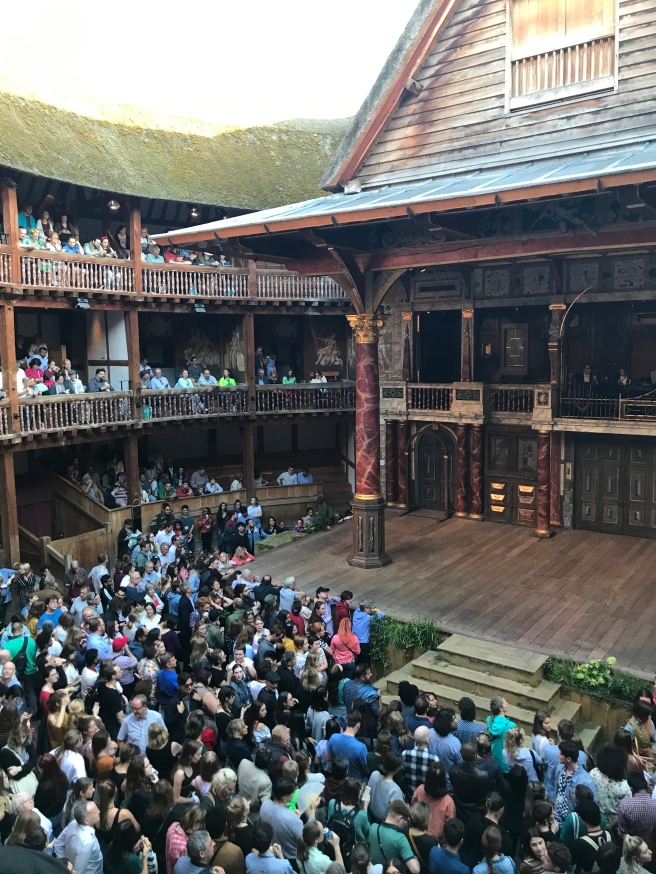 This time, I saw Merry Wives of Windsor, which was fabulous. No offense to the Chesapeake Shakespeare Company, but the actors and production value at the Globe are just some of the best quality you’re going to find around the, well, globe.

So that’s a wrap on the busiest weekend of the year. Just in time to be gearing up for Christmas season, when I always pack in lots of festive activities into a few weeks, because I am never sure if this will be our last Christmas in London. 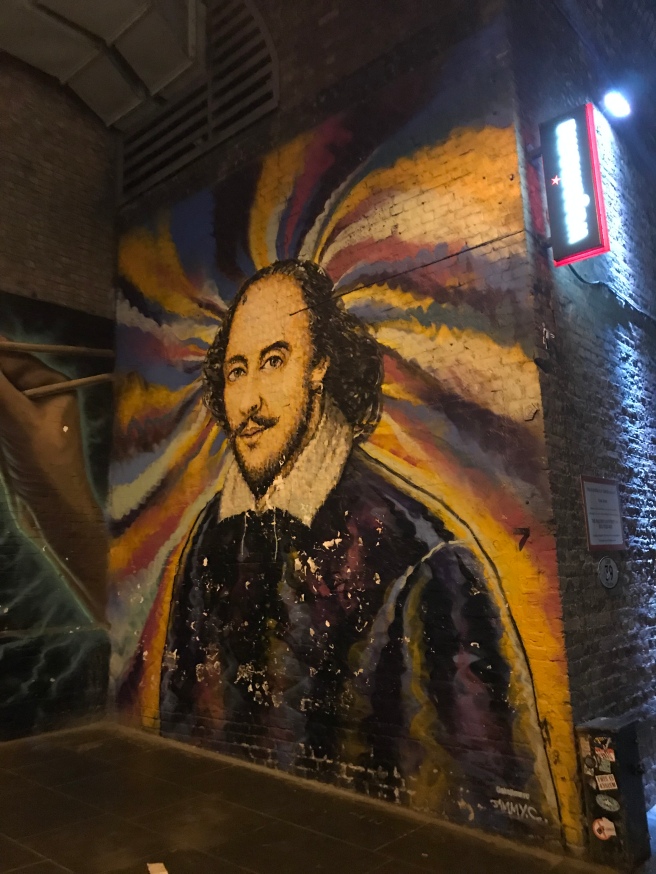 🐭 nicked again 😢 #wakehurstmousehole
[Zoolander voice] MerMOUSE! 🐭 🧜‍♀️ #wakehurstmousehole [undersea background credit to my 4yo and her generous sharing of her stickers]
A long-awaited grownups-only lunch @trinityoutside with @lauraaisling82 🥂
Coffee is calling ☕️
Follow Walks Between the Commons on WordPress.com
Loading Comments...
Comment
×
%d bloggers like this: