I got to check off something on my London bucket list this week, when M and I attended Secret Cinema.

Secret Cinema is an immersive, interactive cinematic experience in a secret location. You become part of the movie, dressed as part of the cast, with a role to play. I’m going to attempt to write about this without giving too much away, because I don’t want any agents coming after me for knowing too much and selling their secrets.

When you buy tickets, you know which movie it will be, and that it’s somewhere in London. About a week before our ticketed date, we received an email with a bit more information. After logging into our classified operation “mission briefing,” we took a quick quiz to determine which MI6 branch we should be in, and then we could choose a “cover” profession and alias.

We chose our aliases from drop-down lists of first and last names, giving everyone the same initials as James Bond. 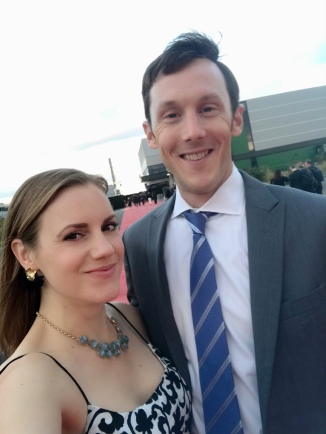 The other information we received at that point was dress code and location. Dress code was simple: dress to impress, we are mega-wealthy people going to the grand opening of the Casino Royale in Montenegro. Everyone is instructed to wear only black and white, with a pop of a particular colour that corresponds to which branch you are in.

We were assigned blue, so M wore a blue tie and I wore a blue stone necklace and blue-manicured nails. I briefly considered buying a blue wig from the party store, but I knew M would refuse to sit next to me on the tube if I was wearing that. The whole cosplay thing makes him super uncomfortable.

It was fun to see what other people wore. Many were much more glam than we were—men in tuxedos with a brightly coloured bow tie, and ladies in sequined gowns, dripping with (fake?) jewels, with their assigned-colour accessories: a fascinator, elbow-length gloves, or a fur stole or feather boa.

As for the secret location, we were given a meeting point of a tube station… that is in London, but barely. Let’s just say it’s not quite as far as Montenegro, but it’s certainly not close in. It took nearly an hour and a half to get there from where we live, and involved several train/tube connections.

Once we arrived at the tube station, there were “agents” guiding us to the “casino,” which is a short walk from there. The reason it’s so far out is they need a massive indoor space to create this immersive set, and there aren’t exactly a plethora of huge empty warehouses in central London.

They lock up your phone before you go inside, so that no one can take photos or videos and spoil the secrets, so out front at the entrance is where my photos from the evening end. 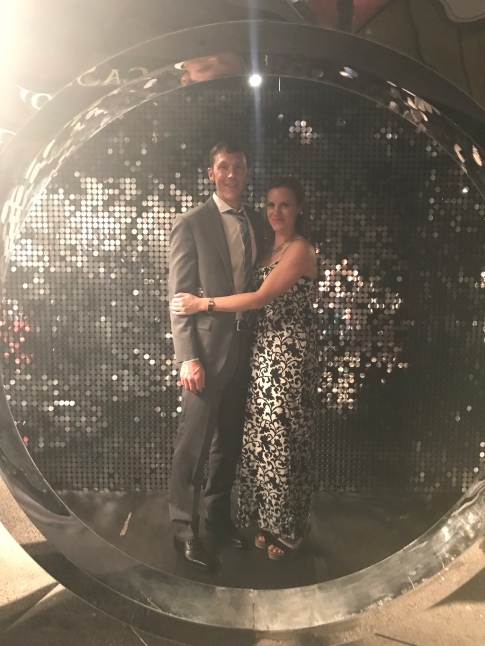 After a stop at the first bar for a glass of champagne, we were welcomed beyond the velvet ropes as the undercover multimillionaires we were, and given several thousand-dollar bills each to gamble with.

Then we were ushered into the first room. This is where I can’t say much about what happens, but it’s interactive and it’s exciting.

Once we were through the next door beyond that, we got a feel for the scope of the experience. It’s stunningly elaborate. You can walk through and mingle into multiple sets from the movie, and there is so much going on.

It’s a bit of a FOMO nightmare. There is so much happening in multiple places all the time, that it’s impossible to experience everything, or even get a handle on a storyline. On the other hand, you’re bound to see quite a few scenes play out no matter where you are.

I think you get out of it what you put into it. If you are willing to get into character, initiate conversations with strangers, and really go all in, I think you’ll get a lot more out of the experience. We pretty much just observed, and followed when we noticed some action happening. But you can participate a lot more than we did, and you’ll probably learn more “secrets” that way.

It was sometimes hard to tell who was an actor and who was just a ticket-holder like us, so it takes courage to approach someone and try to get some “information” out of them. (Though buying food and drinks was a pretty good giveaway that people weren’t actors.) Some people were even brave enough to join the high-stakes poker games.

After a while of wandering around the sets and watching various action-packed scenes play out, the finale is actually watching the movie. But it’s not like seeing it in just any cinema; the film is enhanced with corresponding special effects going on all around you, and actors dressed as the film’s characters acting out some of the scenes along with the movie. It’s the most immersive cinematic experience you can have outside of actually being an extra in a movie.

The scale of the whole operation is seriously impressive. I don’t know how many people work there, how many actors were among us, how long it took them to build these amazing sets and special effects, and how much time and money it took to create and run this.

And it’s temporary—it’s on for a matter of months, and then there will be another theme in another location. Next up is “Stranger Things,” which sounds like a pretty freaky world to be a part of. I don’t really fancy walking into the Upside Down, even if they are serving drinks in there.

If you go to a Secret Cinema event, a few tips:

They have plenty of lockers outside at the entrance, so I recommend wearing comfortable shoes for the journey there and bringing your heels in a bag and changing into them once you get there.

Keep your bank card on you to purchase drinks and food inside, but otherwise you won’t need to bring anything in with you. Again, they will lock up your phone.

We watched the first half hour or so of the movie a few nights before we went, so we could remind ourselves of the premise and characters, and we found that to be helpful.