On Wednesday night, I went inside London’s most exclusive members-only club.

I hadn’t heard of Annabel’s before, but apparently I’m in the minority. It’s a London institution, for decades a playground for the rich and famous. Oh, and supposedly it’s the only nightclub the queen has ever been to. NBD.

So how did I manage to get ushered in beyond the velvet rope? My posh friend Amelia recently became a member there, and organized a ladies’ night there for her birthday celebration.

When I expressed surprise at her becoming a member, Amelia said her daughter’s godfathers are divorced bachelors who go there all the time, and nominated her for membership. “I think they want more lady members,” she said. A year ago the club moved into a new location, and made all the members reapply and be vetted again, to purge some of the older, not-as-cool-anymore clientele.

This article on the FT has some good info on the recent changes.

When I told another friend I was going, she immediately piped up with a story from years ago when Jude Law was married to Sadie Frost, and how they had their child’s birthday party there, and the child crawled behind the bar and ate an ecstasy tablet off the floor and had to be rushed to the hospital. I haven’t even googled this to verify the authenticity of this story, because I rather think it’s beside the point. The point is, this is the kind of story that people tell about this place.

I took a look at the Annabel’s website, the background of which is a video of topless women dancing with snakes around their necks.

“What do I WEAR?” I texted Amelia in a panic. “My snakes are at the dry cleaners!”

But seriously, do I need a designer dress? She assured me that she’d be wearing a dress from a high street shop (that means chain/retail), so I would follow suit.

It takes a helluva lot of effort to go from full-time mommy by day to someone who could pass for a member of Annabel’s by night. Especially on a weeknight of a busy day, which involved biking the kids around to their various activities, tackling the week’s worth of laundry that magically manages to accumulate in a day, and more than one instance of cleaning up after someone else’s poo. Cinderella had it pretty easy with that fairy godmother doing her instant-transformation magic.

And when I climbed into the taxi to head to Annabel’s, the other passengers were sporting fur coats, Chanel bags, and Louboutin heels. So much for the high-street dress.

We went inside the club, with what felt like two dozen doormen greeting us, and Amelia showed her membership card. She gave us a quick tour of the place, which was both huge, and hugely ostentatious. 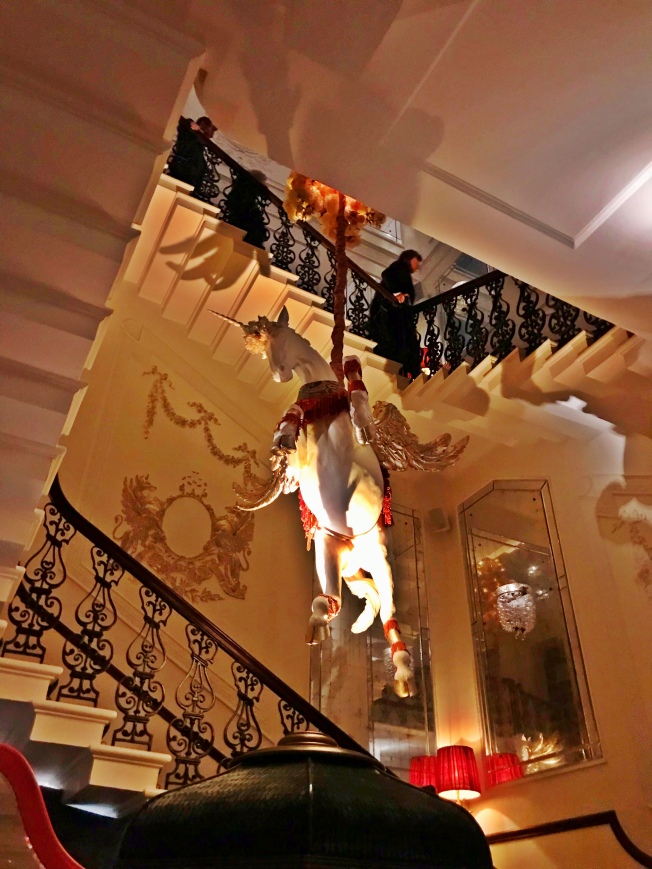 Every room is themed and decorated to the hilt. There’s an elephant bar, a jungle bar, a Mexican bar, and the Garden dining room, with a retractable glass ceiling they open in the summer. Because the wealthy elite should be able to dine al fresco without worrying about being approached by riffraff.

Even the lifts and loos are decked out extravagantly. This is one of the ladies’ loos, please note the ceiling and the faucets:

The club was buzzing despite being a Wednesday night. I was disappointed I didn’t recognize any celebrities, but there were a lot of people there and a lot of rooms, and way too much to look at. Many of the ladies there did look as though they could be models, and some were with much older men, and I don’t think they were their fathers.

Meanwhile, my friend Ruth told me during dinner that she had been a guest of a friend at another members-only club just the night before, and she saw both Matt Damon and David Tennant there. Apparently I was at the wrong club!

We had a glass of Champagne in the jungle bar, and then were sat at our table in the Garden-of-Eden-themed nightclub.

We had a set menu of Japanese food, mostly sushi, and they brought each course out to share. The food was… small. I guess when you’re serving models and actresses, that’s perfectly acceptable. The food and wine were incredibly expensive for what they were. A single glass of the house wine there costs £15. 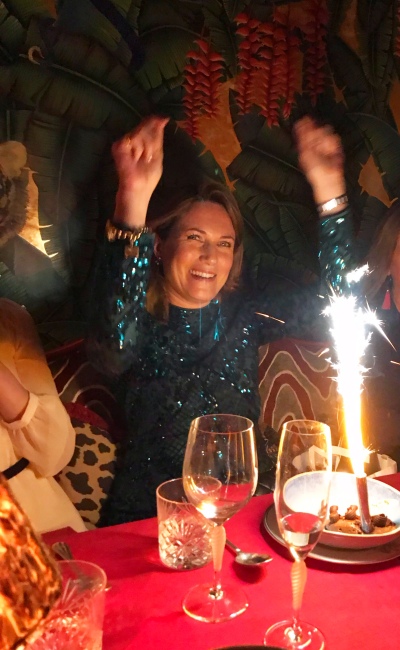 After dinner, close to 11 p.m., a band called The Cuban Brothers took the stage, and they were really entertaining. Their music was fun and upbeat, and their dancing and outfits were hilarious.

We all had a blast dancing for the next hour, and then when the band took a break and someone noticed it was midnight, we decided we should probably call it a night, before the black cabs turn into pumpkins and someone loses a Louboutin. 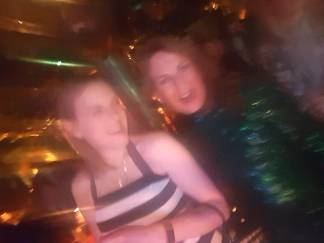 And much like Cinderella the morning after the ball, when I woke up I was back in my normal life again. The dog was barking with no respect for my hangover, I found a cartoon-character Band-Aid/plaster in my bed (“Oh, that was from my toe,” said E), and my 2-year-old greeted me by handing me a boogey, and then made me “guess the password” before she would allow me to change her nappy.

E asked me how the birthday party was, and I told her, “It was fun, but the food was really expensive.” “You had to PAY for FOOD?” she asked, incredulous. “At kids’ birthday parties they just bring it round.”

I didn’t mention the lack of party bags; I don’t want her to worry about birthday parties going downhill as she gets older.

I threw the Band-Aid in the bin, along with my torn nylons, wiped the raccoon eyes off my face, and went back to being Mom.

And you know what? I’m really very content with that. My normal life is pretty great the way it is. At Annabel’s I’m a nobody, but to my kids, I’m the star of the show.