Yes, last month M and I really went to two concerts in three nights—rock concerts, even, not classical music at Royal Albert Hall or something!—because a band he wanted to see and a band I wanted to see happened to be playing in London two nights apart. It’s like we’re teenagers again! Except that we don’t have the luxury of sleeping in the next morning. And also it turns out we’ve gone a bit snobby when it comes to the drink selection at a concert venue.

The first of the two concerts was CHVRCHES at Ally Pally—that’s the iconic Victorian venue Alexandra Palace, for those of you who don’t know the cool lingo that the London kids use (obviously I didn’t know that until recently).

It’s a major faff to get there from south London, and then from the nearest station you have to walk waaaayyyy up a hill, which is annoying when you’re trying to get there, but the panoramic view of the city from up there is pretty great.

CHVRCHES is a Scottish band that M has wanted to see for a while now, and I got more into their music as I listened to it a lot the week leading up to the show. 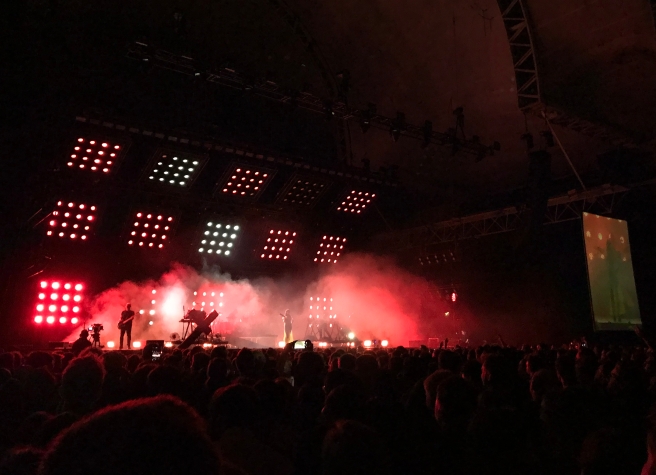 The lead singer, Lauren, has a great voice and stage presence, and M and I both really enjoyed the show.

The Ally Pally itself is standing-room only, and outside the main room there’s a room with food trucks set up, so we got a drink and some vegan soup before the concert started, which we consumed while sitting on the floor. It was all very glam.

The second concert we went to was my pick, Bastille.

I’ve been wanting to see them for several years, and they’re from London, so you’d think I would have had lots of opportunities. However, the first time I had the chance to see them perform here, in November 2016, their concert date was too close to my due date. And sure enough, they were performing in London at the very moment I was lying in a hospital bed across the city, listening to their music on my headphones, while laboring to push a baby out.

The next time I considered getting tickets to see Bastille, they were going to be performing with a symphony orchestra at the Royal Albert Hall, but it was the day I was getting back from a trip to the States, off a redeye flight. I actually did have tickets, but then decided to return them. There’s no way I could have stayed up for that.

And so. In February 2019, I finally made it to a show. Though I nearly didn’t, because right as we were about to walk out the door that night, after the babysitter had arrived, E fell chin-first on our wooden stairs, and four of her teeth went through her tongue.

(Hang on, there’s a soundtrack for this.)

We had to get the bleeding under control, and try to keep her calm, and meanwhile called 111, the NHS phone number for non-life-threatening health emergencies. They ended up sending out a paramedics team to our house to check her out.

It turned out that she hadn’t done quite enough damage for them to need to stitch anything back together, which is tricky to do on a tongue, and she would just need to let it heal on its own, which, fortunately, a tongue can do pretty quickly, because it’s a muscle. We had our most trusted and experienced babysitter that night, so we felt confident in leaving E once she was calm and on the mend.

Also fortunately, this concert venue, the O2 Academy Brixton, is not far from where we live; and we had built in a lot of extra time to have dinner out before the show; so even though we ended up leaving much later than planned, we didn’t miss the concert.

We even still managed to scarf down a fast dinner at Brixton Market, at Kricket, an Indian street food place we’d been wanting to try. (It was fabulous, and we’ve already made a booking to go back in April.)

The O2 Academy Brixton is a relatively small but famous venue, with a capacity of just under 5,000. There was a massive queue that wrapped all the way around the building to get inside. And what felt like just as long a queue for the ladies’ room. They have shockingly few toilets in this place, I have no idea why. (FYI, if you have your mobile phone service through O2, you get to skip the big line and go into a shorter queue to get in. M and I have EE, so we had to take the long road.)

The lower level is standing-room-only, and the upper level is seated, but you aren’t allowed to stand up there, I guess because it’s so steep? I did a lot of dorky-looking seated-in-my-chair dancing. It’s all general admission seating, too, but somehow we got really lucky and got the last two seats together in the front row of the seated level. I think two people must have gotten up and moved right before we walked in, that is the only way to explain that luck.

The opening act was Lewis Capaldi, who sang like a beautiful angel from heaven, and then sounded like a sailor from Scotland whenever he talked between songs. “If you like fat f-ing guys singing sad f-ing songs then you’re in for a f-ing treat,” he announced. Such a charmer! But seriously, go download his music, it’s lovely. 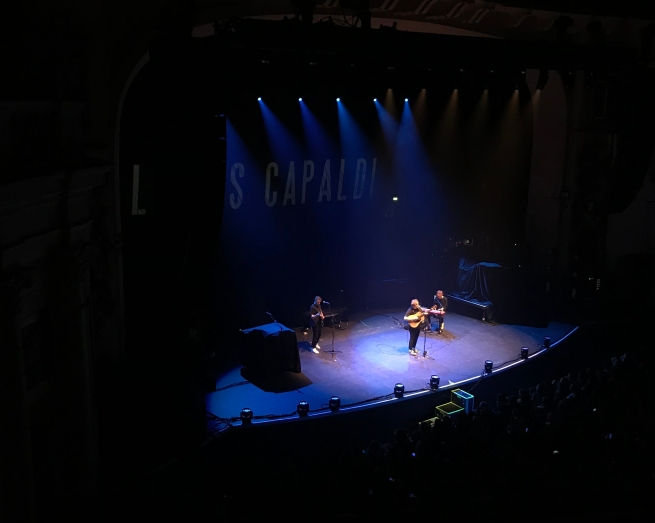 In between bands, I sat reading a New Yorker article on my phone, which I realized placed me into a very different demographic than many of the other concert-goers.

Bastille didn’t let me down, after all the years I’d waited to see them live. The lead singer sounds exactly like he does on his recordings on stage, and they put on a fabulous show, with a few special guests popping out for some songs.

Despite the horrifically bad drink options, and the queue for loo, we have already booked tickets to another show there. Weezer is playing there on my birthday in June, and the last time I saw them was when I was 18 years old, which means half a lifetime ago, which means I’m super old, but Weezer is even older and still making music, so good for all of us!