At the beginning of the summer, my parents were visiting and once again graciously stayed with our girls here in London so M and I could have a little getaway. We spent four nights in Barcelona, were we appreciated the sights, the weather, the artistic genius of Pablo Picasso and Antoni Gaudí, and of course the food and drink.

We flew out of London on Thursday night, on a very rowdy budget airline flight with a stag (bachelor) party and a boys’ football club (probably ages 8-10?) whose parents let them run wild.

Fortunately, the man next to us on the plane was a nice Barcelona local and helpfully gave us a bunch of restaurant recommendations. (And as always happens with us on international trips, we ran into him again later that weekend, on a random street. Does this happen to anyone else? Is there a term for this phenomenon?)

Once we escaped the chaos of the party plane and arrived in Barcelona, we checked into the Hotel Murmuri, recommended by M’s parents, in L’Eixample neighborhood (means “the expansion” and is pronounced “ay-SHAM-plah”). We were relieved to see the clientele did not appear to include stag or hen parties, or a boys’ football team. (As we saw throughout the weekend, Barcelona is a huge hen party destination.)

We walked around the neighborhood and found a cute little vermouth bar, where we had a drink while deciding where to go for dinner. 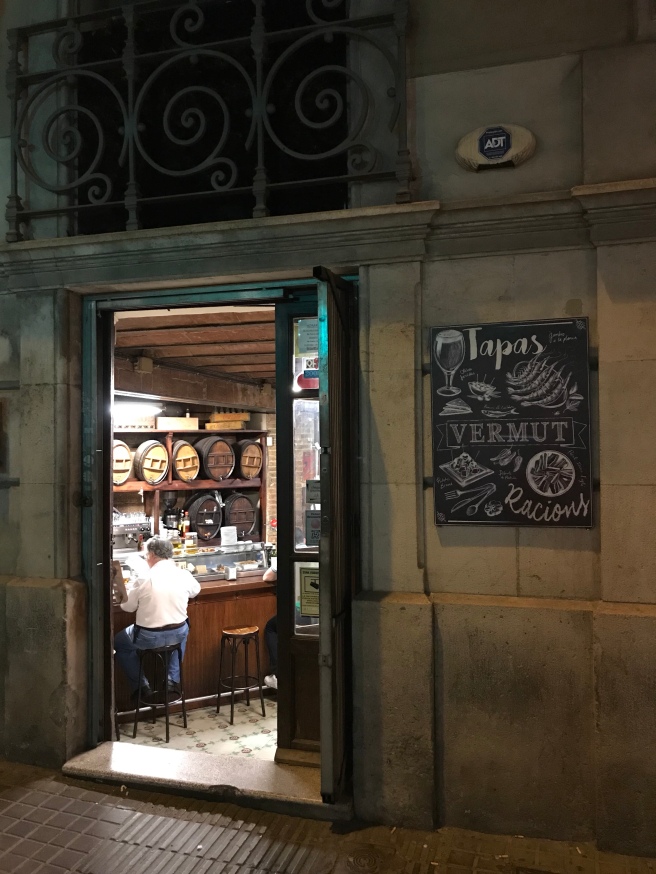 We decided to try one of the recommendations from the guy on the plane, called Sopa Boba. Really delicious tapas (I even ordered a second plate of patatas bravas), and a bottle of house wine cost just €10.

On Friday, we went for breakfast at one of the many sidewalk cafés near our hotel. Sidewalk cafes like this are the best and worst of Europe all in one. I love sitting outside, the people-watching, the cute café chairs, the pastries… but (by American standards), there’s also incredibly slow service, the coffees and waters are tiny (if they even remember to bring you the water you asked for, which is a big if), people are chain smoking all around you, and beggars come right up to your table. It can be a very pleasant experience or a very frustrating one, you never know when you roll up and sit down. It’s not a great idea to choose this dining option if you’re in a hurry and want to eat and pay quickly and get on your way.

So we made a bad choice that morning, as we had booked timed-entry tickets to the Picasso Museum, and breakfast (very simple typical Spanish breakfast of coffee, bread, and egg-and-potato tortilla) took ages. Fortunately, we still got right in at the museum, despite being really late for our timed ticket.

There was a sign up saying the museum was on strike, and a man talking into a megaphone, but the museum was still open and people were working there, so I’m not really clear on what was happening.

The museum has mainly Picasso’s early work, rather than his most well-known art, his revolutionary cubist work, that’s spread out among museums around the world. There was also a new exhibition that had just opened called Picasso’s Kitchen, which was basically a collection of his art that had anything to do with food or cooking.

I definitely had a new appreciation for the talent of Picasso after seeing the broad range of mediums he worked in and getting an idea of how prolific he was from such a young age.

After touring the museum, we explored the El Born neighborhood. We followed the El Born walk in our Rick Steves pocket guidebook. We stopped at a produce market for cones of jamon and manchego, a baguette, and slices of watermelon. I don’t normally eat pig, but I make an exception in Spain for the jamon Iberico. 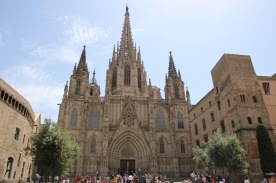 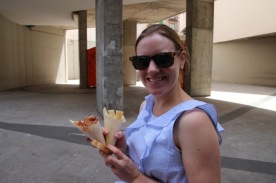 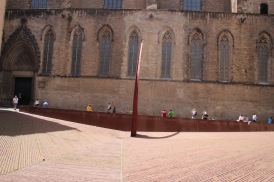 That evening we had booked a food tour with Eat Local Barcelona. They ended up “upgrading” us to the Wine and Tapas tour (I think because we were the only ones that booked the other tour for that night).

Our lovely guide Andrea took us and one other couple to three different stops in the El Born neighborhood: a traditional bodega, a modern wine bar, and a restaurant. Interestingly, she said her generation (she’s probably in her late 20s, we guessed) drinks mostly beer, not wine. But vermouth seems to be the aperitif enjoyed in Barcelona by all ages.

The bodega we started at has been there since 1952, and is run by the grandson of the original owner. Andrea said you can’t open a real bodega anymore, you have to get licensed as a restaurant or a bar, not a bodega, so all the authentic ones still around are old. They serve only cold tapas because they don’t have a license to cook, but want to have snacks available for people who are there for drinks.

We tried vermouth, an aperitif made locally (there wasn’t even a label on the bottle), and two cavas (Catalonian sparkling wine): one newer and one gran reserva, meaning it was aged for 15-30 months.

At the second stop, a wine bar, we tried two white wines: 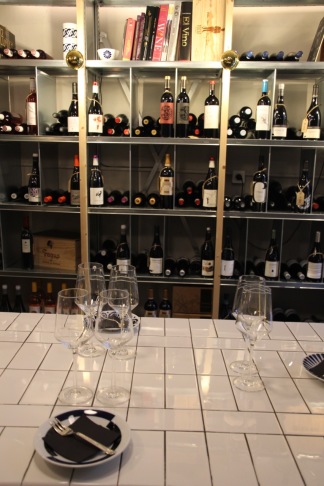 And at the third stop, a restaurant called Ziryab, we tried two red wines and a digestif, but we can’t remember the name of it, probably because we’d had quite a bit to drink by that point, ha. There was also food at each stop, including a main at the third stop, so we weren’t smashed. I mean, not completely.

Some more photos snapped along our tour: 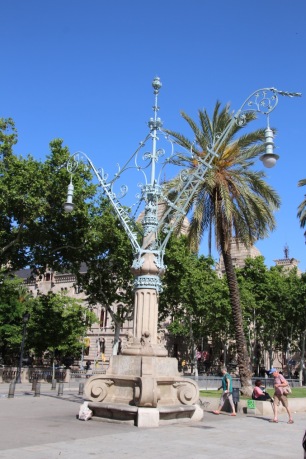 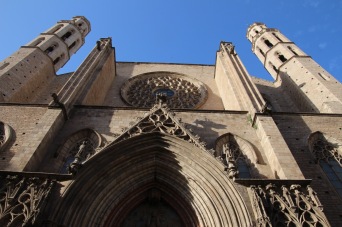 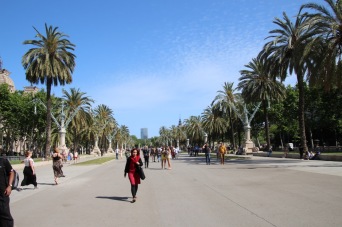 After our tour ended, we tried to go to a hotel rooftop bar that the man from the plane recommended, but when we got there we were told it was closed for a private event that night. The doorman helpfully told us there was another nearby hotel with a rooftop bar, which we then had to stop and ask a couple more times to find the right place, but eventually we ended up here, at Ohla Barcelona.

We relaxed on the rooftop in front of the pool and watched the sky darken and buildings brighten as day turned to night. 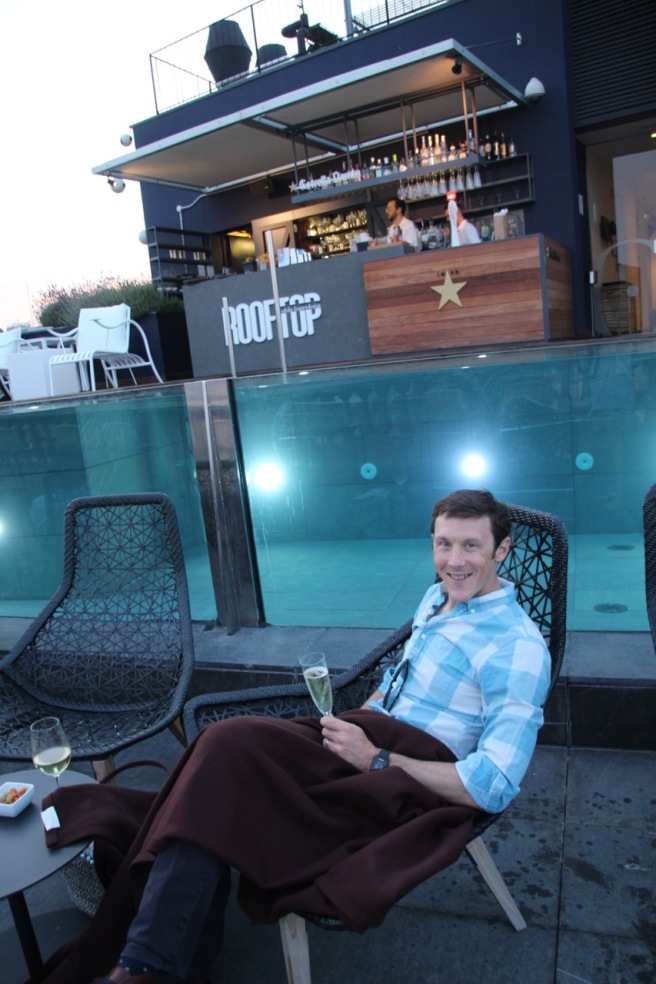 Our food tour guide had given us a brochure from their tour company with Barcelona restaurant recommendations, so on Saturday morning we chose one of the recommended brunch spots, Oma Bistro, and headed there. A good rule of thumb we’ve found in multiple countries is that if there’s a bicycle on display inside, they will probably have avocado toast and good coffee, your standard global hipster fare. This applied here.

On our walk from breakfast toward Plaça de Catalunya, we walked through a dodgy area with a fetish club and a completely nude woman doing some sort of naked gymnastics on the hood of a car (it was 11:15 a.m.), which was… interesting.

Once we got back to the mainstream-tourist track, we combined the start of Rick Steves’ Las Ramblas Walk with his Barri Gotic walk. Along with lots of other American tourists, some brandishing the same book. I hate that holding a Rick Steves book announces to everyone that I’m American, but we do really like his city walks, so, there you have it. Some photos from our ramble: 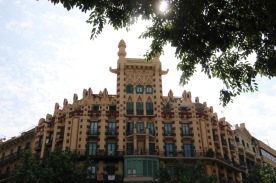 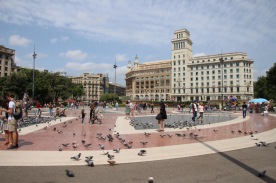 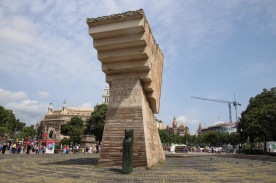 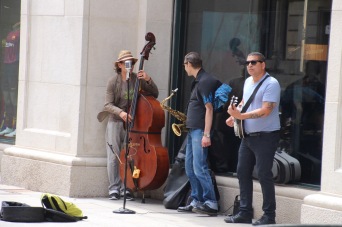 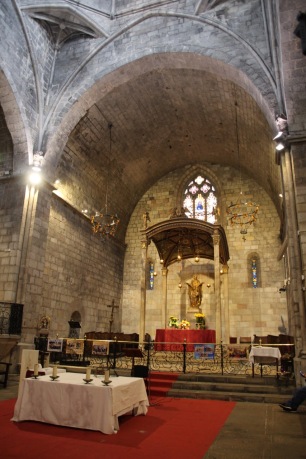 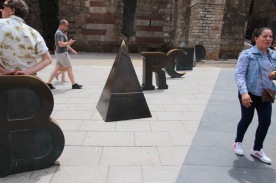 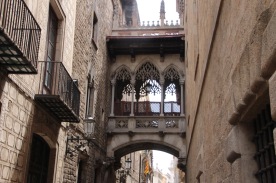 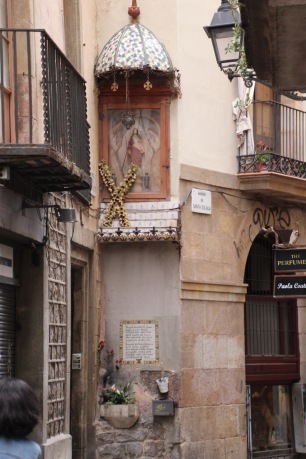 We did veer off the American-tourist track for a couple recommendations from our Lonely Planet guidebook, like a weekend arts and crafts market and a churros con chocolate shop. And to shop for some espadrilles! 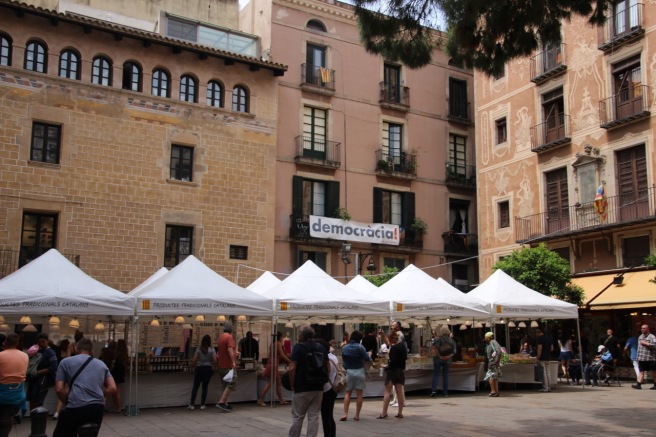 That afternoon, we took some advice from one of my London friends and caught a train out of the city to Freixenet, a big winery where they make the Spanish version of Champagne, called Cava. 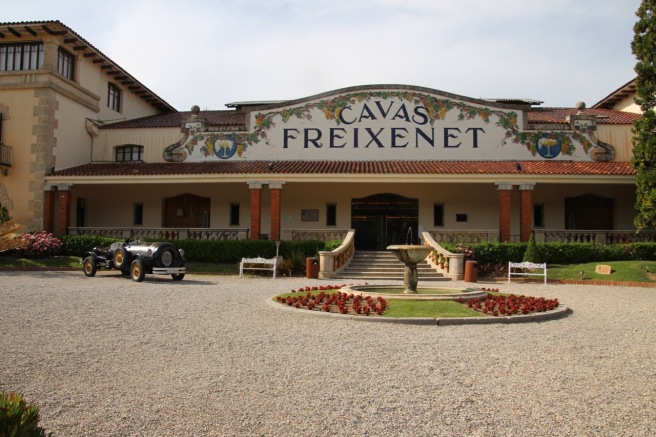 The train ride took about an hour and wasn’t particularly picturesque, which was a bit disappointing, but we enjoyed our tour and tastings once we were there. 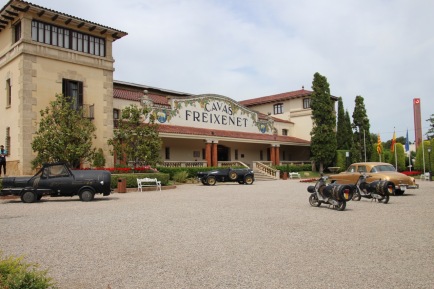 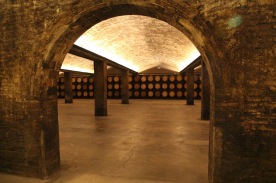 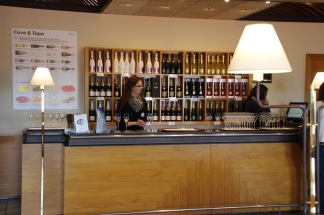 That night we went for a dinner of paella at a seafood restaurant, where we were the first people there when it opened at 8 p.m. We were actually seated before the old people there for the early-bird special and the family with children, who came at 9. Spanish dinner time is just one thing I can’t get used to.

After dinner that night came one of my favourite moments of the trip, which was another recommendation from my friend: taking the lift up to the top floor of the Hotel Ayre Rosello and turning the corner to be met with this view: 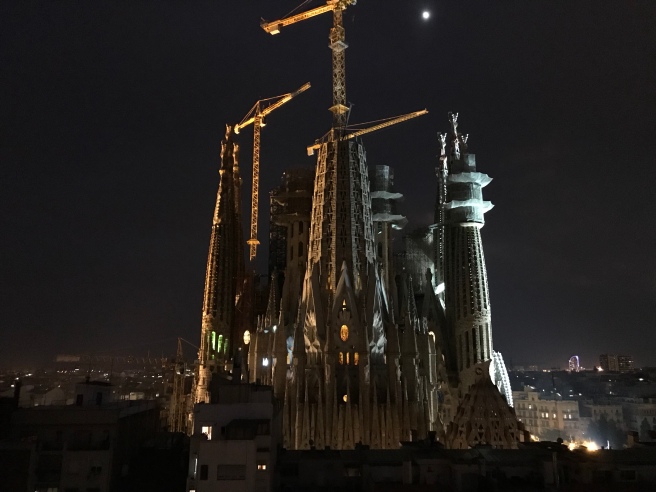 The hotel’s rooftop bar is sat smack in front of the Sagrada Familia, and it was a stunning sight, which we enjoyed with an after-dinner nightcap. 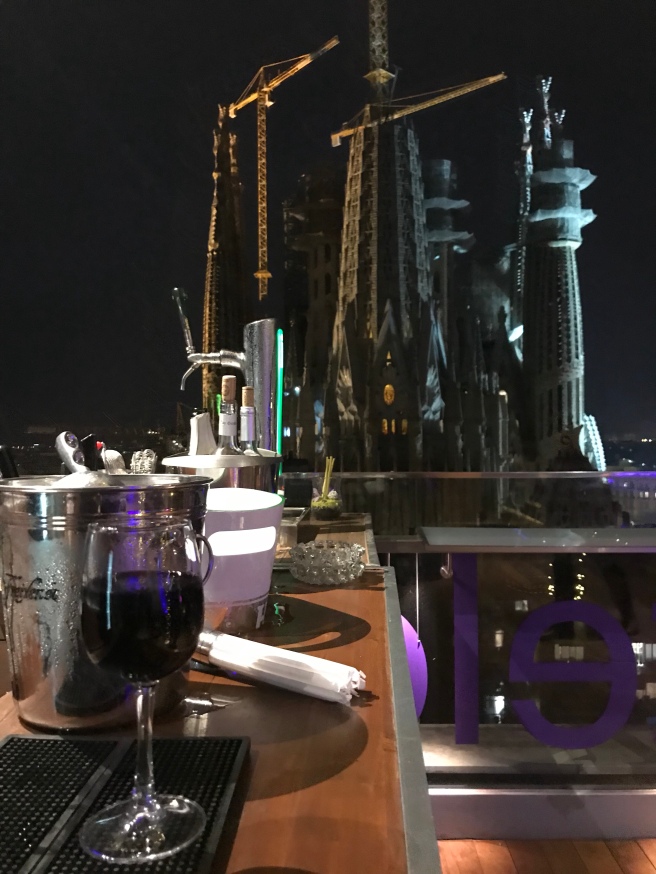 Read on for the rest of our trip: Barcelona, Part 2.