When we moved to London, I was six months pregnant, and in major nesting mode. The baby’s room in our new house was already painted a light blue, and even though I knew I was having a girl, I decided to go with it. I was so excited to be giving birth in the fabulous city of London, that I chose to go full London theme-ahead for the baby’s room.

London’s look is so iconic with its red buses, phone booths, and post boxes; black cabs; and famous buildings. I also worked in everyone’s favourite London bear, Paddington, who fit right into the colour scheme, which I took from the Union Jack.

(The crib/cot, dresser, and glider are all from a nursery furniture store in Maryland, which we bought when furnishing E’s nursery in Baltimore. Bookcase is from Ikea.)

‘My Roots Lie Here’ world map from Children Inspire Design
With hearts over Baltimore, Maryland, where we moved from, and over London, where R was born. Big sister E has a pink USA version of this map in her room, with hearts over Oregon and Virginia, where her parents are from (and grandparents live).

R is for rhino print from Dandylion Dandylion on Etsy

{UPDATE: I contacted the very lovely lady from Dandylion Dandylion, Jo Garden, about doing a custom “R is for Rainbow” print for me, and she did, and it’s now replaced the rhino print.} 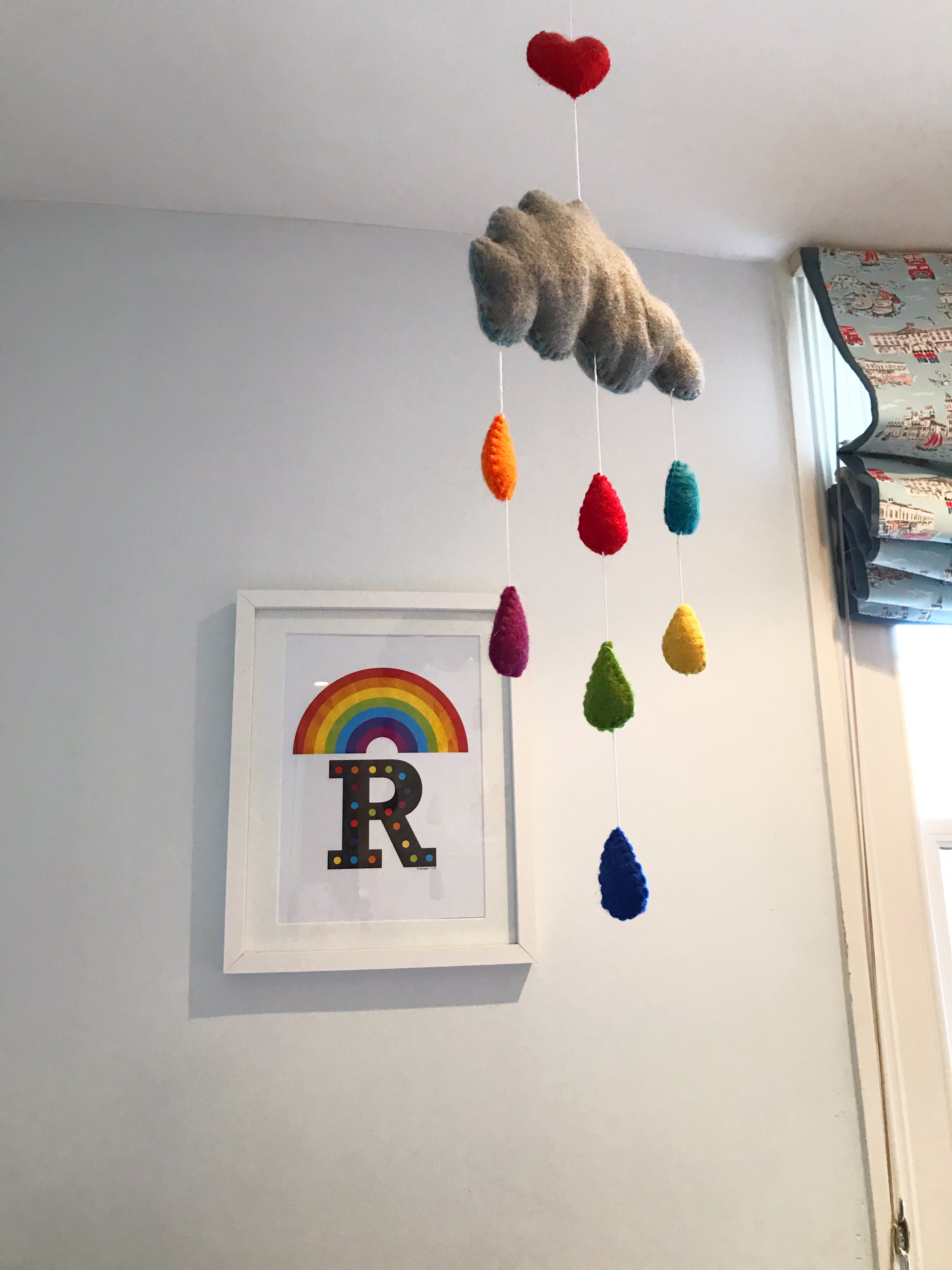 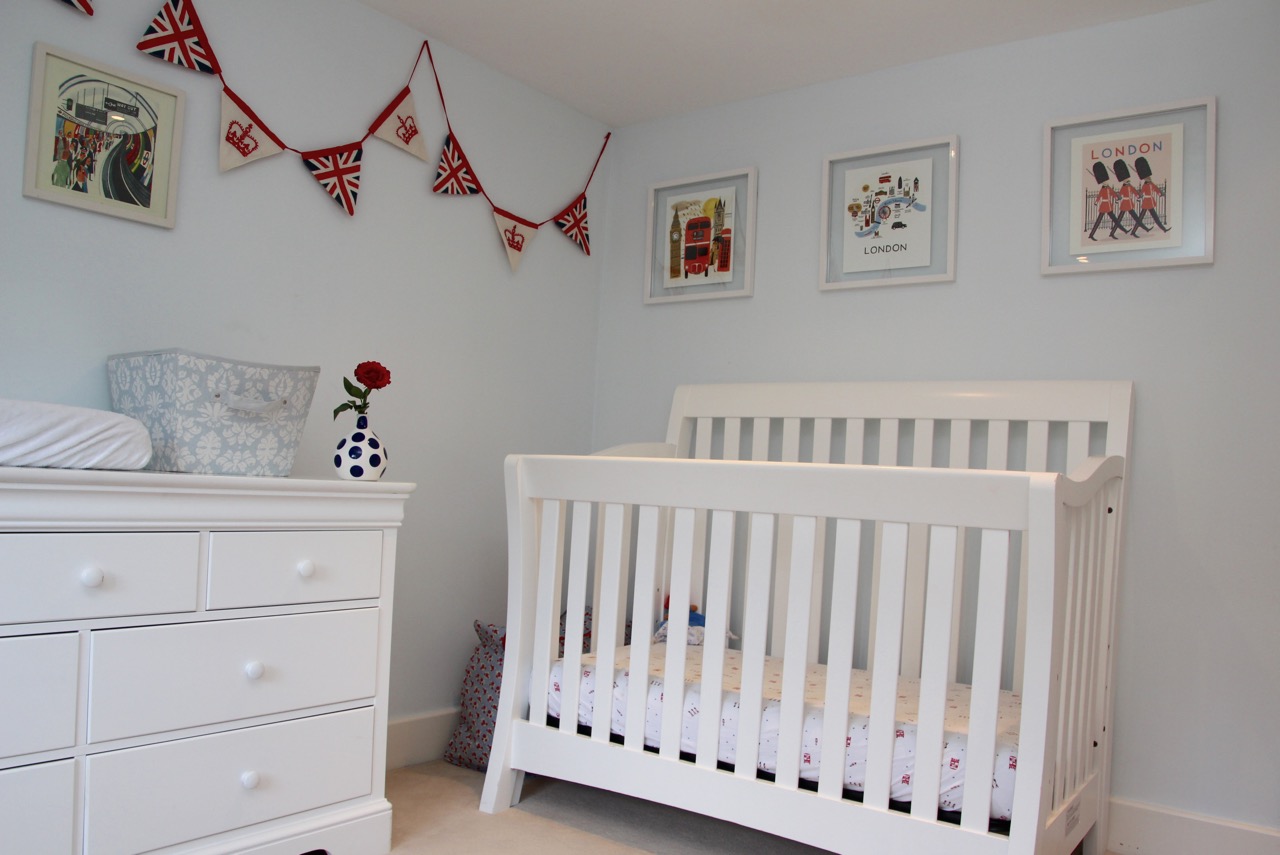 (Shown on top of bookcase) R is for [name] personalised canvas: digital download from Petrichor Blue on Etsy, then I ordered a canvas from an online photo-printing service.

Of course I needed a little nod to the English liquid sunshine. The felt rain cloud mobile is from a small shop in Staunton, Virginia, where my in-laws live. Similarly adorable rain cloud mobiles available here, here, and here.

I purchased the Union Jack bunting at a shop in Bath. Similar here.

London red bus pillow (in front of blue box on bookcase) is from a stall at Portobello Road Market.

London pillow (on glider) from Cath Kidston (no longer available)

London curtain made from Cath Kidston fabric (by my skilled MIL)

Once you’ve moved up to a toddler bed or a big-kid bed, this London bedding from Next is really sweet:

London wooden bus and taxi toys from The Little White Company (I got lucky and found these used, for only £15 for both, at a local children’s charity shop). 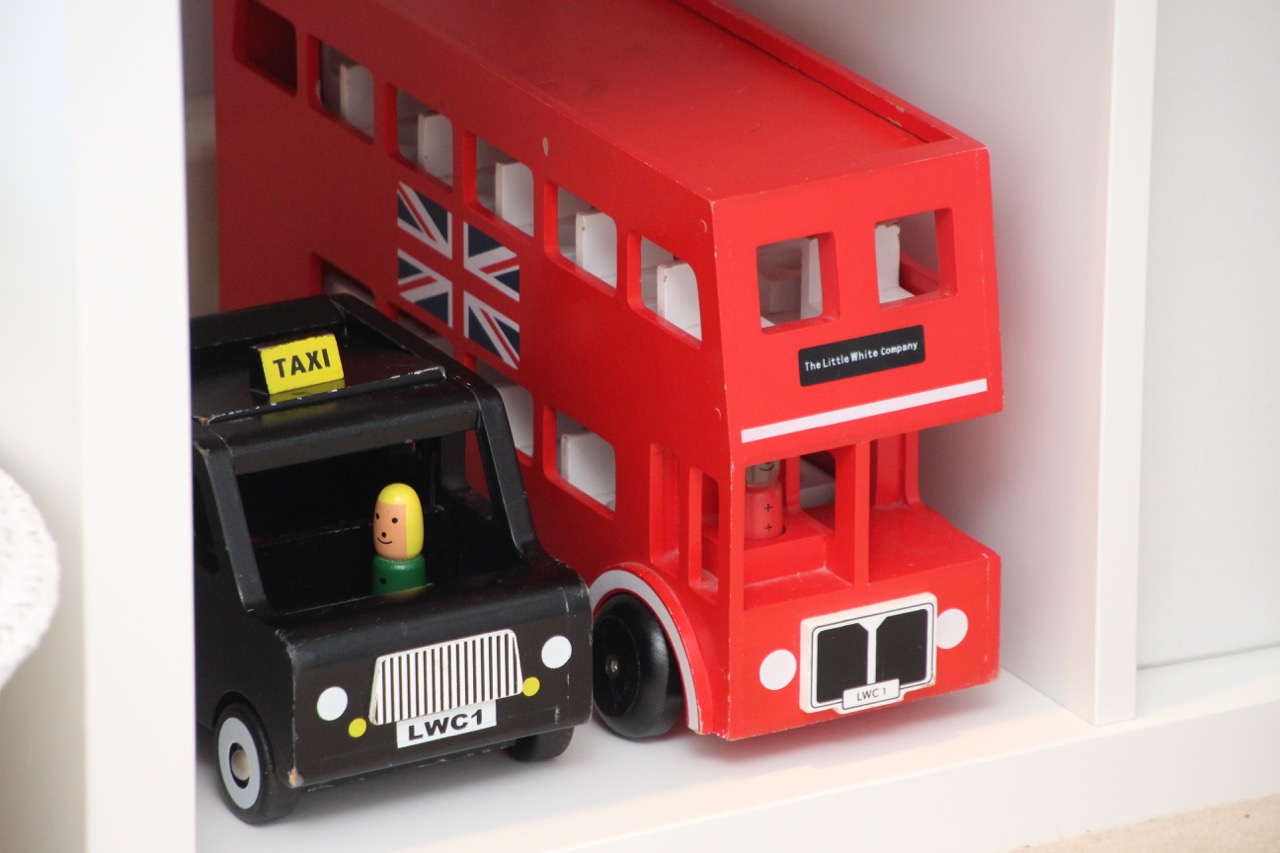 London wooden blocks set (not pictured here, but we have it, and it’s cute)

London books—we have loads. Of course, there is so much classic children’s literature set with a London backdrop: Peter Pan, Mary Poppins, Harry Potter… A few of our favourite London books for babies and young children: