We’ve had a proper summer here in London, and E’s school isn’t even out for summer holidays yet. In May, we had those first days of glorious, perfect weather that makes everyone in London go outside and act giddy. I walked down the road on those days thinking how grateful I am for the opportunity to live in London, and how proud I am of us for being brave enough to take the opportunity, and how much I really freaking love living in London.

Now we are at the end (I hope) of a record-setting heat wave. It’s been hot with not a drop of rain for weeks. Not as hot and humid as Baltimore gets in the summer, but there’s not much air-conditioning over here, so it’s hard to find relief.

Our house is hot. I haven’t wanted to go anywhere by public transit because the tube stations are boiling and the buses are sweltering and everyone is sweaty and stinky and crammed together. (Air-conditioned London buses are like aliens. Some people claim they’re out there and they’ve had close encounters, but I’ll believe it when I experience it myself.)

Clapham Common has turned into Clapham Beach; there’s no water to swim in, but it’s got people in bikinis lying all over it pretty much all the time now. And it’s gone completely brown with the lack of rain this summer, so it might as well be sand. If I could figure out how to set up a giant slip’n’slide on the common, I could charge people a pound a slide and make a fortune. Direct message me if you want to crowdfund this venture.

The city stinks a little. The air quality is poor here to begin with, made worse by the heat, and the smell of urine (mostly canine, most likely not all) on hot pavement and people’s rubbish bins baking in the sun is not pleasant.

We got a note from a neighbour across the road about our dog barking too much, because everyone’s windows are open all the time and you can hear everything and everyone’s business.

But you know what? Despite all that, I still freaking love living in London. (But I could have killed for a simple ceiling fan in our bedroom this past month, I’ll be honest.)

It’s hard to believe it’s been two full years since I left my job and was packing up our life in Baltimore for this move to London. I was pregnant and E was just turning 3 and potty training. M was already spending half his time in London. It was a two-year contract with his company. Which is now up.

But we aren’t quite ready to move back just yet, so we’ve signed a 12-month extension. Mostly I’m just relieved I don’t have to go through the myriad hassles of moving again so soon!

We’re not exactly studying for our British citizenship test, but this lifestyle is really working for us right now, at this phase in our life. We’re happy here. I remember writing a mass email to friends and family from Bath at the end of 2002 with the same gist: I’m having too much fun here in England, and I’m extending my stay.

London, and particularly this area we are in, known as “Nappy Valley,” is such a fantastic place to be doing the stay-at-home-mum thing while the kids are young. I have never felt so physically exhausted at the end of each and every day, but in the best possible way.

I love walking E to and from school, which is only a minute away. I love listening to her English accent, which she dials up to a 10 when she’s talking to her friends and anyone else who isn’t American. She uses British words and terms for things pretty much exclusively now. Last week we actually had this exchange: “Ooh chocolate cream biscuits, I love those!” Me: “They’re called Oreo cookies and they’re American.” I mean, really.

She has grown so much in confidence this past year, in her “reception” year at primary school. It’s strange to think that when we move back next summer she will have spent exactly half her life in London. (She recently learned the song, “Happy birthday to you, stick your head in the loo, I know it’s disgusting, but it’s healthy for you!” So I guess she’s truly an English schoolgirl now.)

I love bicycling R to her various play groups and activities and little pre-nursery program. I love that I can have a perfectly normal weekday of taking care of my kids and household and then—boom—by 7:30 be sitting in a theatre watching Laura Linney in a one-woman play.

There are trade-offs, of course. The air quality, for one. M and I have a chest/throat tickle that never really goes away, and that worries me, especially for the girls’ developing lungs. The living so close to neighbours, having less space and privacy. The dog barking at all the delivery trucks and workmen outside all day long. Our poor dog is not a city dog.

And the biggest thing we miss, of course, is our family and friends. That is, hands-down, the hardest part.

We’ve made friends here, slowly but surely, from lots of different countries and cultures, and we will miss them, too, when we go home. And the thing about London is it’s so transient, so people come and go all the time. Two of my closest girlfriends here are moving away this summer, which I’m sad about. One to Australia for a two-year contract, and one to a town outside of London, which may as well be as far as Australia, given how often I get out of London.

In some ways I still hold fast to my American-ness: I put on Sesame Street for my kids (Elmo is R’s first celebrity crush) and M and I still watch our favorite American TV shows; I read The Skimm every day to get the American news headlines; I check the weather temperature in Fahrenheit; and I’m still much more comfortable hugging hello and goodbye than doing the European kiss-kiss thing. I’ve gotten better at it, but I still find it a bit awkward. I’ve mastered holding a knife and fork the European way, but it still feels more natural to eat the American way, fork in the right hand. I can feel a subtle shift in my brain when I speak to another American. My mind relaxes a bit and I can speak freely without having to take an extra split-second before speaking to make sure my words and phrases are the ones Brits would use. “In the diary” can go back to being “on the calendar,” I can call pants pants, and American cultural references will be understood. And I still haven’t driven over here, not once.

To my surprise, I don’t miss having a car. I’m very used to riding my bike on the left side of the road. I can maneuver the buggy (stroller) on and off a train/bus/tube while minding the gap, no problem. I automatically look in the correct directions when crossing the road. Easy peasy lemon squeezy, as the Brits and my 5-year-old say.

I feel safe here. And while I still get NextDoor emails about house burglaries, muggings, and carjackings back in my Baltimore neighborhood, here it’s the occasional NextDoor email about someone’s front porch planters going missing or someone’s not been picking up after their dog. Or a link from my well-meaning-but-worrywart mother to an article about someone in London sleeping with their garden door open and a fox coming in and biting them in their sleep. (Don’t worry, Mom; as hot as it’s been, we still always close the back door before bed.)

Honestly, I don’t feel all that comfortable sending my children to school in America right now. America has a very serious gun problem, and it terrifies me how little is being done to solve it.

But I’m not going to get up on that soapbox right now. On a lighter note:

If you follow football (OK, Americans, soccer) and the World Cup at all, then you know England has made it to the semi-finals, which has been a really big deal over here. 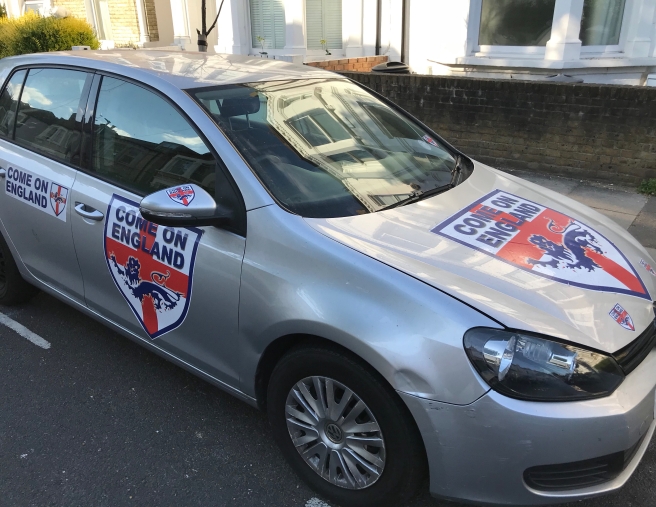 Ironically, the game on Saturday ended up being at the exact same time as the Independence Day party we threw at our house to show our friends what a Fourth of July BBQ is all about. 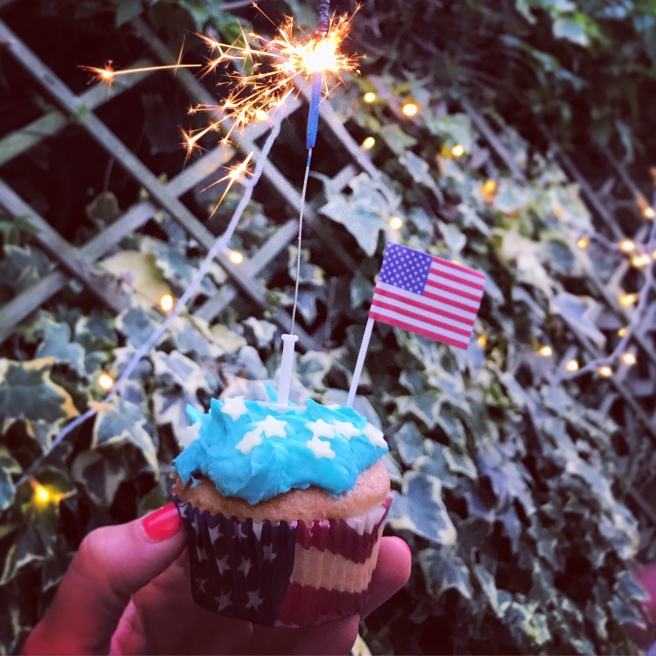 So our American-themed party turned into a World Cup-watching party, too, with a bunch of tense England fans. England’s small revenge for the whole losing-the-war thing, I guess. (It was also like 31 degrees Celsius that day, so by my extremely accurate calculations, that’s about a thousand degrees Fahrenheit in our un-air-conditioned house crammed with 50 people.)

This was the celebration over at Clapham Junction (10-minute walk from our house) after Saturday’s win. Drunk English people have been carrying on out in the streets after all the England matches, singing their anthem “Football’s Coming Home,” which M and I had to Google because the cultural reference was lost on us.

It really is an earworm. M keeps singing the refrain over and over. Actually, I’m starting to think that may be all you have to do to pass the British citizenship test.