Cough, cough. Is this thing on? [Blows off the dust]

“Can’t wait to read your Royal Birth blog post!” my mom texted me yesterday. Oh, right. I have a blog. I nearly forgot. We were in the States for the first two weeks of the month, and we’ve been just trying to get back into the swing of things here ever since.

Honestly, it hadn’t occurred to me to write about the new prince. Yes, the royal birth is big news, but not in an affects-my-daily-life sort of way. I wasn’t one of these—ahem—intense royal fans camped out in front of St Mary’s Hospital since the beginning of April.

But I didn’t have much to do today after R’s morning music class, and I’d been itching to get out of “the bubble” (what the other neighbourhood mums call our walkable area, which is sometimes hard to leave) and go into central London, so this was as good an excuse as any. So this post is for you, Mom.

So R and I headed over to Buckingham Palace to see the “golden easel” with the official royal announcement of the birth, which is there for 24 hours. In true British fashion, there was an orderly queue to file past and have a chance to snap a photo.

That was really all there was to see, other than the Union Jack flag flying over the palace in honour of the new prince. 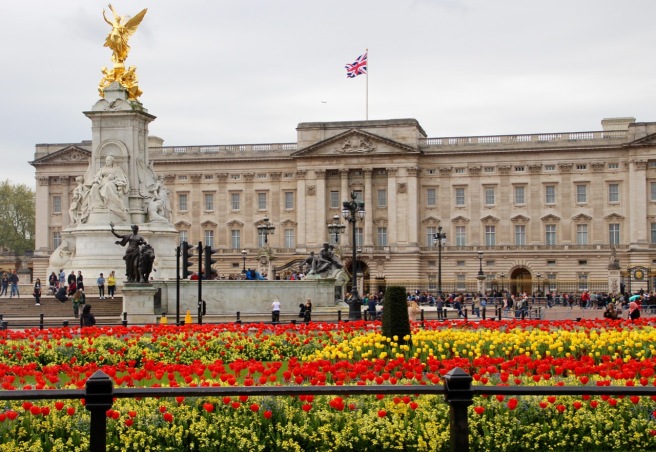 I don’t know what’s happening outside Kensington Palace, where the Duke and Duchess and new baby are; maybe the fans and media from outside the hospital have relocated there?

The flowers in front of Buckingham Palace are really pretty right now, I must say.

R and I went across the road to the playground in St James’s Park for a bit, then heard a trumpet fanfare nearby. We went over to see what that was about, and discovered the soldiers and horses of the King’s Troop Royal Horse Artillery leaving Wellington Barracks for their trip to Hyde Park for this afternoon’s gun salute.

When I told M (he met us out for lunch) about seeing the troops heading out for the gun salute, he replied, “What gun salute?” “For the new royal baby,” I responded. “He’s FIFTH in line for the throne!” he scoffed and rolled his eyes. But that’s just how things are done where the royal family is concerned. It’s all about pomp and ceremony. (M is not a fan of pomp and ceremony.)

On the way home, I spotted this sign on our high street:

I also picked up a free newspaper from Waitrose.

And my mail is sporting this postmark:

But that’s really all that’s going on around here where the royal baby is concerned. Now we are just waiting to find out the name, like everyone else in the world.