Last night I had the amazing opportunity to be in the studio audience for a recording of Comedy Central’s Live at the Comedy Store. Just a typical Monday night, right?

The Comedy Store is a famous comedy club in London’s Leicester Square/Piccadilly Circus area, and I’ve looked at the website a few times and thought about buying tickets, but hadn’t actually been yet. But I signed up for this website a couple months ago called Standing Room Only, which books people to be in studio audiences for live and recorded television shows, and on Saturday, I got an email saying I had two (free!) tickets to this recording.

I asked a friend to go with me, and fortunately, both our husbands were able to get home from work a little early on Monday so we could go. My tickets didn’t actually guarantee we’d get in; we had to join the queue outside, wait to be issued a numbered wristband, and then slowly move up in the queue as they gradually let people in, crossing our fingers it wouldn’t fill up before we made it to the front. Curious passersby would stop and ask what we were queuing for. “Coldplay’s playing a secret show. You have to show a lemon at the door to get in,” my friend deadpanned.

They taped four shows in a row, each with three stand-up comics, so we saw a dozen comedians do their sets. It started around 6:45 and ended just after 10. I think I may have permanent laugh lines now, but it was worth it! 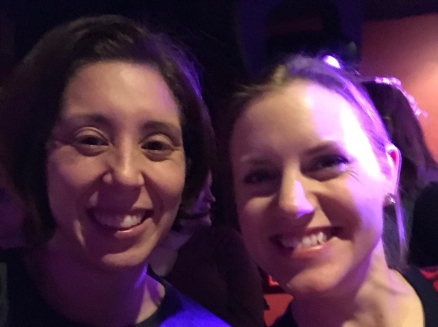 There was a host who led us all in our clapping and cheering. Yes, we had to practice that, and variations of it. And at the end, several of the comedians returned to the stage to re-record a line they’d flubbed, or re-do their “pickups”—where they welcome the viewers back after the commercial break.

All the stand-up comics were British except for one, so I’m guessing the show will air only in the UK, though I don’t know that for sure.

My favourites of the night were Tom Allen, Fin Taylor, Adam Hess, and Ed Gamble. Check out some of their clips online if you need a laugh!