One of the things M really wanted to do in Marrakech was go on a street food tour. This one had very high ratings online, and it did not disappoint. Even if you don’t eat at every stop (I certainly didn’t want to), you will not go hungry! We both really enjoy learning about different cultures through their food, and this tour offered just that. 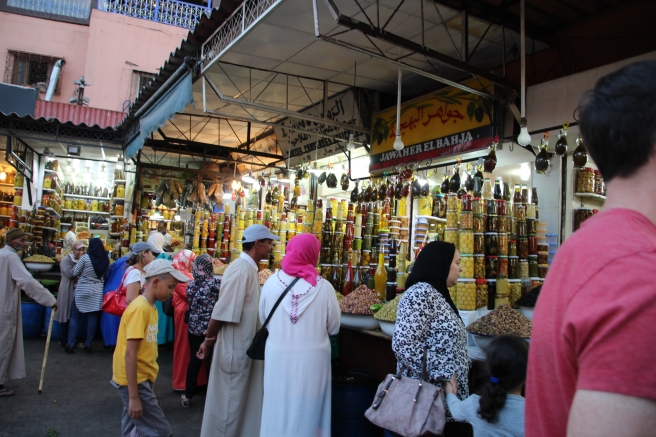 The tour meets at the big square, Jemaa el-Fnaa, in the evening, and ours separated into two groups of 6, each with a licensed local guide.

Our group’s first stop was at a place I may not have even known was a restaurant if I’d walked past it. They serve steamed lamb, which is cooked down in a hole in the ground all day, as well as lamb cooked in tangia pots… and sheep’s head.

You can BYO lamb carcass to be cooked here. Women show up first thing in the morning with their lamb, pay a small fee, the lambs go down in the hole where they are steamed over a fire of olive wood, and then the women return at noon to pick up their steamed lamb in time for lunch.

Alternately, people can load up their own tangia pots at home, typically with lamb, garlic, preserved lemon, and saffron, and bring them to be cooked there, again for a small fee.

We were served both styles of lamb, the plain steamed lamb as well as the tangia-cooked lamb, plus a sheep’s head. And mint tea, of course. Always. 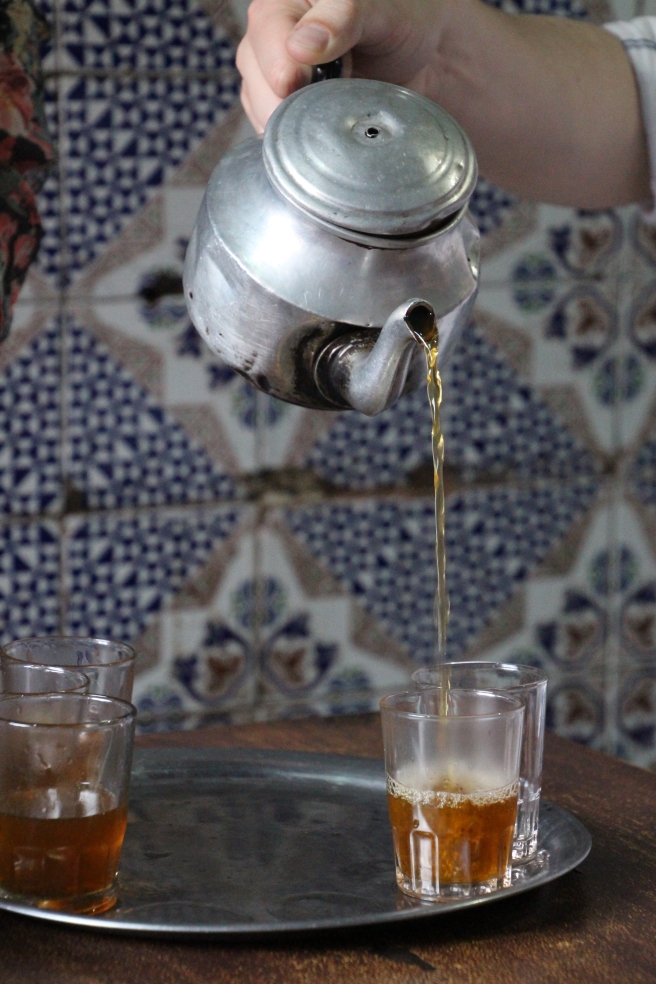 I don’t eat lamb, as I draw a pretty firm line at eating baby animals, but I did manage to scoop up a bite of it with some bread and give it a try. I just couldn’t do the sheep’s head, though. Too baaaaad.

Our guide said they typically season the sheep with just some cumin and salt. “We use cumin a lot,” she said; “we call it Moroccan Imodium.”

The third stop was I think my favorite food on the tour. Massimon pancakes are dough stretched out and fried in fat, with different topping options (kind of like ordering a crepe), rolled up and handed to you, hot and fatty and delicious. They cost about 50 cents.

The ones we were served were topped with onions and seasoning, but we found a street stall the next morning making them and chose a chocolate spread for those. Yum.

Also at this stop, we tried a typical Moroccan soup made with chickpeas, which they use to break the fast during Ramadan.

Stop 4 was another place I wouldn’t have known what they were serving if I hadn’t been on this tour. It was grilled sardine sandwiches, with olives and tomato, but it didn’t taste fishy at all. The grilled sardines looked more like falafel or meatballs. I was surprised by how much I liked these sandwiches! 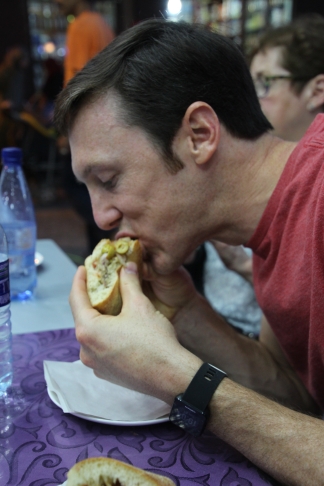 Stop 5 didn’t actually have anything for us to eat. It was at a public hammam, to see where they have the fire to make the steam for the baths. The connection to the food was that people also bring their prepared tangia pots here to be cooked by the steam. 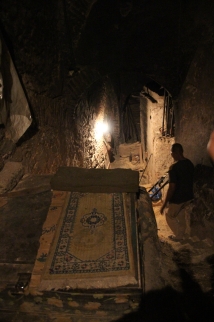 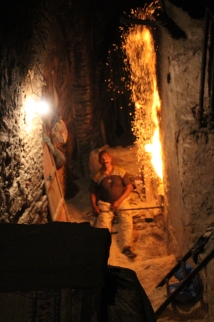 A public bath that doubles as a public oven, pretty efficient! 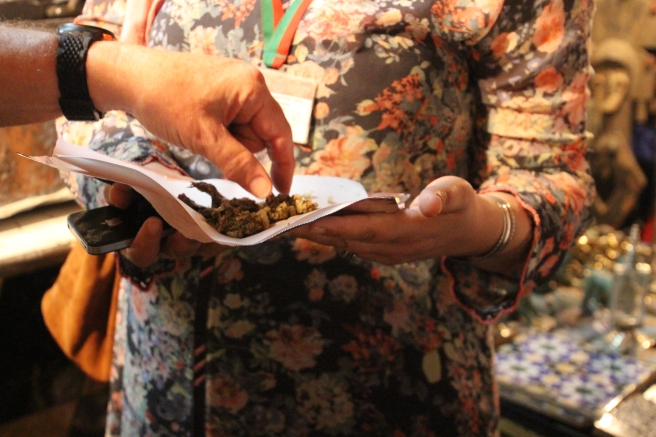 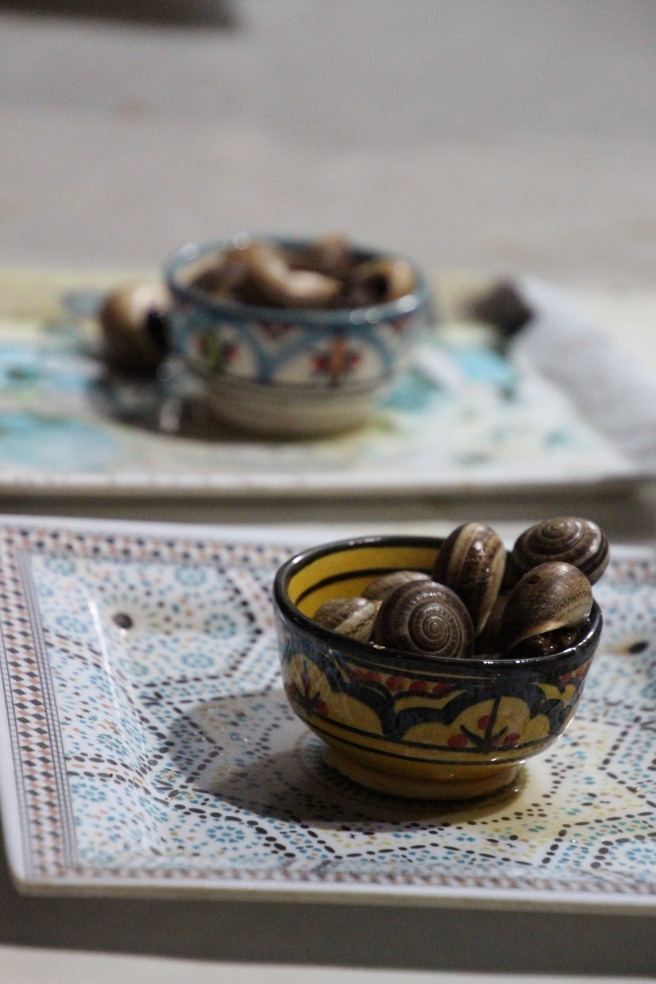 Again, M was MUCH more enthusiastic about this stop, but he did talk me into trying one small snail. Our eighth stop was for traditional couscous with vegetables, which ended up being nearly identical to our lunch that day. At this point in the tour, I was full (even without eating half of what M did!), so I didn’t eat very much, though it was very good. If it had been the first stop on the tour I would have eaten a lot more of the couscous.

I enjoyed some refreshing pomegranate and mint tea to cleanse my palate after all the different flavors.

Our final stop was for dessert: traditional Moroccan cookies and fresh “juices” (the juices were more what we would call smoothies).

I had a mango-orange-pineapple, which was fantastic, but M’s avocado-date-almond was even more amazing.

We were absolutely stuffed after the 3-hour, 9-stop food tour. Our guide brought us back to Jemaa el-Fnaa, where the nighttime entertainment was in full swing.

We wandered around for a while, taking in the sights and sounds while we digested our feast. 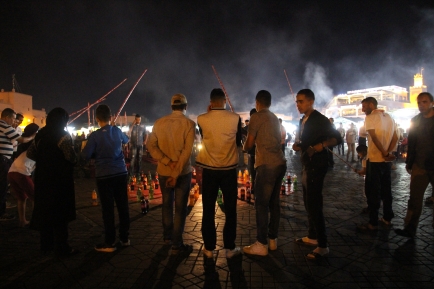 I would highly recommend the Marrakech food tour to anyone, even if you aren’t as brave as M about trying new and different foods. You need to go with an open mind, though. And an empty stomach!

Read more about our trip to Morocco: {Marrakech, Part 4}