A few days late, but a very happy Christmas to everyone! On Christmas Eve, we went to the 4 p.m. lessons and carols service at Westminster Abbey, which was really special. 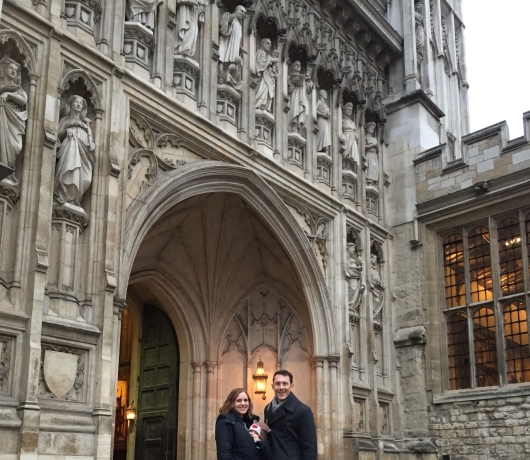 I’ve been to Westminster Abbey a few times—once for Evensong, and a couple of times to tour it (which you have to pay about £20 to do)—but I really wanted to go to the Christmas Eve service there, at least once. It’s just such an amazing church, with so much incredible history going back nearly a thousand years, as the setting for so many coronations and royal weddings and funerals.

They release (free) tickets on certain dates at certain times in November, and I was at my computer, ready to click as fast as possible as soon as they were up for grabs. I tried last year, with no success, but this year I was able to get four, which was enough for M and my parents and me (the kids didn’t need tickets).

The seats are unreserved and the doors open an hour before the service, so my parents went on ahead to queue outside, so we wouldn’t have to have the girls waiting outside for a long time.

My parents got us good seats, and we slipped in shortly before the service began. It was not like the church service we went to locally last year on Christmas Eve, which was a chaotic family service packed with noisy children; I spent the whole service a bit tense, trying to shush the baby we normally encourage to talk (how confusing for her), poking Cheerios in her mouth, and whispering “thank you” and “sorry” to the people behind us as they picked up her book for the dozenth time; and trying to keep E, who so badly wanted to hold the open-flame candle herself, from catching her hair on fire or burning the 800-year-old sacred building to the ground. I could just imagine the Christmas Day news headlines about THAT.

Because of the way the seats are configured, which isn’t that conducive to everyone being able to see, the choir and the readers move around the abbey throughout the service, so everyone can have a chance to see something at some point. There are also video screens up above, so you can see what’s happening at all times on there, at least.

The choir of men and boys was beautiful, and the acoustics fantastic, and my mom was in heaven. The readers are often prominent or famous people; this service featured the police commissioner for the City of Westminster and the Italian ambassador, among others.

The service lasted about an hour and a quarter, which felt just right. We caught a taxi home, and then had a nice Christmas Eve night with dinner at home, reading ‘Twas the Night Before Christmas and Polar Express with E, and putting out both milk and cookies AND a mince pie and a “small glass of something” for Santa. Wanted to cover both American and English concepts of what Santa might like.

Christmas morning was a happy flurry of present-opening and coffee and butterhorns (my family’s recipe we make each year just for Christmas morning) and Christmas music and a fake fire crackling on the TV screen (thanks, Netflix). E got everything on her wish list: a scarf, watch, and balloons from Santa; Baltimore Orioles cups, straws, and pants from her Mimi and Pops; and a pedal bike from Mom and Dad.

R’s favorite Christmas toy by a wide margin was a piece of red ribbon, which occupied her for hours. Not sure why we bothered to buy her anything at all! 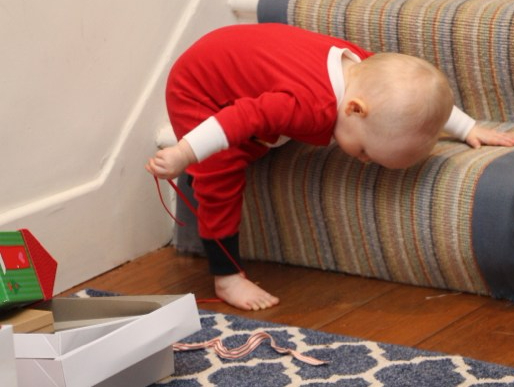 We incorporated a few English Christmas traditions into our own Christmas traditions, such as popping open Christmas crackers at the Christmas dinner table (and then everyone must wear their paper crown that comes inside), and gathering around the TV to watch the Queen’s Christmas Day message (which comes on at 3 p.m., and lasts about 10 minutes). 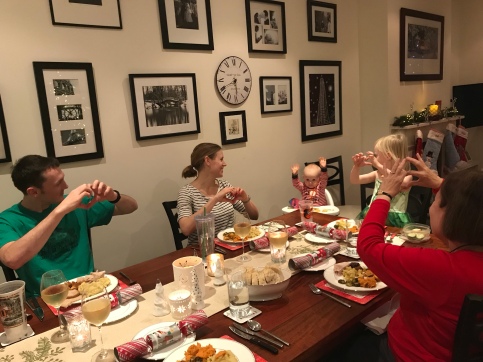 I did not, however, serve a traditional English Christmas pudding. Maybe next year, if we’re still here….