Tonight M and I attended the annual Handel’s Messiah concert at St Paul’s Cathedral. It’s a free but ticketed event, and the tickets are snapped up as soon as they become available. 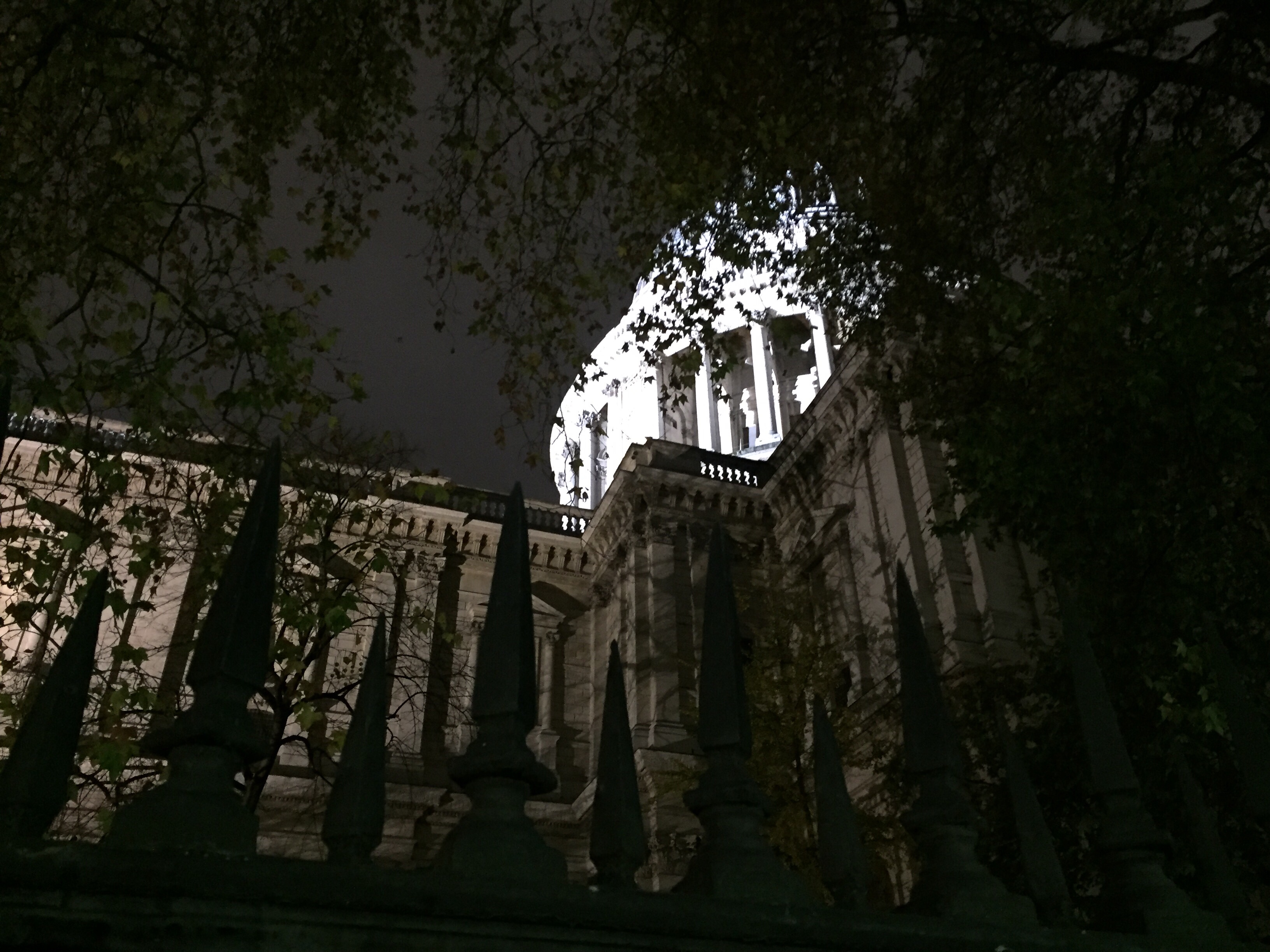 My mom was really hoping to be here for it, and was disappointed when she learned the concert was a week before she and my dad arrive. She loves the Messiah, plus she is an Anglophile and a history buff, as well as a former choir girl herself, so hearing the “Hallelujah” chorus echoing off the dome of Wren’s masterpiece would have been total bliss for her. Though I’m probably just making her feel worse now. Should I also tell her Colin Firth and Pierce Brosnan were the greeters, and they were handing out free wine and popcorn?

It was sung by the St Paul’s Cathedral Choir, which is made up of 30 boy choristers and 12 Vicars Choral, who are professional singers, nearly all men. The soprano parts were sung by the boys, who looked so small up there to be singing so beautifully. The orchestra was provided by the City of London Sinfonia. The St Paul’s Cathedral Chorus, the church’s amateur choir, also joined in the chorus. 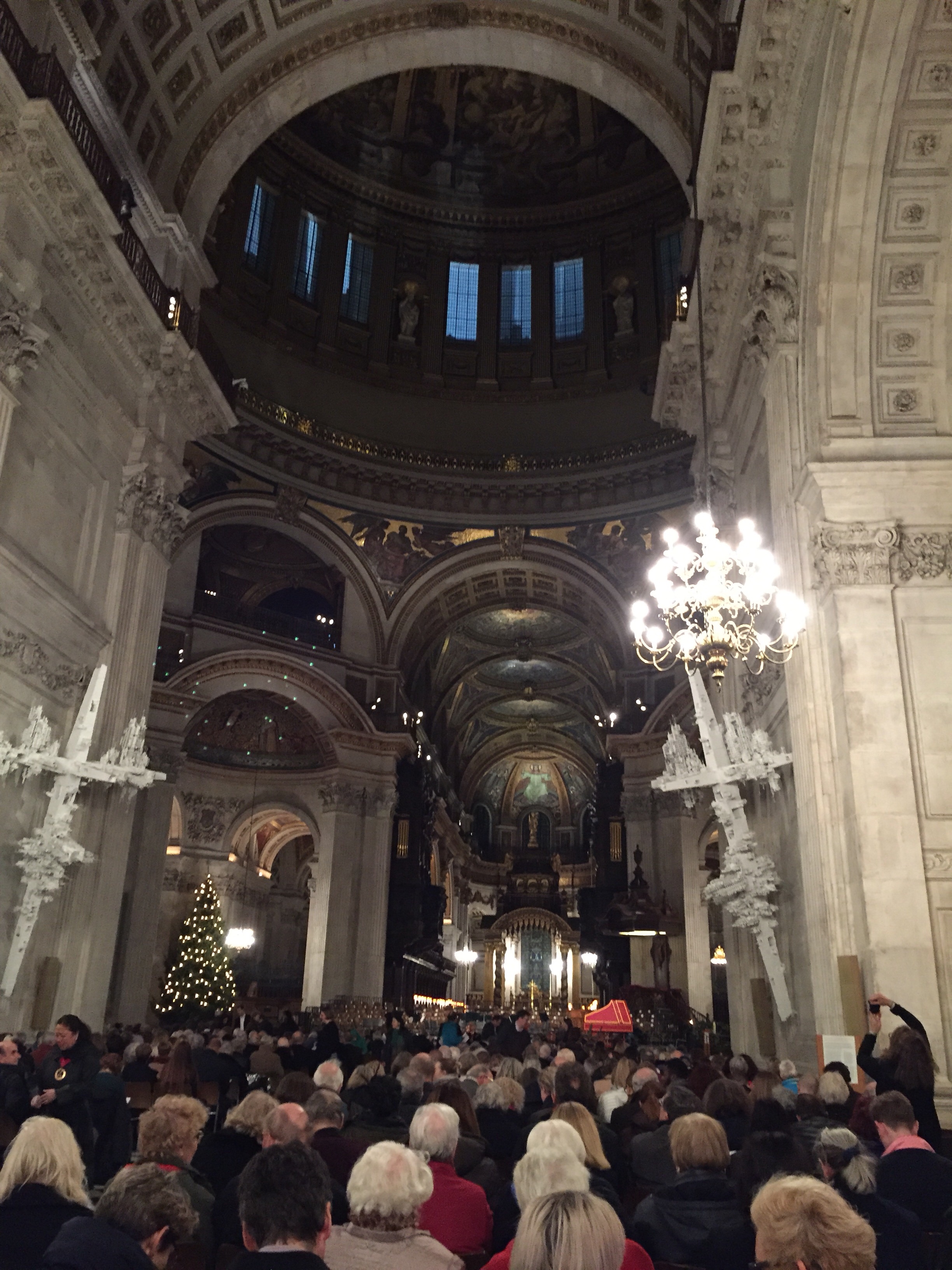 Messiah is a beautiful piece of music, which I’ve heard many, many times over the years (closing my eyes I could imagine I was back at home in Oregon, the music playing on the stereo while my mom and I baked Christmas cookies), but I actually didn’t know anything about it.

It’s an 18th-century English oratoria, which is basically an opera, but without actors or stage action. This type of performance was pioneered by George Frederic Handel, and he wrote Messiah in just three weeks. I also didn’t know that about half a century later, Mozart made additions to the orchestral score. 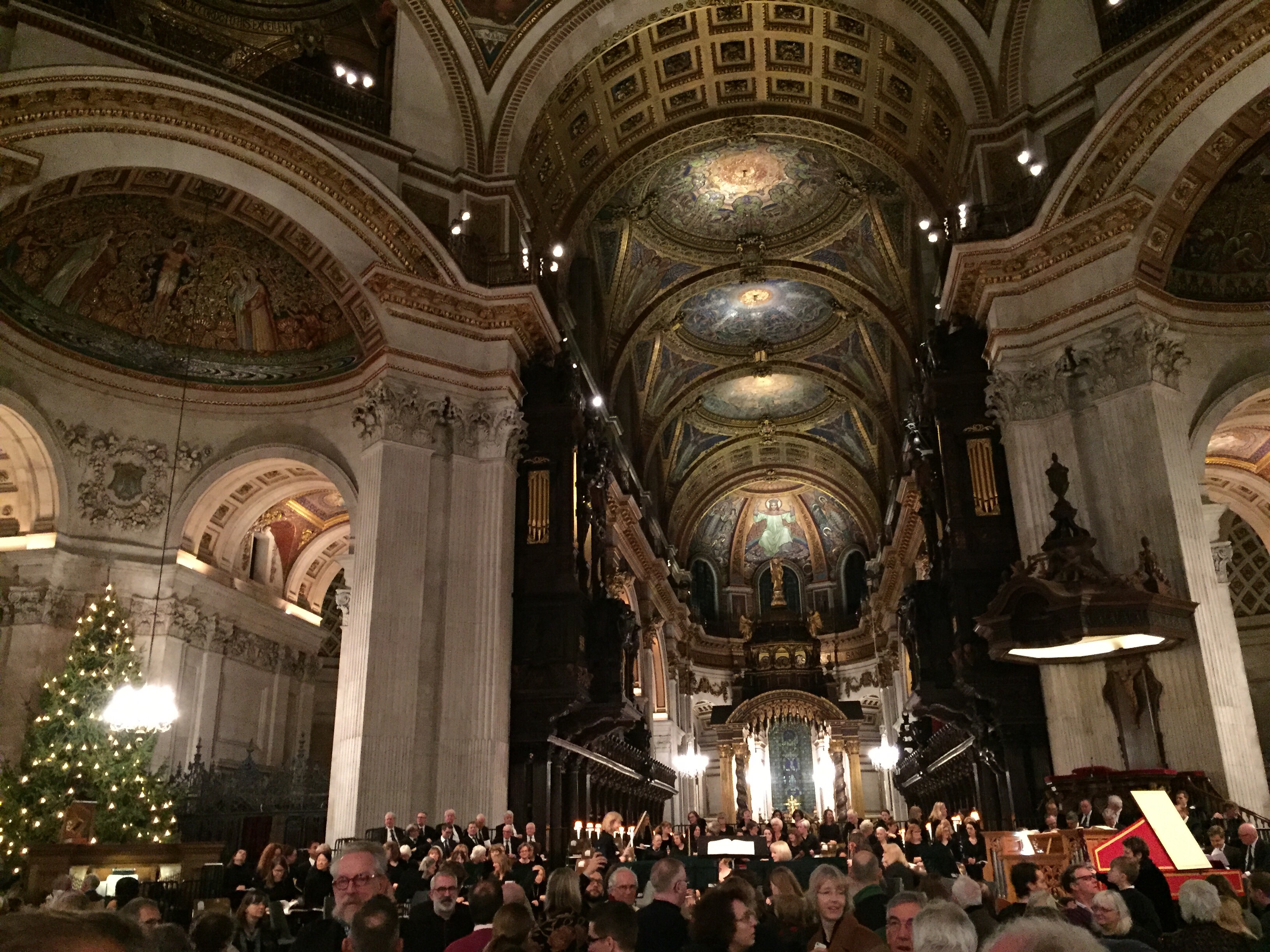 It’s customary to stand during the “Hallelujah” chorus, and the story is that when George II first heard Messiah, he was so thrilled by this part that he stood up. Since court protocol dictated that no one should sit while the king was standing, the whole audience stood up as well.

I don’t think there were any royals in attendance this evening, but we all dutifully stood for the “Hallelujah” chorus, and evidently someone nearby was so thrilled that they couldn’t contain their, uh, personal wind. (M swore in a particularly magnificent house of God it wasn’t him.)

Affronts to the olfactory organs aside, the concert was lovely; but it was COLD in there. We kept our coats on the entire time and were still chilled. At least where we were sitting, back in “economy class.” It felt warmer toward the middle of the church, where the choir and musicians were, and a closer section of reserved seats—not sure how you get tickets for the reserved section. I walked up there to before the concert started to get a better look and was brusquely reprimanded like I was trying to use the first-class lavatories.

The tickets we had were unreserved seating, so we joined the very long queue that wrapped around the building before the doors opened at 5:30, a full hour before the concert started. If they want to make some money off this event, all they need to do is set up some tables selling hot mulled wine.

The concert lasted two and a half hours, with one short interval after Part 1, and an offering collection after Part 2 (the suggested offering was £10 per person).

Thank you, Mom, for getting us the tickets, and I really wish you could have been there, too. Maybe next year?

One thought on “Handel’s Messiah at St Paul’s Cathedral”

Kicking off the holiday season in Charm City 🎆
76 days later… our stuff caught up with us 🇬🇧🇺🇸
Move-in day has finally arrived 🏠
Visiting my in-laws’ town always feels like I’ve stepped into a John Cougar Mellencamp song 🇺🇸
Bringing some 🇬🇧 style to 🇺🇸 for our repatriation 🗽
Follow Walks Between the Commons on WordPress.com
Loading Comments...
%d bloggers like this: