As I mentioned in my last post, my best friend from growing up in Oregon, Jess, and her husband Tom and their nearly-2-year-old came to visit us in London just before Thanksgiving. Unfortunately, their little guy didn’t adjust too well to the 8-hour time change from their home in Seattle, so we didn’t do all that much during the day, as he was up for half the night for the first week. (He’d wake up in the middle of the night—dinnertime in Seattle—asking for quinoa.)

Fortunately, both Tom and Jess had been to London before, so they weren’t expecting to do anything touristy this trip, just hang out with us.

We did manage a few outings into central London, however. Jess, M, and I went to watch professional tennis one night. The ATP Finals were on at the O2, and we got to see Jamie Murray (Andy’s brother) and Bruno Soares v. Ivan Dodig and Marcel Granollers.

The doubles match was followed by singles, which was meant to be Rafael Nedal (ranked No. 1 in the world) v. Dominic Thiem (ranked No. 5), but Nedal pulled out due to injury, so he was replaced by Pablo Carreno Busta (ranked No. 10). That was a surprisingly exciting match, going to three sets.

This was my first time watching pro tennis in person, and I marveled at how they can focus with that many people watching them.

We also paid a visit to the Transport Museum, one of E’s favorite places. We knew that would be a hit with their little man, who loves all things transportive. He was happiest just riding around on double-decker buses. “I riding on a bus! I riding on a bus!”

On Sunday, we took them to the Sky Garden, one of our favorite places to take guests for a great view of the city. It’s perfect to go at sunset this time of year (our ticket time was for 3:30), and enjoy a drink from the bar while watching the lights come on across London.

After that, we tubed over to Oxford Circus to show them the big Christmas lights on Oxford, Regent, and New Bond streets. 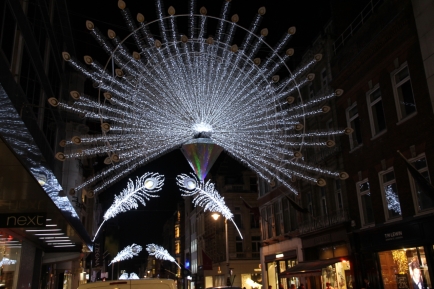 I also like to see the big department stores’ Christmas windows over there. Liberty’s were disappointing this year, but John Lewis’ were a big hit with our kids, who got to tickle a monster’s feet.

Their last day, I had a booking to take Jess out for a fabulous afternoon tea, but this was unfortunately canceled due to a stomach bug that swept through our household and took several of us down. On Monday afternoon, we were on our way to the Science Museum when E said she felt really hot, and then promptly barfed all over herself, me, and the No. 49 bus. We got off as fast as possible, and then she started wailing; not because she felt sick, but because she was upset we were no longer going to the Science Museum.

I’ll spare you the rest of the details, but the bug took me down next, and I slept the entire next day, the last day of their trip. World’s worst hostess, that’s me!

Thank you guys so much for coming to visit, and for putting up with the lack of sleep and everything else! We love you and hope you come back… but wouldn’t blame you if you’re not thinking about it anytime soon!