Seems I’ve been on a theatre kick lately, judging by this being the third post in a row about shows I’ve seen recently. Honestly, with the state of the world lately—and the disturbing news coming out of our home country, in particular: North Korea and Trump tossing serious threats back and forth, white supremacists marching through the University of Virginia, Baltimore calling for a 72-hour “cease-fire” like it’s a war zone because there have been 208 homicides this year so far, and it’s only August!—can you blame me for wanting to mentally escape the real world for a few hours?

This week M and I had a date to see Hamlet. Specifically, to see Andrew Scott play Hamlet. If you’ve watched Sherlock on TV, then you’ll know Andrew Scott as the insane villain Moriarty. Hamlet sounded like the perfect role for him, and we were eager to see him perform live. We were kind of amazed we were able to get tickets on fairly short notice. Thank you to M’s parents who babysat for us that night!

When we got to our seats in the stalls of the Harold Pinter Theatre, I looked in the programme and discovered Ophelia was being played by Jessica Finchley Brown, aka Downton Abbey‘s Lady Sybil! Even better! This is now the fourth Downton actress I’ve seen on the stage; we saw Phyllis Logan (Mrs. Hughes) and Zoe Boyle (Lavinia) in a Noël Coward play in Bath last summer, and my mom and I saw Dame Maggie Smith (the inimitable Dowager Countess, of course) years ago on the West End in a two-woman play alongside Dame Judy Dench. But back to the present. 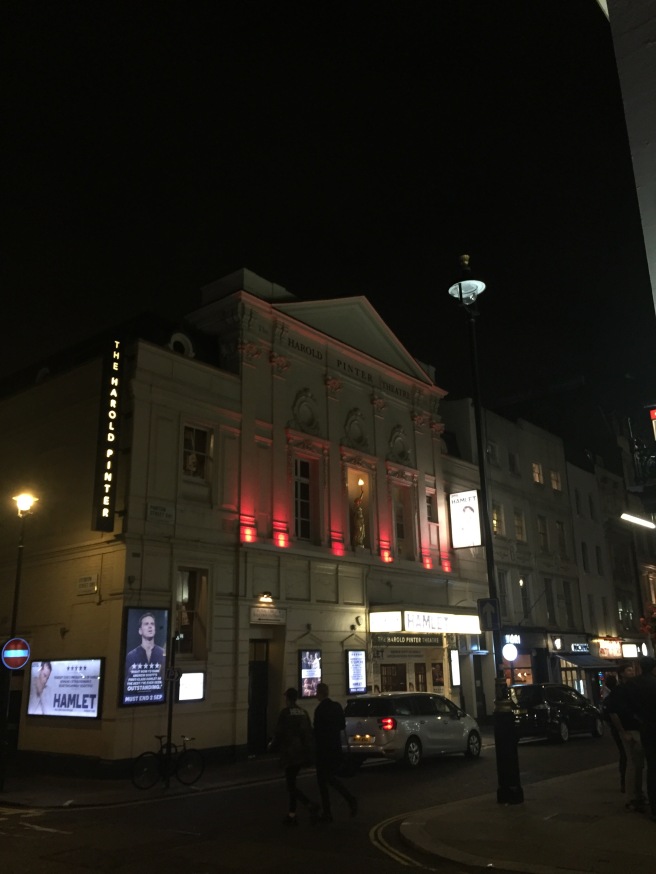 The play, particularly the acting, was phenomenal. It was set in modern-day Denmark, and I especially liked how they incorporated the use of video. I must have seen and read Hamlet at least half a dozen times over the years, and this was easily the best.

An unabridged Hamlet is long, of course. It started at 7 and ended at 10:50. And it got uncomfortably warm in the theatre near the end. But all in all, it was a great night at the theatre.

A few nights later, we took my in-laws to see The Book of Mormon.

Talk about a completely different show! I had seen it before, several years ago, with my parents in Portland when it was on tour, but had forgotten much of it. While it does aim to offend, the irreverent musical is highly entertaining and laugh-out-loud funny.

It’s been a good run of theatre lately, while we’ve had visitors in town. Anyone else want to come visit and give me an excuse to go see a show?