On Wednesday I went to a stand-up comedy show. I know, on a Wednesday, I’m wild. It was also BYOB. But in this case, that meant Bring Your Own Baby.

This company brings stand-up comedy to mums around London. It’s professional comediennes (or at least today they were all women) doing their regular adult bits, but at noon, to a roomful of mums and babies. The entire concept is in itself pretty funny.

They thought of everything. There were mats on the floor, sprinkled with baby toys, and they had set up a big changing table with changing mats to one side of the stage. They even had high chairs available. And also a bar selling drinks at the interval, in case you felt like there should be a bottle in your mouth as well as your baby’s.

There was a hostess who did a little warmup bit (“There won’t be any wind the f***ing bobbin up here!” (Wind the Bobbin Up is the quintessential song for British babies sung at just about every baby music class or playgroup)), one comedienne, an interval, the hostess for another few minutes, and then a second comedienne. The whole thing lasted about an hour and a half, and a ticket cost £10.

It wasn’t the funniest comedy I’ve ever seen or heard, but then again, I was stone sober. All in all, it was an enjoyable time, and I’d definitely go again. Baby R enjoyed being able to crawl all over and pull herself up on the chairs, and the second woman did a lot of singing, and R liked that. The lyrics weren’t exactly G-rated, but that’s why they limit the age of child you can bring to under a year. 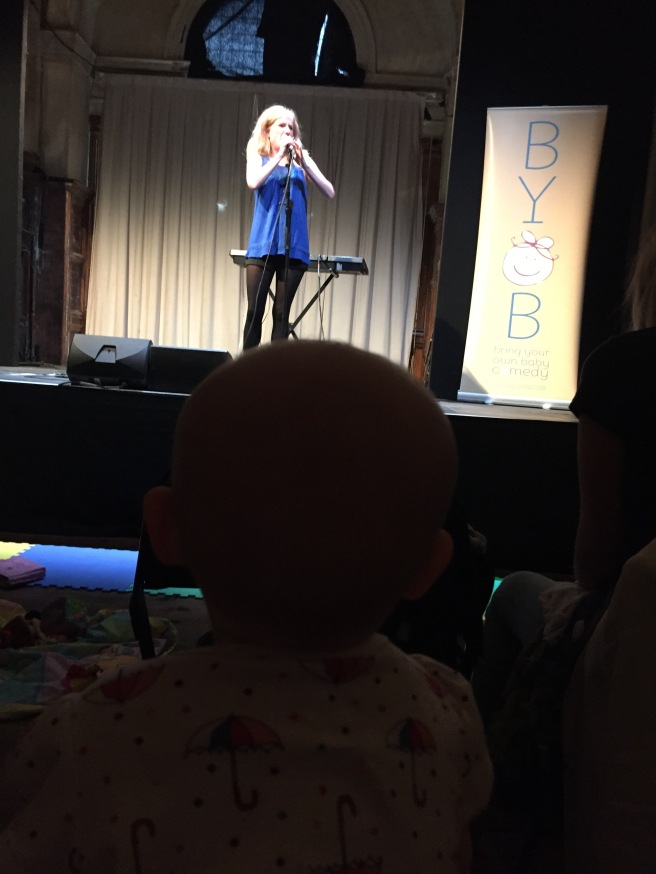 Sometimes I look at Baby R and say to her, “You have no idea how strange your babyhood is.”