Or “Hamsterdam,” as E calls it. I started this post nearly two months ago, but it got long, and I got busy. Better late than never, which was my approach to blogging about Christmas in London, too.

We had a great three and a half days in the beautiful city in the Netherlands in May. I’d been there before, when I was 20, with my parents and younger brother. Since I’d hit most of the big tourist must-dos in Amsterdam back then (Rijksmuseum, Anne Frank’s house, Heineken Experience Tour, a stroll through the Red Light District, and what felt like ALL the churches), and M had traveled there for business a couple times, we didn’t feel pressed to drag our kids to places that aren’t particularly interesting to a 3-year-old, or baby-buggy-friendly. So this trip we could just enjoy being in what is actually a very child-friendly city, despite its reputation for its Red Light District and “coffee” shops.

A friend of mine here in London, Ruth, lived in Amsterdam last summer while her husband was working there, and she had a 3-year-old and a baby as well, so I asked her for tips for things to do and places to go with little ones. We met for coffee and she brought her Amsterdam guide books and gave me so many good ideas she basically planned my whole trip for me! It was incredible. We followed many of her recommendations and enjoyed them all. Danke u, Ruth!

M was there for a conference from Monday to Thursday, so on Wednesday afternoon, the kids and I took an EasyJet flight from London Gatwick. It’s only about 45 minutes in the air, but R screamed for most of that. We had booked her a seat because EasyJet charges £22 for a lap infant, and a seat on that particular flight was £21.90 when we booked, so it was actually cheaper to just book the whole row for ourselves. Thank goodness. I was getting enough dirty looks from people nearby as it was. But the flight was, thankfully, brief, and the three of us made it to the hotel via taxi (a Tesla taxi, no less).

By the time we arrived, M’s conference was just wrapping up for the day, so we dropped our stuff in the room and all headed out into the city to enjoy the beautiful sunlight. We went first to Vondelpark, where it looked like there was a race going on, there were so many people out running and cycling in the nice weather. We walked around for a bit, found a playground area for E, then M got us a couple of biers to enjoy in the grass. 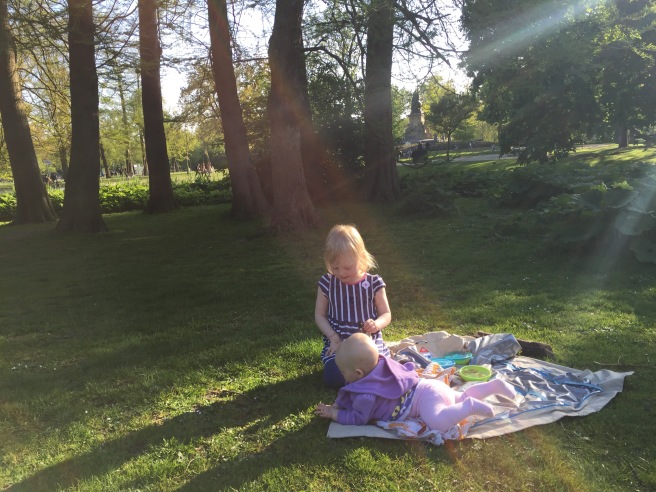 Getting around Amsterdam is easy. The app I use to get around London, CityMapper, works in Amsterdam, too, so we had no problem finding our way around and taking the trams. When you board a tram, there’s a ticket booth staffed by a person, and you simply pay with cash for a one-hour pass or a 24-hour pass. Everyone EVERYONE bicycles there, so the biggest hazard is not noticing there is a bike lane when you walk across the street. You are used to watching and listening for cars, but the bicycles are whizzing by constantly, too.

For dinner Wednesday night, we went to Foodhallen, the obviously named food hall, one of Ruth’s recommendations. We loved it, though we definitely kept the kids out too late. Such a fun atmosphere and lots of delicious food options to try. 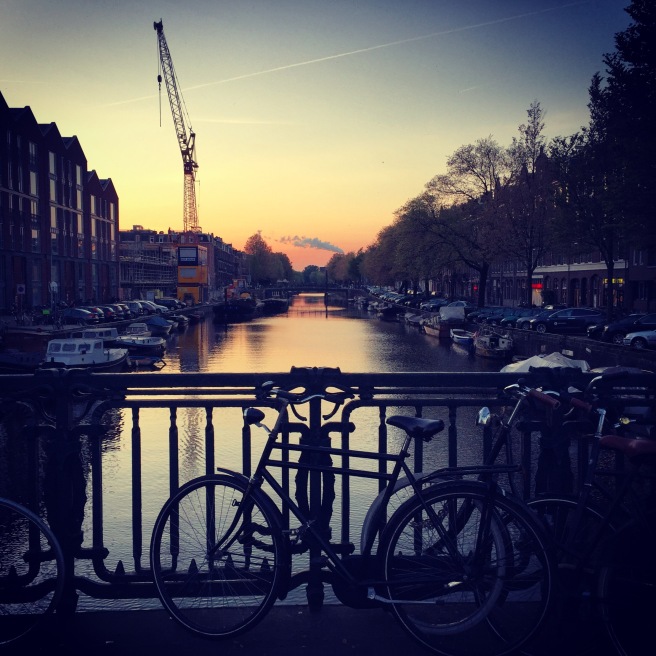 On Thursday, I took the girls to a cafe near the hotel for breakfast while M was at his conference. Once his conference wrapped up, he met us and we took the train to Zaanse Schans, which is the postcard-perfect little town of old Dutch windmills for tourists to take selfies with.

Zaanse schans really is adorable. When the old Dutch windmills and houses were becoming obsolete, they moved a bunch of them into this one area. It’s kind of like Colonial Williamsburg: a living museum, with people dressed up and demonstrating the ye olde Dutch ways of life. And also it’s full of Chinese tourists.

Some of the windmills/museums charge a few euros for entry, so we mostly went into the ones that were free to enter, which were mostly places with shops ready to take your euros for some ye olde souvenirs.

We went into an old grocery store (the first Albert Heijn), a working windmill that was grinding spices, a bakery (the soft almond cookies and apple beignets, oh my!), a cheese shop where they demonstrated how they traditionally make gouda (pronounced “hhhowda” with a guttural-sounding H), and a clog shop, where they demonstrated how they carved a shoe out of a block of wood.

We also took a 45-minute boat ride on the river, which was a nice way to see the windmills and give E a break from walking and a chance to eat a cheese sandwich for lunch.

That evening, we headed back into the city, and walked from the Centraal train station to a nearby playground Ruth had marked for me on the map in her guidebook. She had promised it was in a picturesque area right on the canals, and so it was. 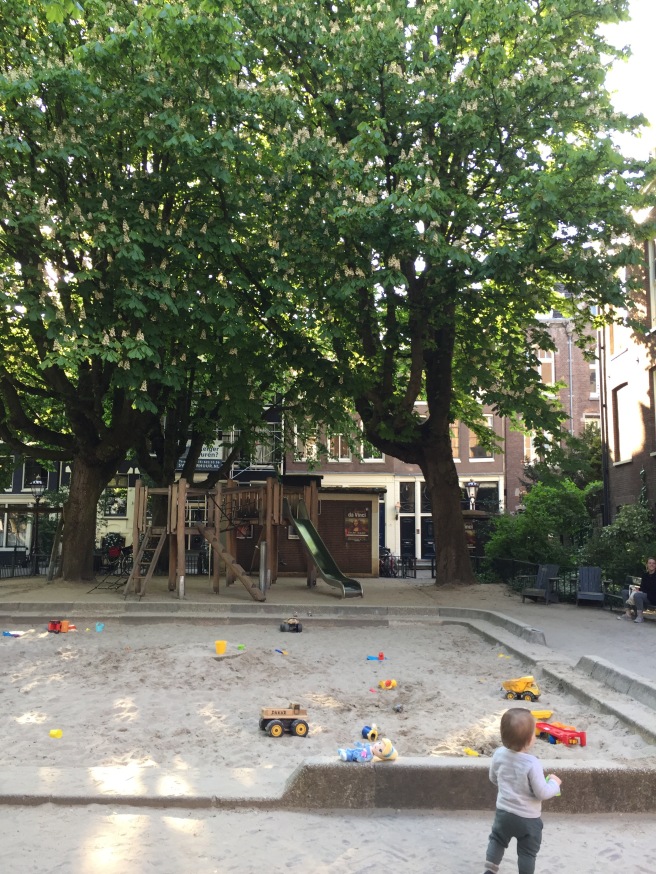 We picked up some provisions from a little deli shop and sat in the playground, snacking, sipping our beers, letting E play, and enjoying the sunshine and serene surroundings. 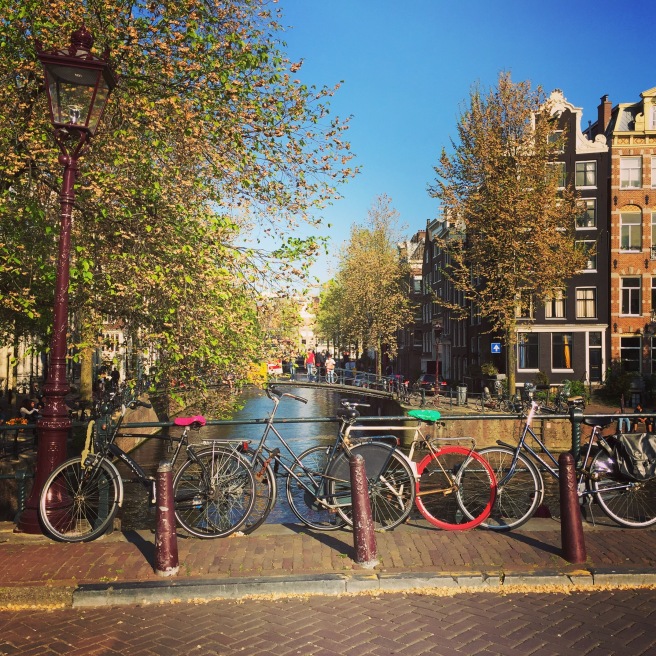 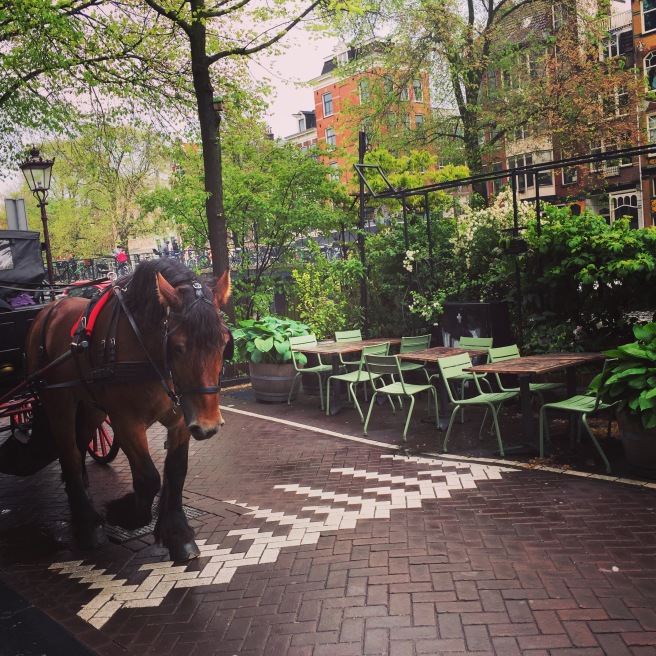 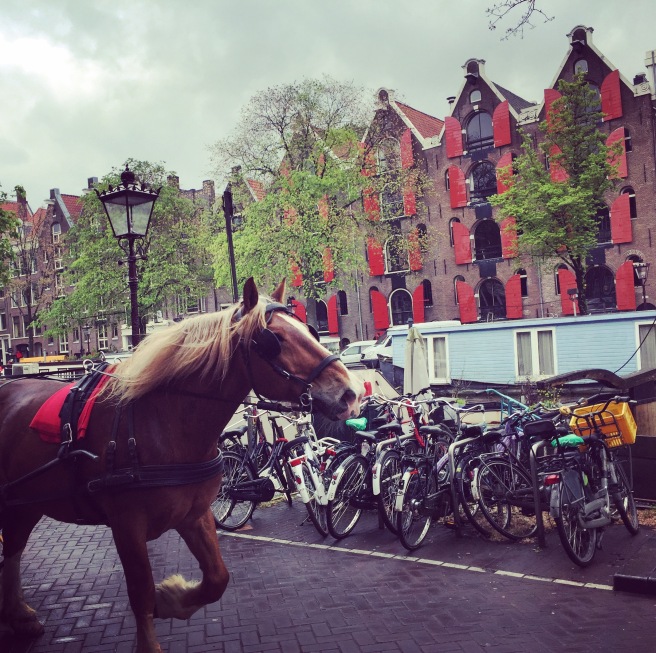 That night, we put the kids to bed in the hotel room, and took the baby monitor downstairs to the hotel’s Michelin-starred teppanyaki restaurant. I had never been to a Japanese hot-plate restaurants before, and it was impressive. 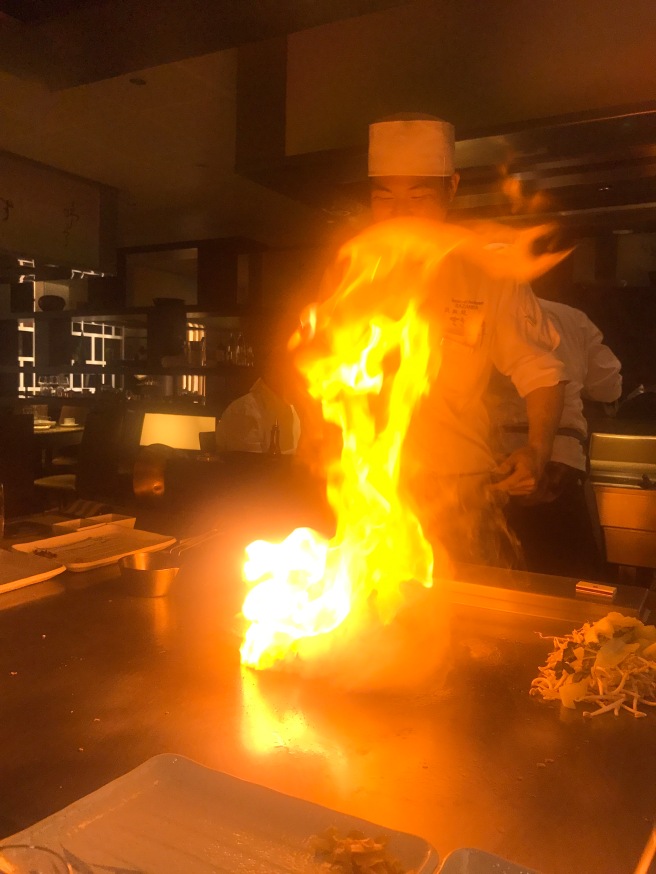 When you go Dutch for breakfast, you must have giant pancakes. So we went to a place literally named: PANCAKES!

It’s tiny inside, so get there early, or be prepared to wait. It’s very kid-friendly; they gave E coloured pencils and colouring postcards, and at the end of the meal, gave her a little Dutch clog keychain, which is now attached to her school bag. The pancakes were good, but the coffee was actually vile, so we had to go looking for a coffee shop (the coffee-selling kind, not the weed-selling kind) afterward.

It was a rainy day, so we wandered around the Jordaan and the Nine Little Streets area, ducking into shops to get out of the rain.

We came across a bead shop, so I asked E if she’d like to go make some jewelry, so we did that for a while, waiting out the rain. (A much longer while than M expected. Sorry, honey. But how long did you think it would take a child to choose and string beads?) 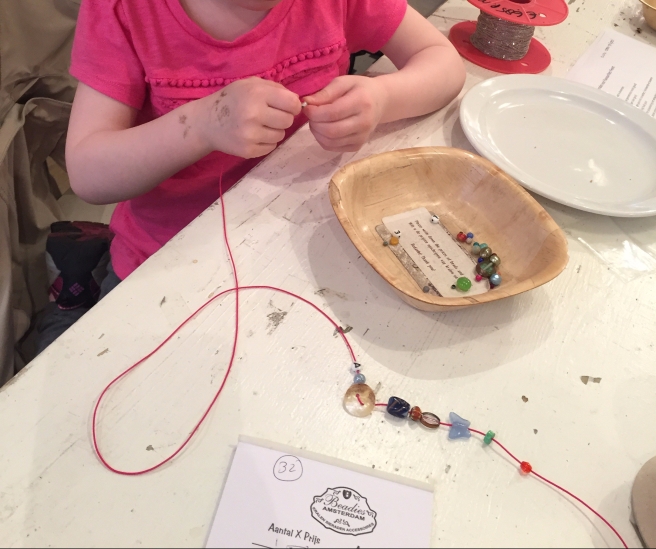 I had noticed a print I liked on the wall of the Pancakes! restaurant, which was signed “Eddy.” A quick Google search revealed that Eddy Varekamp is an Amsterdam artist who has a gallery and studio in that very neighborhood, so we went to find it. 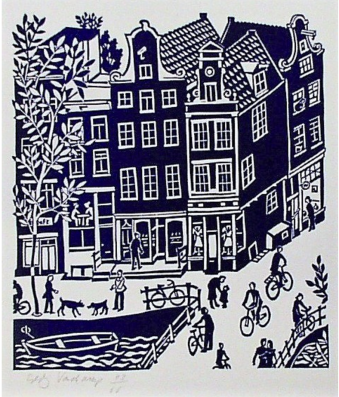 We ended up chatting for a long time with the woman working at the shop, who turned out to be his daughter. She said her dad has been working as an artist there since the 1970s, and his studio is just five minutes from the gallery.

We bought both a linocut print and an original painting of Vondelpark, and she let E pick out a postcard-sized print, too. She also let me nurse and change Baby R in the art gallery, how very accommodating!

After that, we went looking for an X marked on a map in Ruth’s guidebook that she promised was a playground in the middle of a street. We found it right where she’d said it would be, and E and R pretty much had it to themselves, thanks to the weather and its off-the-beaten-path location.

I went wandering down a cute shopping street nearby, and a letterpress shop caught my eye. I went in and met the man who owns it and does all the printmaking. I asked how long he’d been working there, and he replied, “Since 9:30 this morning.” Cute. It was actually something like 50 years.

He made me some tea and offered me some biscuits, we had a nice chat, and I bought a couple prints. 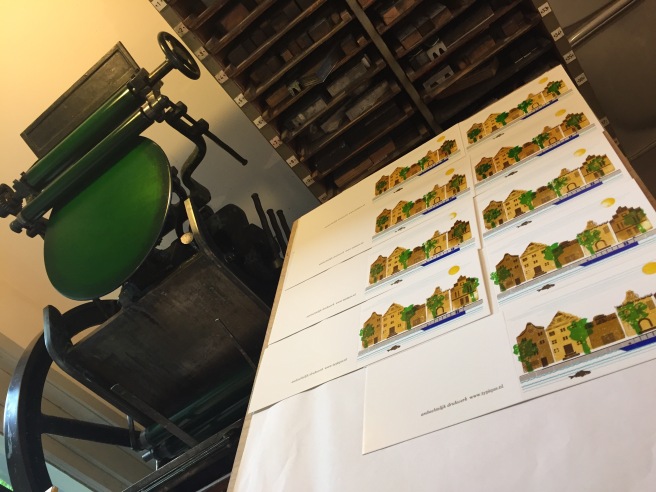 After we finished our artwork shopping spree in the Jordaan, the rain had pretty much let up, and we headed over to the Westerpark. 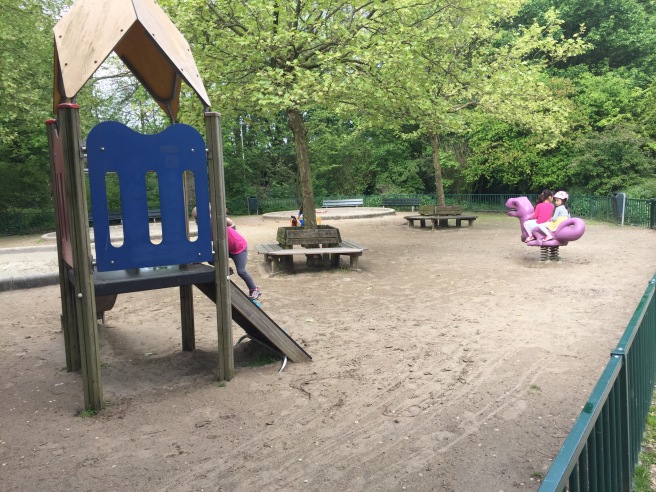 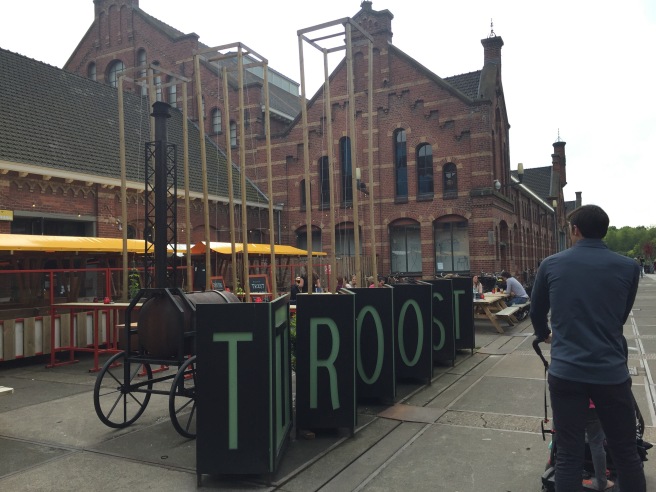 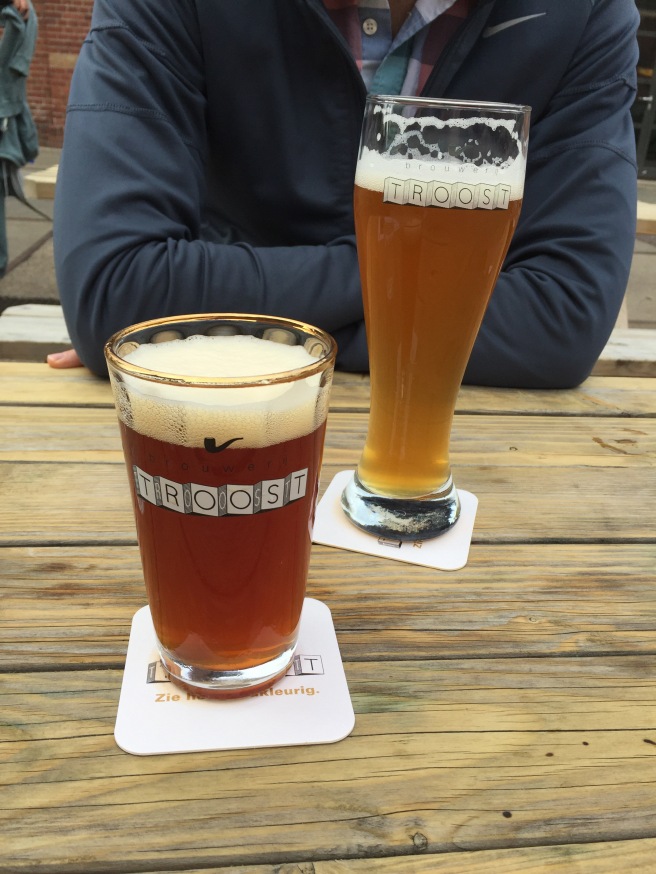 After happy hour, we headed to the hole-in-the-wall Indonesian takeaway place Ruth raved about, and she wasn’t wrong. Make sure you get the aubergine. Trust me.

And because we just have to stuff ourselves silly when we are on vacation, we went to the guidebook-recommended Winkel for its famous apple pie. Delicious.

On Saturday, we were flying back to London in the afternoon, so we only had the morning. M and I decided to split up and each go to the Van Gogh Museum individually for two hours, while the other kept the girls. (Though I did end up bringing Baby R with me. Anyway it’s good to expose her to art!) I had been to the Van Gogh Museum on my first trip to Amsterdam, and I enjoyed it very much both times. It’s doable if you only have two hours, like we did.

For our final stop before heading to the airport, we wandered through the Albert Cuyp Markt. 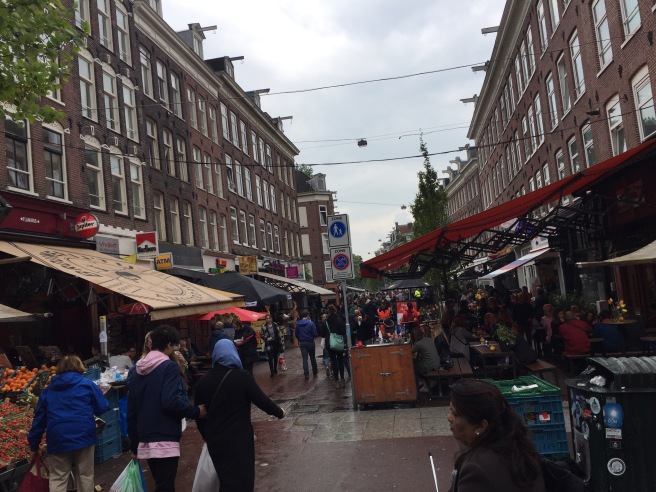 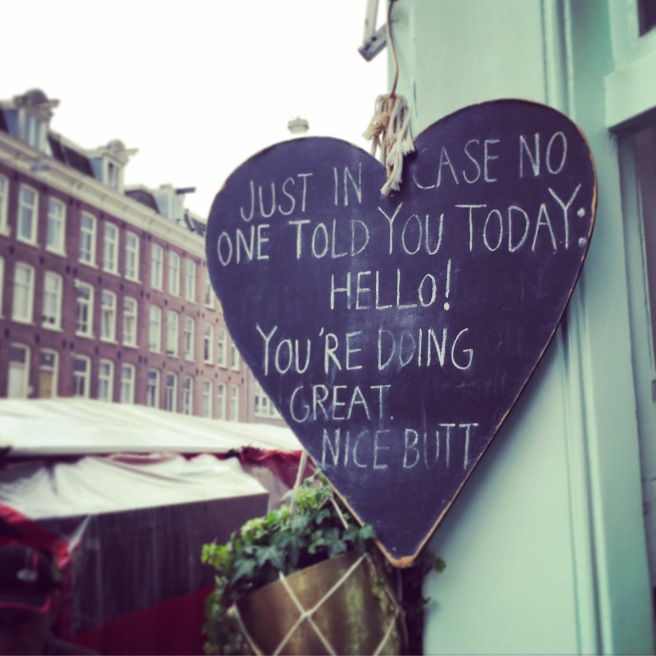 Then it was time to bid a fond vaarwel to Amsterdam, which we did with a couple Heinekens in the airport lounge.

Amsterdam is one of my favorite European cities, and I would recommend it to anyone and everyone. Especially if you have kids and want to travel, this is one of the easiest places to go with kids. It’s stunningly beautiful, the people are friendly and pretty much all speak English, it’s easy to get around (we took the trams all over, and our favorite navigation app, Citymapper, works just as well there as it does in London), and, as you can see, there’s quite a lot of delicious food and drink options!