Greenwich is an area of London we had not yet explored, so we took today, a Sunday with no scheduled plans, to go do it. 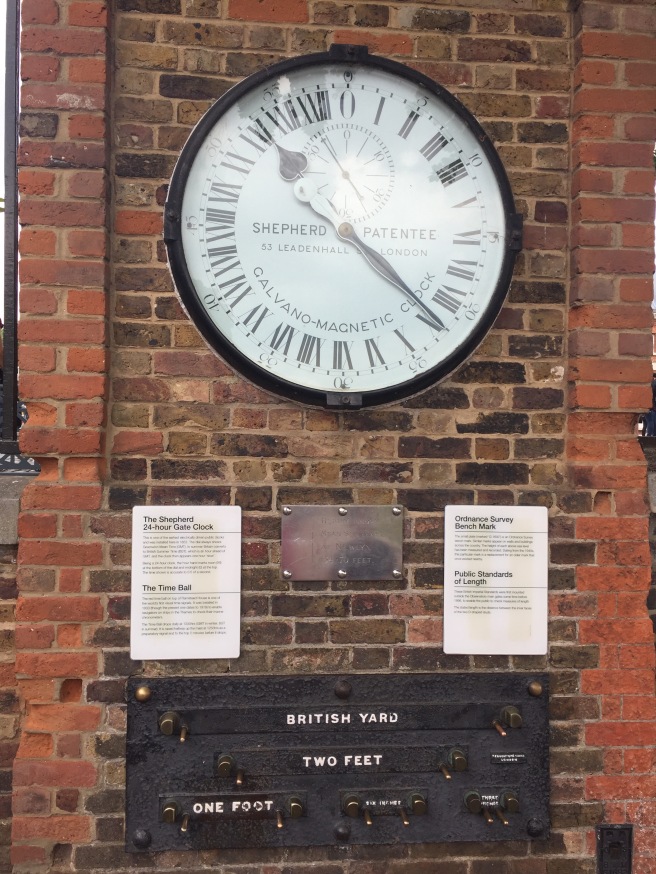 The namesake epicentre of Greenwich Mean Time (GMT), this is where you can straddle the Prime Meridian, where east meets west at Longitude 0º. 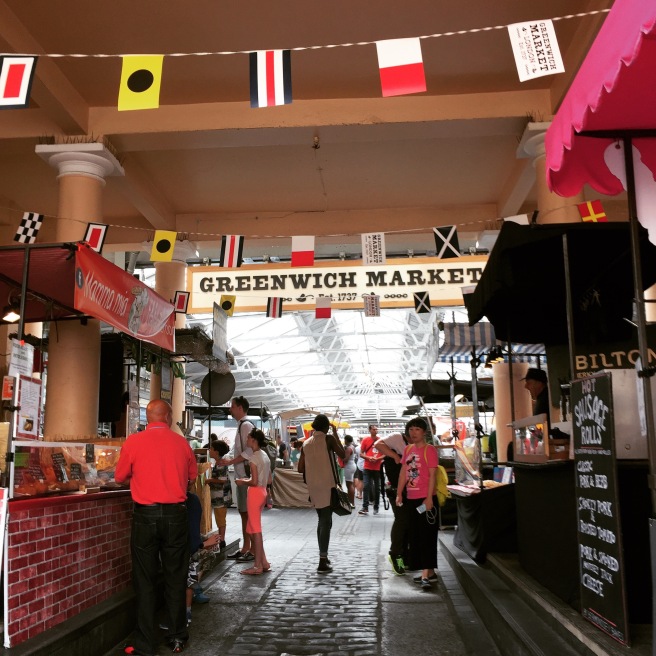 We started our day at the Greenwich Market, established in 1737. I don’t know what they sold back then, but today it’s a rather upscale set of craft and food stalls, with lots of vegan options. 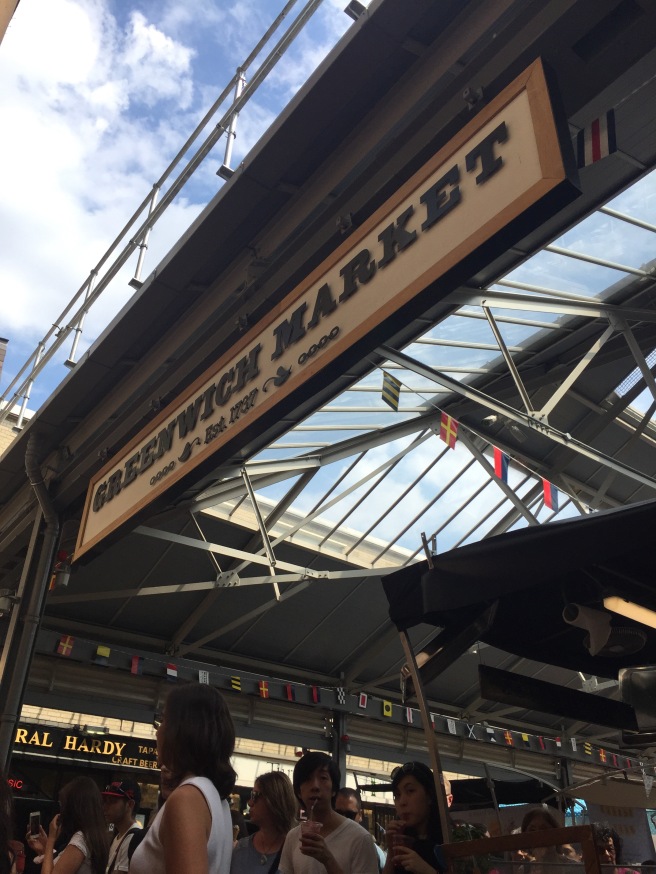 We picked up some food for a picnic lunch and walked into Greenwich Park, which is one of the Royal Parks, i.e., owned by the crown and not the city.

After we finished eating, we headed up the very steep hill to the Royal Observatory, home to the Prime Meridian and a pretty sweet view of London. 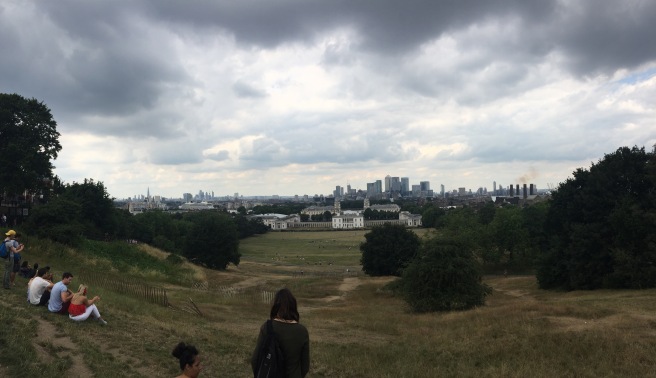 We didn’t pay to go into the observatory, but we did go into the astronomy centre and planetarium to use the loos, and touch a 4.5-billion-year-old asteroid. 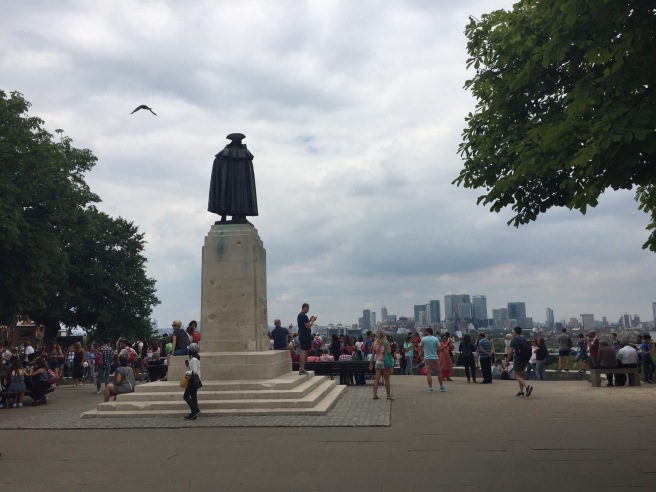 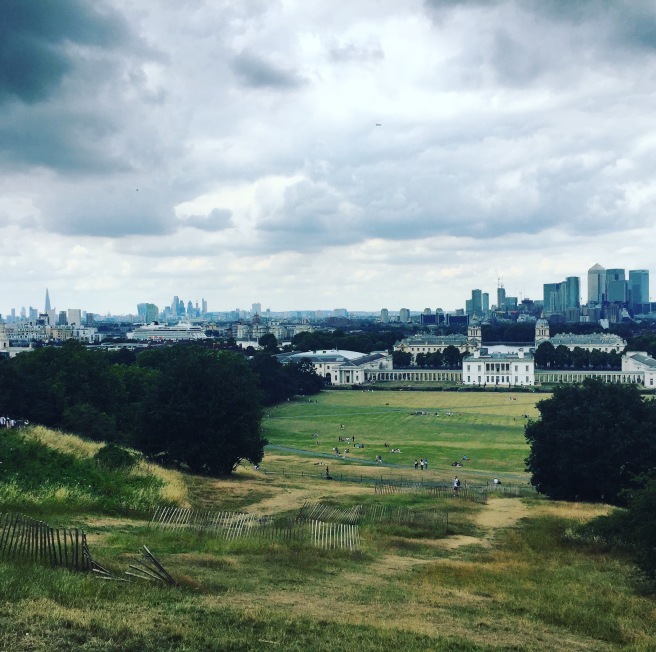 After walking around up there for a bit and admiring the view, we headed back down the hill and returned to Greenwich Market for some more browsing and a treat. (Ice cream cone for E, chocolate-filled churro for me.) 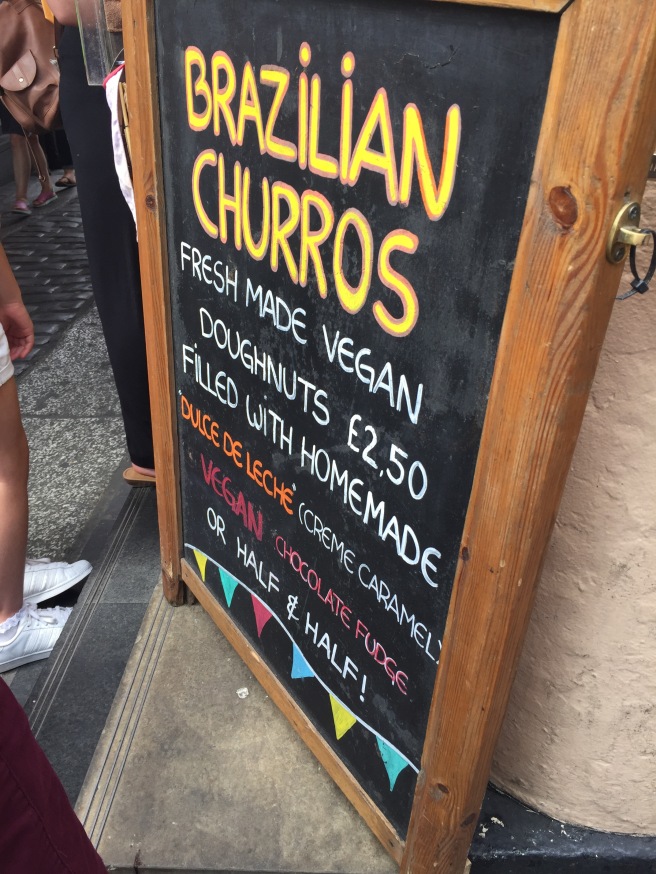 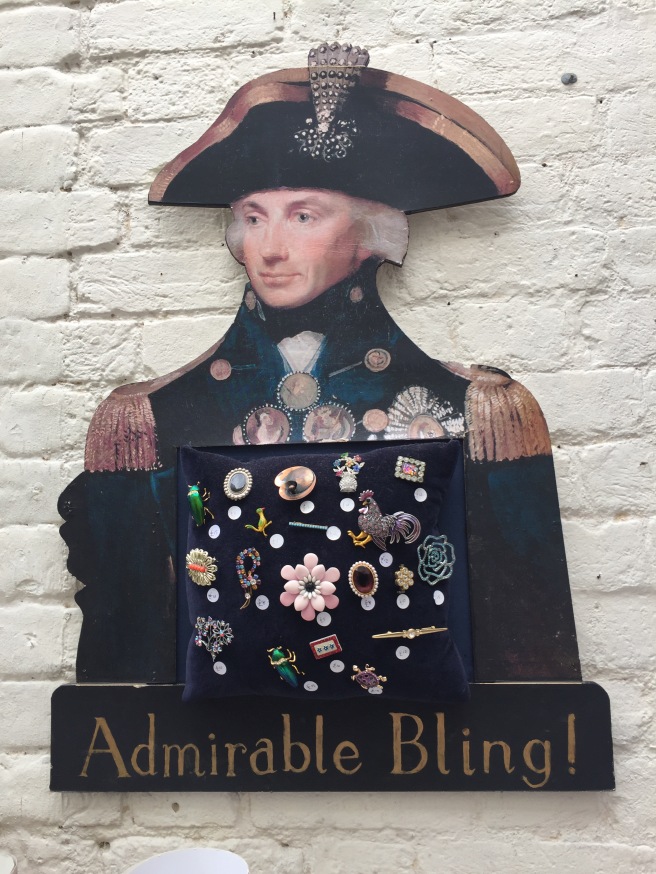 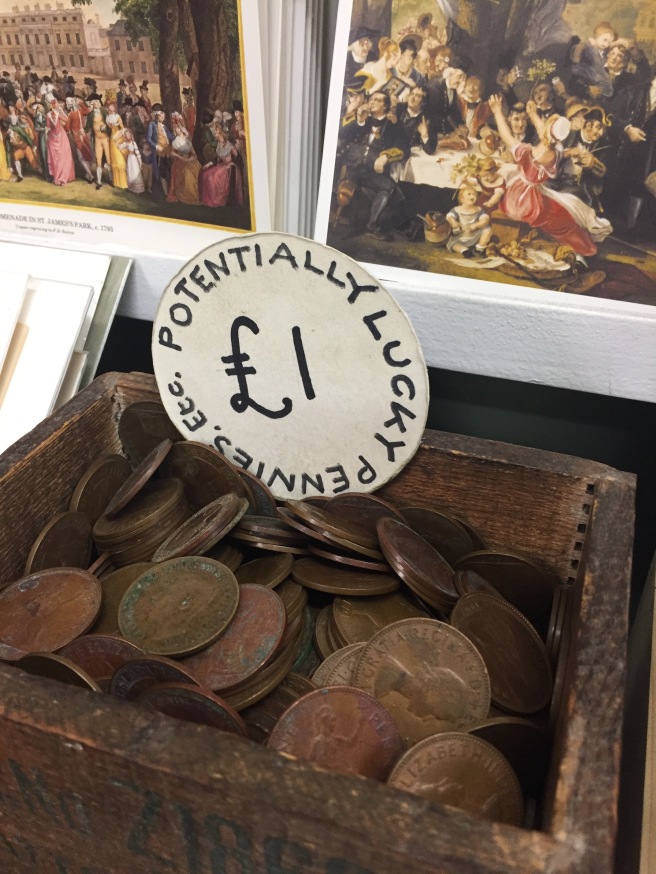 We went into an antique map shop and finally located an antique map of London that shows where we live, which we have been looking for every time we see a map shop! The map is from 1912 and shows our street, and all the surrounding areas we walk and cycle through. Sold.

The market had gotten quite crowded by then, so we left and walked to the river, and checked out the Cutty Sark, a historic sailing ship: “the world’s only surviving tea clipper, and the fastest of her time.” 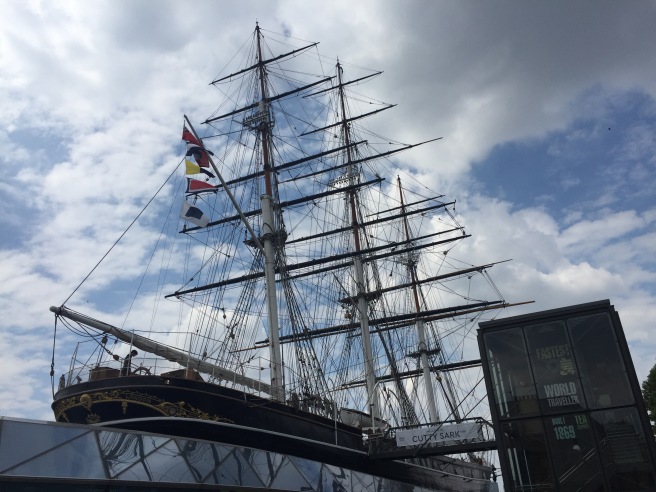 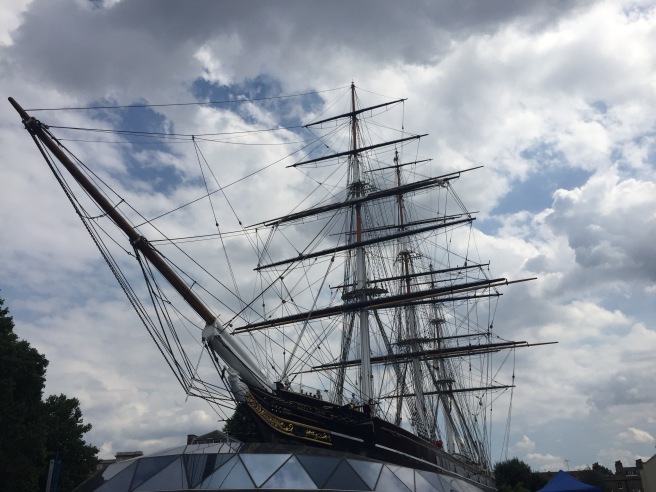 Again, we didn’t feel like paying the entry fee, so we just circled it and then wandered along the riverfront. 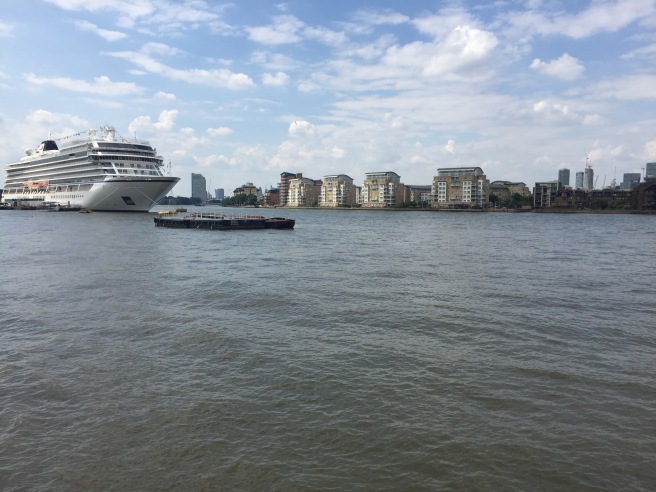 There was a little festival going on there today, a Latin American street food festival, and everything looked delicious. We had already filled up at the market, so we didn’t partake, though I semi-considered getting another churro… 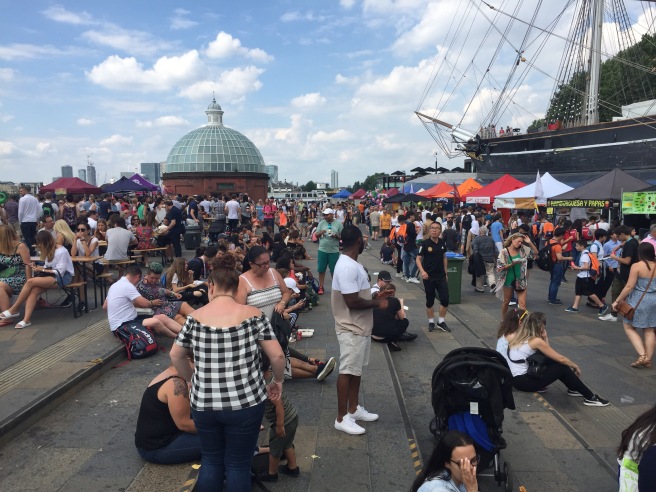 There are a few other tourist sights to see in Greenwich, such as the Queen’s House and the National Maritime Museum (entry is free to both, also true for the astronomy centre), but that would have been a bit too much for/with the kids, I think. Greenwich was a nice place to spend a summer Sunday in London; the market food, free museums, and amazing views from the top of the park definitely make for a pretty inexpensive tourist day.

Update: Spoke to a friend today about doing the day trip to Greenwich, and she recommended taking a Thames Clipper boat from Waterloo, as a fun way to get there. And she said the maritime museum actually has a soft play area for kids inside, so it is actually a good place to take the kids. Next time!