I’ve written before about the Bach to Baby classical music concert series for little Londoners, but I figured it was worth writing again, because I got tickets to one of the special concerts held at Buckingham Palace.

The musician for Monday’s concert was a harpist. But not just any harpist. Anne Denholm is the Official Harpist to HRH The Prince of Wales. Who knew he needed an official harpist? Well, now you know.

Since it was a concert for babies, there was a good amount of noise, rolling around on the floor, regurgitation, and boobs coming out going on in the audience. So just like any other time she performs at the prince’s parties. Badum-tss!

The music was lovely, and Baby R seemed to enjoy it, but I was a bit disappointed with the whole experience. I was expecting getting to do something really special, by getting to go inside the palace, but it was actually held in the Queen’s Gallery, which turned out to be, essentially, a small art museum at the palace that is open to the (admission-paying) public. I mean, still cool to say my baby has been to the palace, but it’s not like Princess Charlotte popped in for the show.

Afterward, we took a fairly quick stroll through the art exhibition, which at the present is on a Venetian painter, Canaletto. The art wasn’t really my taste, and ordinarily I don’t think I would have paid the admission to go see the exhibit.

It was such a nice day out that I decided to have a wander through St. James’s Park and pick up something for lunch and have a little picnic. I quickly remembered it is now summertime in London, so the park was buzzing with tourists who had just watched the Changing of the Guard. 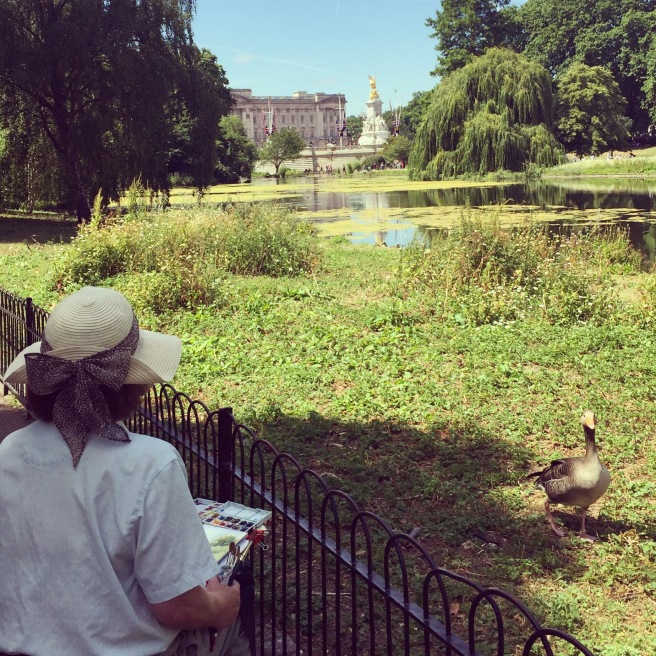 I like St. James’s Park. There are pretty views from this bridge in the middle: 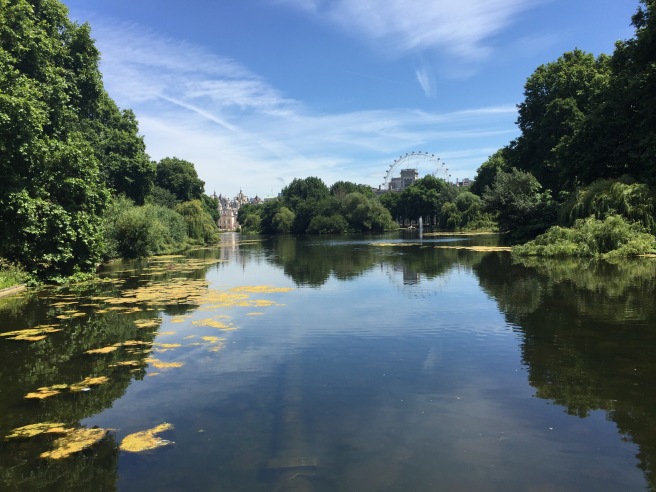 And I always enjoy checking out the queen’s waterfowl, and looking for the pelicans, which I had never seen before today! Out of the corner of my eye, I thought they were just more swans, but then their movements made me look again. They were really fun to watch. There were three of them, and they all swam together and dived together in sync. I like to think there is someone out there whose title is Official Pelican Trainer and Synchronised Swimming Choreographer to HRH The Queen.